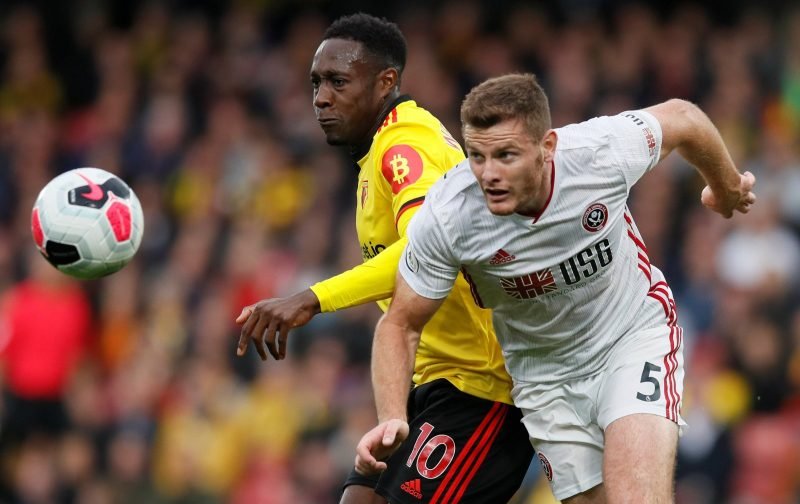 In a desperately disappointing game of football Watford and United had to both settle for a point each at Vicarage Road. The Blades controlled large swathes of possession but in truth never looked like scoring all game with a powder puff John Fleck shot and a Callum Robinson half volley both comfortable for Ben Foster. Watford looked desperately short of confidence and sat off United and defended for long periods despite being the home side. However, they created three golden chances and Gray, Welbeck and Dawson all should have scored with the last two being superbly saved from Dean Henderson who went from the villain to the hero inside seven days.

United named an unchanged side but had Billy Sharp back on the bench. Watford were without Etiene Capoue and also made changes up the top of the field with Deulofeu surprisingly left out and starts for Andre Gray and Danny Welbeck. Record signing Ismaila Sarr was also left on the bench.

The Blades dominated possession in the early part of the game with Baldock and Basham well advanced and Norwood dictating things. However, other than one corner that was cleared, United

Pererya somehow beat the offside trap as some of United’s defenders came out and some went back and he was in. He squared it across and with Henderson beaten Gray somehow blazed over the open goal. Whether he would have been adjudged to have been offside was another question but it was certainly a glaring miss. This had been out of keeping with United’s controlled start but more indecision saw Watford win a corner soon after.

United reasserted some control with Norwood starting to ping it about but they were not really penetrating despite winning another corner from some patient play. After this was cleared Basham’s looping cross saw Cathcart slice towards his own goal but Foster managed to push it behind even though it was not on goal.

O’Connell had to stop Gray getting in and Egan did likewise when Welbeck threatened to gain a yard of space. At the other end Fleck then had a good run but his shot lacked power and was easily saved. Basham’s low cross was just out of the reach of McBurnie. United had the better of the game but the game went into the break goalless.

The second half saw Welbeck get the better of Egan on halfway and with no cover, the ex England man was in and had an age to decide what to do but with options to his left also, he chose to take on the shot and Henderson stood up big to divert the ball away. It was reminiscent of his save against Salah last week.

United finally had an effort of note when Lundstram’s cross was nodded down by McBurnie and Robinson hit a fierce half volley but it was straight at Foster. McBurnie was booked and then taken off with Mousset coming on. Sharp then came on for Robinson and Watford also made a flurry of changes going with two wingers up top in Sarr and Deulofeu for the ineffective Welbeck and Gray.

The game was now really lacking in quality with both teams giving it away but the other side unable to profit. Henderson pouched a cross from Deulofeu and then Sharp’s cross was cleared with Mousset not able to react. However, it did not seem like either side had the quality to break the deadlock. Lundstram was booked for stopping a breakaway and the game then entered four minutes stoppage time. Watford ended the game with another great opportunity. Mousset’s obstruction saw Watford win a free kick and the delivery was perfect from Deulofeu. Substitute Dawson seemed set to score but his header lacked direction and Henderson pushed the ball away. United went down the other end and a ball cannoned around the box but was cleared and the final whistle went straight after this.