Will Wilder Ring in the Changes ahead of Cup clash?

Sheffield United take a much-needed break away from Premier League football with the participation of facing Bristol Rovers in the third round of the FA Cup at the Memorial Ground.

Blades boss Chris Wilder may have something of a selection headache with a list of injuries. United should welcome back John Lundstram who has been absent for the last three games against Everton, Burnley, and Crystal Palace, due to suspension but is available for selection at Bristol Rovers. 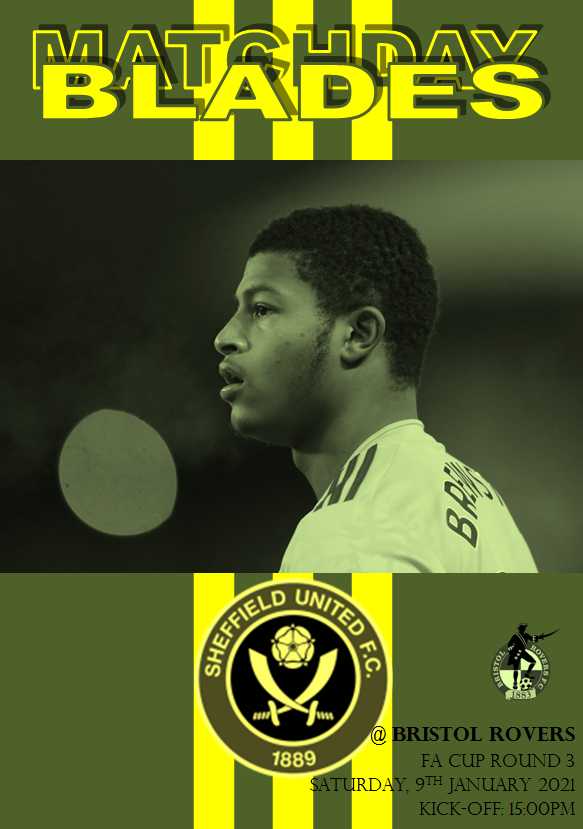 At the time of writing this game is going ahead. By the time that the game gets to kick-off, in lieu of new government regulations, football across the country may be suspended.

They are without defenders Jack Robinson (unknown), and Jack O’Connell (knee), through injury. The latter has undergone surgery and is likely to start training again soon with no date for a return set as of yet. The Blades are also without midfielder Sander Berge, who is sidelined with a thigh injury he sustained in the 3-2 defeat to Manchester United on 17 December and is expected to be sidelined for up to three months. Meanwhile, Phil Jagielka has also been ruled out for an unknown reason.

In the middle of the park, Wilder may recall John Lundstram after serving his suspension to play alongside Oliver Norwood and Ben Osborn, though Ethan Ampadu and John Fleck may be involved in the squad also.

Recent news surrounding Lys Mousset may also rule the French forward out after his car was found to be involved in an incident last Monday. Fellow strikers Billy Sharp and Oli McBurnie (knock) are also ruled out, though the latter may take a late fitness test.

Chris Wilder will be forced to make a change that is for sure, but he may make as many changes as possible as to give the first-team regulars a rest. He may stick with first-choice keeper Aaron Ramsdale or replace with second choice Belgian stopper Michael Verrips.

In defence, the Blades are likely to remain with first-teamers Chris Basham and John Egan, with Kean Bryan joining the three centre-halves. Though forgotten man Jack Rodwell, who can also operate in midfield, may earn a rare call-up, whilst Jayden Bogle and Max Lowe may deputise as wing-backs.

United will lay thin on the ground attacking wise, with only Rhian Brewster, Oliver Burke, and David McGoldrick available if Mousset is unavailable. In last week’s defeat at Crystal Palace, the Blades brought on Antowaine Hackford for his debut and may be included again at the Memorial Ground. 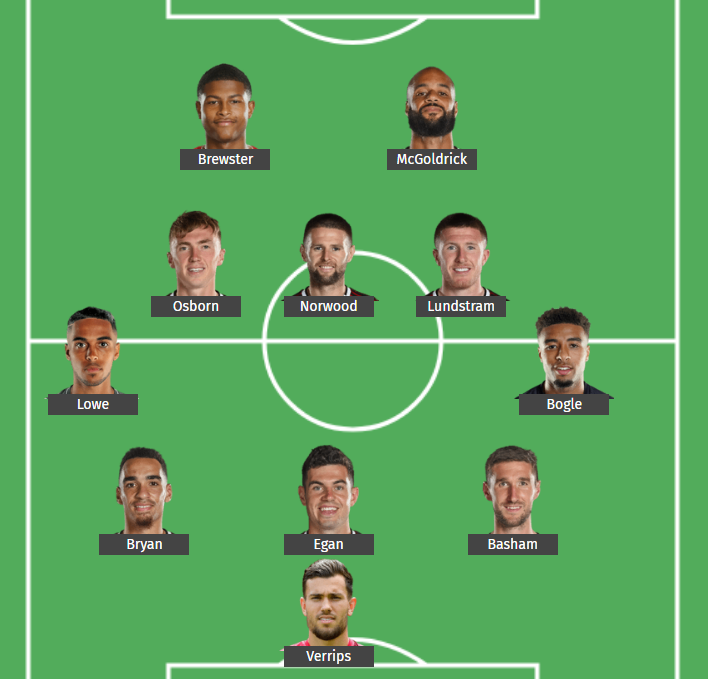 The two teams have met only once before in the FA Cup, this was in the First Round on 3rd November 2012. United won the tie 2-1 but had to come from a goal behind after Rovers had taken an early lead after David Clarkson drilled past George Long after 5 minutes played. Under manager Danny Wilson, the Blades responded in the second half as Nick Blackman collected Chris Porter s pass on 53 minutes to finish from a narrow-angle. Nine minutes later Porter grabbed the winner after Neill Collins headed down to tee up the attacker. United went onto beat Port Vale (2-1), and Oxford United (3-0) in the following two rounds before bowing out in Round Four at Reading (0-4).

Since then the two teams had met in the league en-route to the Blades League One Championship winning title in Chris Wilder’s first season in charge. Harry Chapman scored the game’s only goal as Sheffield United beat Rovers at Bramall Lane on 27th September 2016, but in the return fixture on Valentine’s Day, the pair drew 0-0.

As well as forging a good finishing position in the Premier League last season, the Blades had a good run the FA Cup and made it to the Quarter-Finals

Sheffield United’s route to the Quarter-Finals has been pretty straight forward. Goals from Callum Robinson and Leon Clarke were enough to ease past non-league AFC Fylde in a 2-1 victory at Bramall Lane in round 3. A 2-0 win was recorded in the capital as Mo Besic’s thunderous shot helped beat Millwall in the following round.

United faced a more tricky time in Round 5 at Reading, previously, the Blades had recorded four straight forward victories, but despite David McGoldrick notching his first goal of the season, United required extra-time after George Puskas despatched his spot-kick. In the additional 30 minutes, Billy Sharp netted the winner.

The Quarter-Final tie at Bramall Lane pitched the Blades against Arsenal, whom they had lost to in the 1936 FA Cup Final. United was again on the losing side but unfortunate not to force extra-time after David McGolrick scored on 87 minutes, cancelling out Nicolas Pépé’s first-half penalty. With extra-time looming, and in the first minute of stoppage time Daniel Ceballos squeezed home a late winner. United’s cup dream was over for another year but Arsenal would beat Manchester City in the semi-final before beating Chelsea 2-0 in the final. 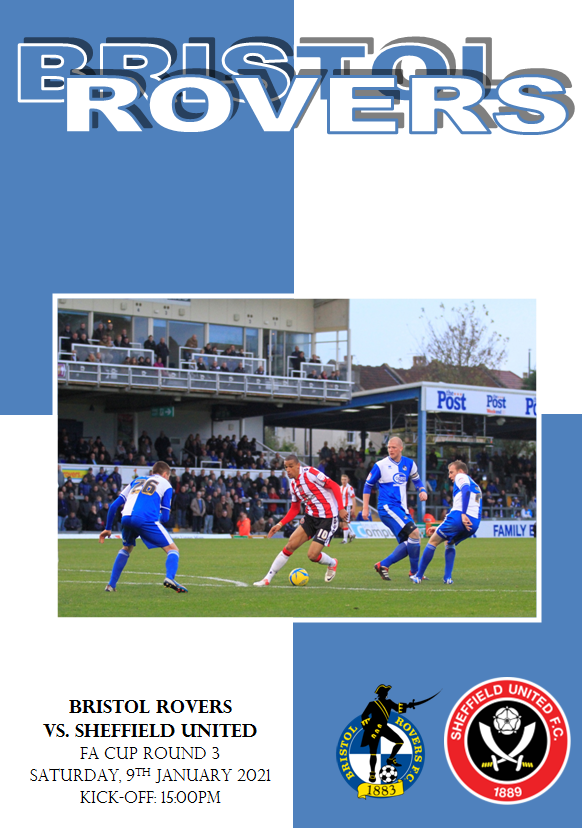 SkyBet League One side Bristol Rovers will no doubt fancy their chances when they host a struggling Sheffield United, who have yet to win a professional match this season, in the FA Cup Third Round tomorrow (kick-off: 3 pm).

Bristol Rovers journey in the FA Cup has been a simple one. They eliminated Walsall in their back yard in Round One. Jack Baldwin and Brandon Hanlon had guided the Pirates into a two-goal lead. Former Blade Caolan Lavery responded with three minutes remaining but it wasn’t enough. In the Second Round, they comfortably beat non-league minnows Darlington 6-0 at the Memorial Ground.

Rovers boss Paul Tisdale has the benefit of having a fully fit squad with no injuries to their line-up.

Last season the Pirates made it to the Third Round stage, bizarrely, all of their games went to a replay. Having started in Round 1 they beat non-leaguers Bromley 1-0 in a replay after drawing 1-1, before disposing of Plymouth Argyle by a single goal, again following a 1-1 draw. In Round 3 the Bristol club drew 2-2 at home to Coventry City, before losing 0-3 to the Sky Blues in the replay at St Andrews (home to Birmingham City).

In the league, they have made a heavy whether start but despite seeing several fixtures postponed, they have won three out of their last five league matches, including their last encounter at home to Blackpool (2-1). They currently sit 18th in the table and are three points better off than the final relegation spot.