Three of the Best: Past Sheffield United games in Round 3 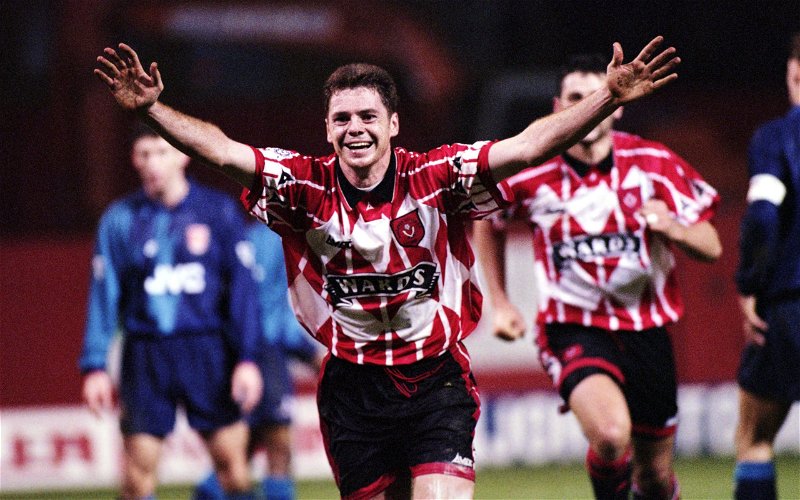 Sheffield United face Premier League outfit Wolverhampton Wanderers, where, as underdogs, will be hoping to return to Bramall Lane as victors after claiming what is a potential banana skin. United have claimed many historic victories over the years in this glorious FA Cup. We take a look at three epic Third Round victories.

The Blades have won the FA Cup 4 times in their history, but haven’t appeared in a final since 1936. Each year every club believes it will be their year, some more than most! The last time that United came close to a place in the final was in 2013 when, as a League One side, they made it to the semi-finals. En-route, they defeated Aston Villa in round three at Villa Park. Surprisingly, we have chosen not to include this victory in our epic trio of Third Round victories, but who can recall cup victories over Arsenal, Bolton Wanderers, and Queens Park Rangers.

United’s cup scalp in the mid-1990s against Arsenal was, perhaps, one of the most memorable during that decade, and, perhaps, the most enjoyable for United were in a terrible period of transition following the exit of former boss Dave Bassett the previous month, whilst the club was going through financial issues and Bramall Lane remained a three-sided ground, with work on the John Street Stand yet to began.

Howard Kendall had been installed as manager, but despite positive performances, the Blades remained in the relegation zone ahead of a tough third-round tie at Arsenal. United had held their own at Highbury against Bruce Rioch’s side and commanded a 1-1 draw, with Dane Whitehouse netting on 78 minutes, cancelling out Ian Wright’s 70th opener, to set up a replay at S2. 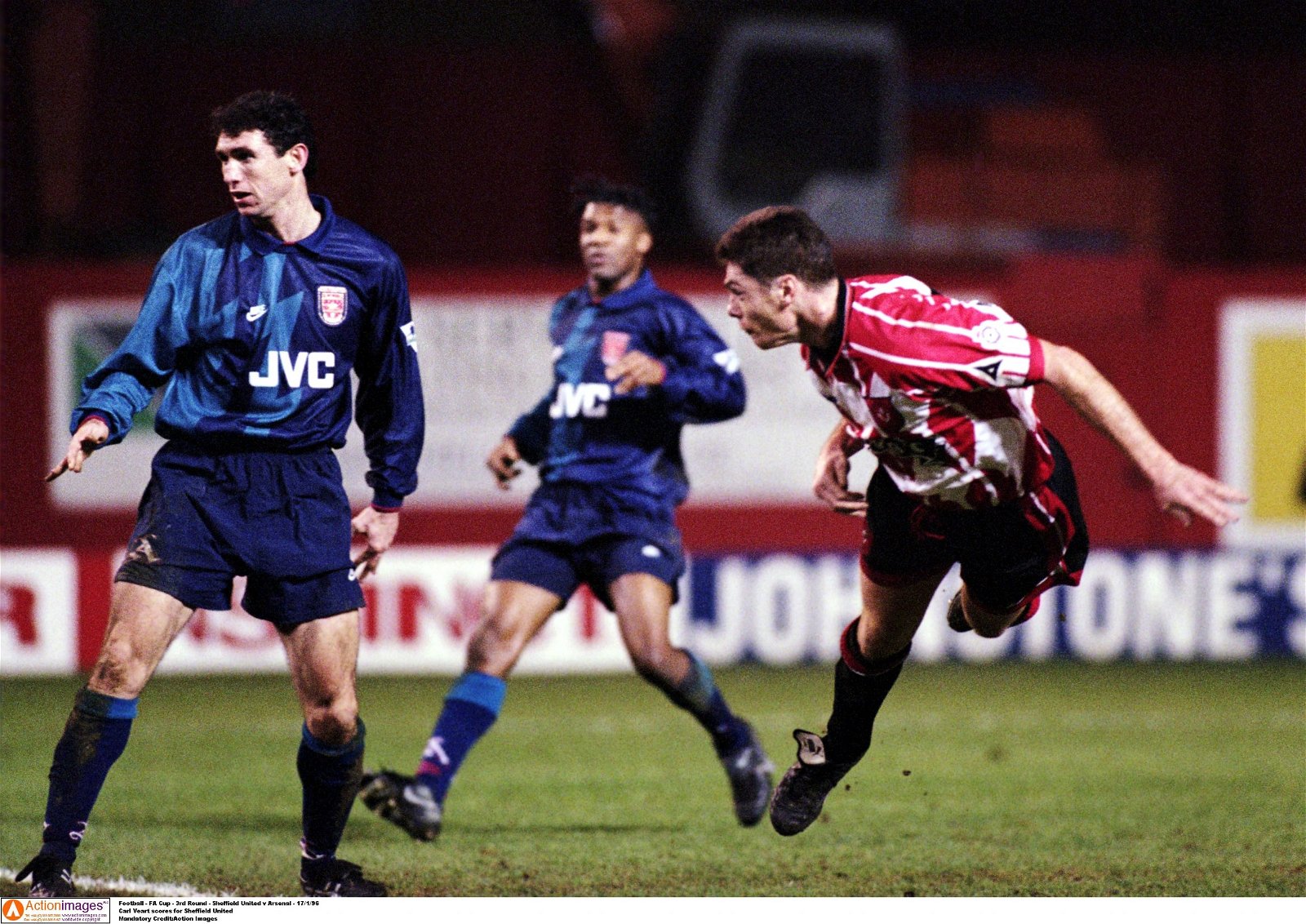 This fixture took place before the Arsene Wenger era; the Gunners were still a formidable force in the Premier League and regularly earning a European place. They had also been double cup holders in 1993, winning both the FA Cup and League Cup trophies.

The replay produced one of those magical nights of football (under the floodlights). Despite the sparse crowd, it was a roaring atmosphere where United turned the table and via a stunning Carl Veart header in front of the Kop, United claimed a historic victory.

The 2007-08 season will be best remembered for a famous FA Cup tie against Manchester City, however, before that they were 1-0 victors at Premier League Bolton Wanderers, earning a massive banana skin scalp as a Championship club.

Odds were stacked against the Blades against a talented Trotters side, but Bryan Robson’s Blades made it into round four with an excellent from Australian winger David Carney three minutes before the break. 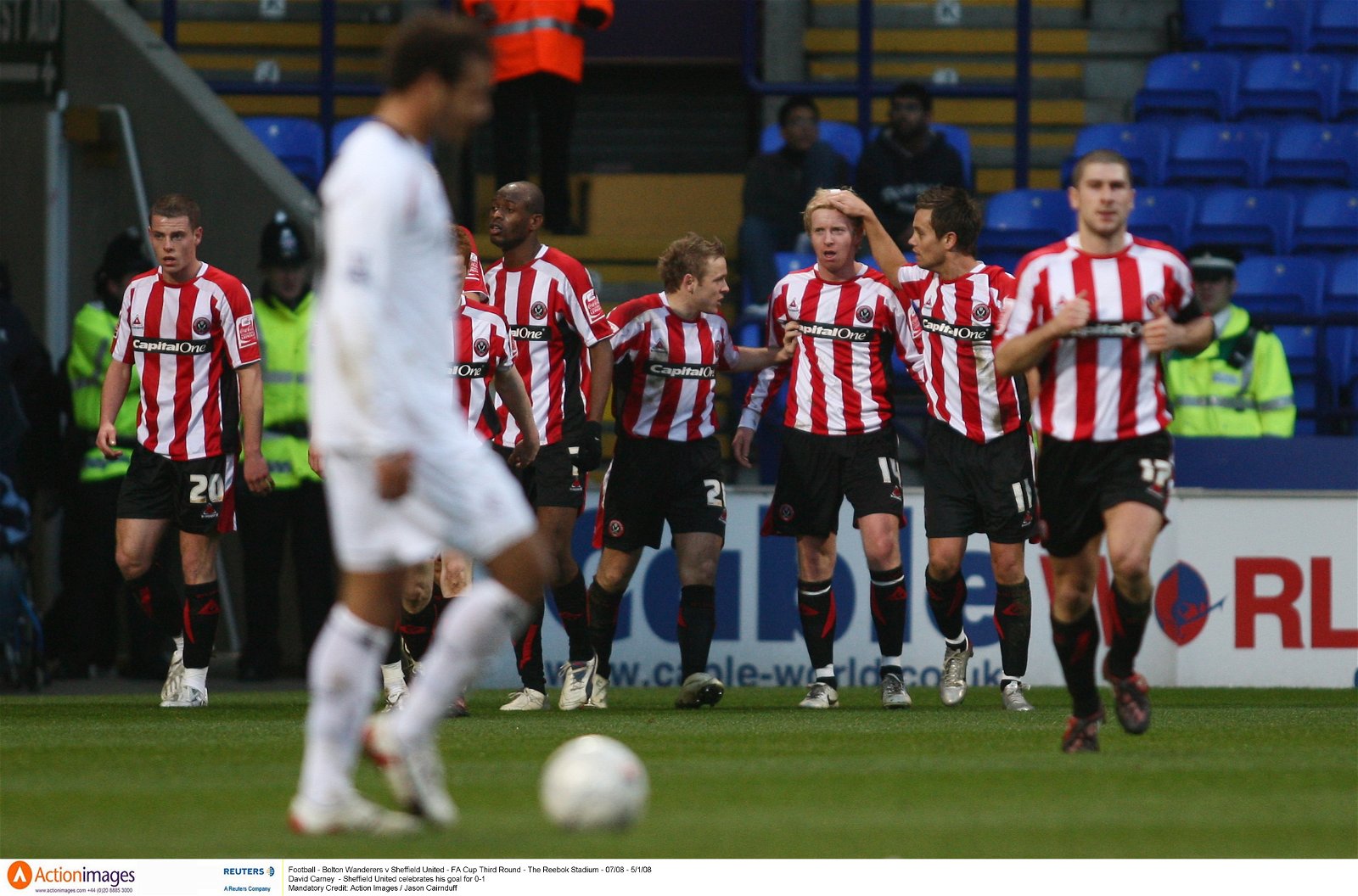 A spirited United performance had subdued Wanderers to only a few chances, though Danny Guthrie drew out an excellent save late on from Paddy Kenny, whilst the Blades squandered an excellent opportunity early on after Luton Shelton headed over the bar from six yards.

Following their victory at the Reebok Stadium, United famously defeated Manchester City in round four, before cruelly suffering defeat in a round five replay at Middlesbrough.

Having successfully claimed FA Cup victories over Crewe Alexandra (which required a replay), and Plymouth Argyle in rounds One and Two before the League One side was pitted against Premier League outfit Queens Park Rangers at Loftus Road.

After claiming a semi-final place the year previously, any cup run would prove difficult to top, but Nigel Clough exceeded all expectations by claiming victory at difficult opposition. United guided into a 1-0 lead at the break after a fine move was started, and completed by striker Marc McNulty on 36 minutes. The Scot collected the ball on the halfway line before neat passing between Jose Baxter and Louis Reed saw them split the Rangers defence in two and McNulty coolly finished past Alex McCarthy in the home goal.

The second half saw Jamal Campbell-Ryce capitalise twice on defensive errors to book a place in round four. On 49 minutes, a spilled corner from McCarthy saw the winger with the ease job of finishing in an empty net. And, four minutes into stoppage-time, a foolish header back into the box from a QPR defender, saw Campbell-Ryce collect, and on the angle, he rounded the keeper and slotted home.

The Blades FA Cup journey would end in round four at home to Preston North End, losing 3-1 in a replay, following a 1-1 draw at Deepdale.