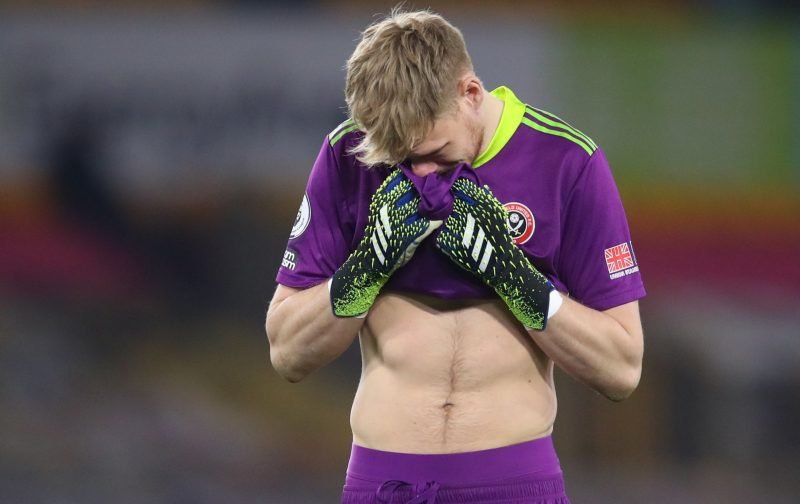 Sheffield United’s Premier League fate was sealed at Wolverhampton Wanderers in a 1-0 defeat at Molineux. The defeat mathematically results in the Blades unable to save themselves from relegation and will play SkyBet Championship football for the 2021-22 season.

With Newcastle United already claiming victory over West Ham United earlier in the day, Sheffield United travelled to Molineux later that evening with deep knowledge that anything less than a victory would rubber-stamp the Blades relegation from the Premier League. The game had initially been scheduled to kick-off at15:00PM but had been moved to a later time as not to clash with the funeral proceedings of Prince Phillip, the Duke of Edinburgh. 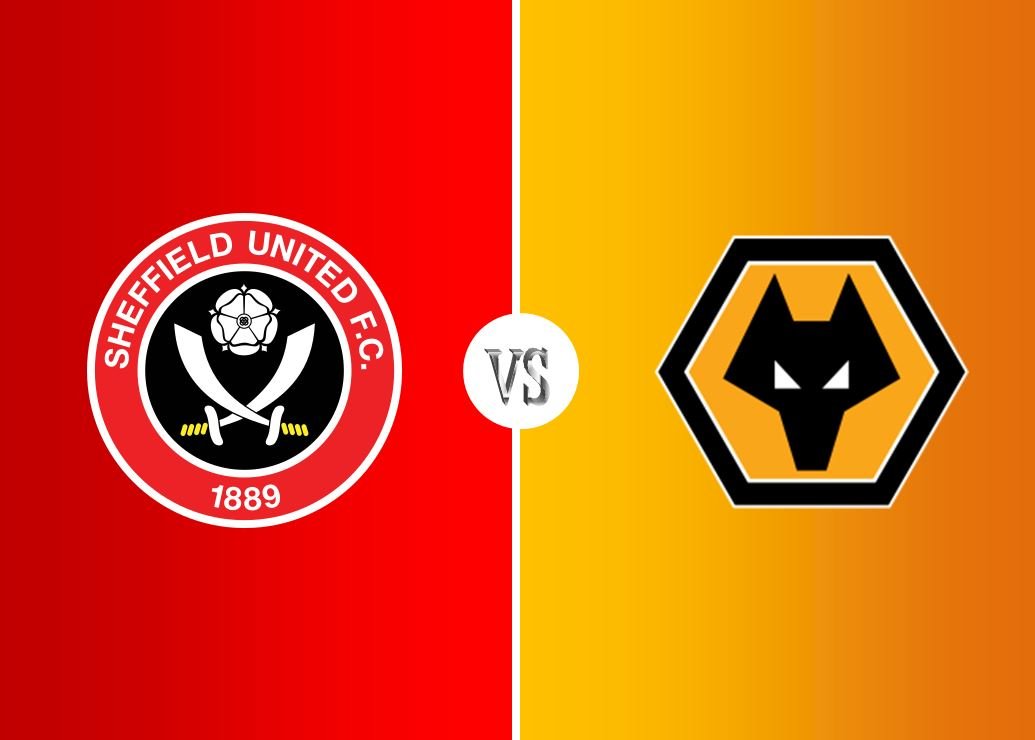 Hampered with seven injuries, the Blades faced Wolverhampton Wanderers without strikers Billy Sharp, and Oli McBurnie, who was sidelined for the season. Rhian Brewster partnered David McGoldrick in attack, with John Fleck, made his 200th United appearance, operated in midfield as interim manager Paul Heckingbottom once again operated a 3-5-2 formation.

This fixture on the opening day of the season seven months ago saw the Blades fall to a rapid two goals behind within the first six minutes and they failed to come back from that swift setback. There was to be no ill repeat this time around as the Blades marshalled past the ten-minute mark without any cause for concern. On 11 minutes the visitors came close to causing an early upset when a well-worked ball on the right saw George Baldock cross to the near post with Romain Saiss almost turning into the Wolves goal but keeper Rui Patricio evaded any threat.

However, on 20 minutes Wolves almost took the lead through bizarre circumstances. A looping corner saw Willy Bony back heel, the ball looped over keeper Aaron Ramsdale but Oliver Norwood was well positioned on the line head the ball up against the crossbar with the keeper collecting. At the other end, Fleck drove a ball from distance wide.

The game turned flat with neither side penetrating the opposition defence. At the half-hour mark Daniel Podence half-volley over the bar from a distance from Adama Traore’s knockdown. There was brief drama five minutes later when a VAR check for a red card resulted in Brewster cautioned with a yellow.

The first half drew to a close goalless with neither side being able to cause any damage on their opposition.

No changes were made by either side at the break. The second half was much like the first 45 minutes of football, with a slow build-up with little produced in the final third. The game kicked into life when the hosts took the lead on the hour mark, but not before Enda Stevens saw his goal-bound effort blocked by Nelson Semedo. Wolves broke away through Traore and his ball across the box was lashed home by WILLIAN JOSE for his first goal in his clubs’ colours.

For their efforts, it was the least that the visitors deserved but the reality was that, should the result remain in Wolves favour at the full-time whistle, then the Blades would be relegated on a day which Norwich was promoted. 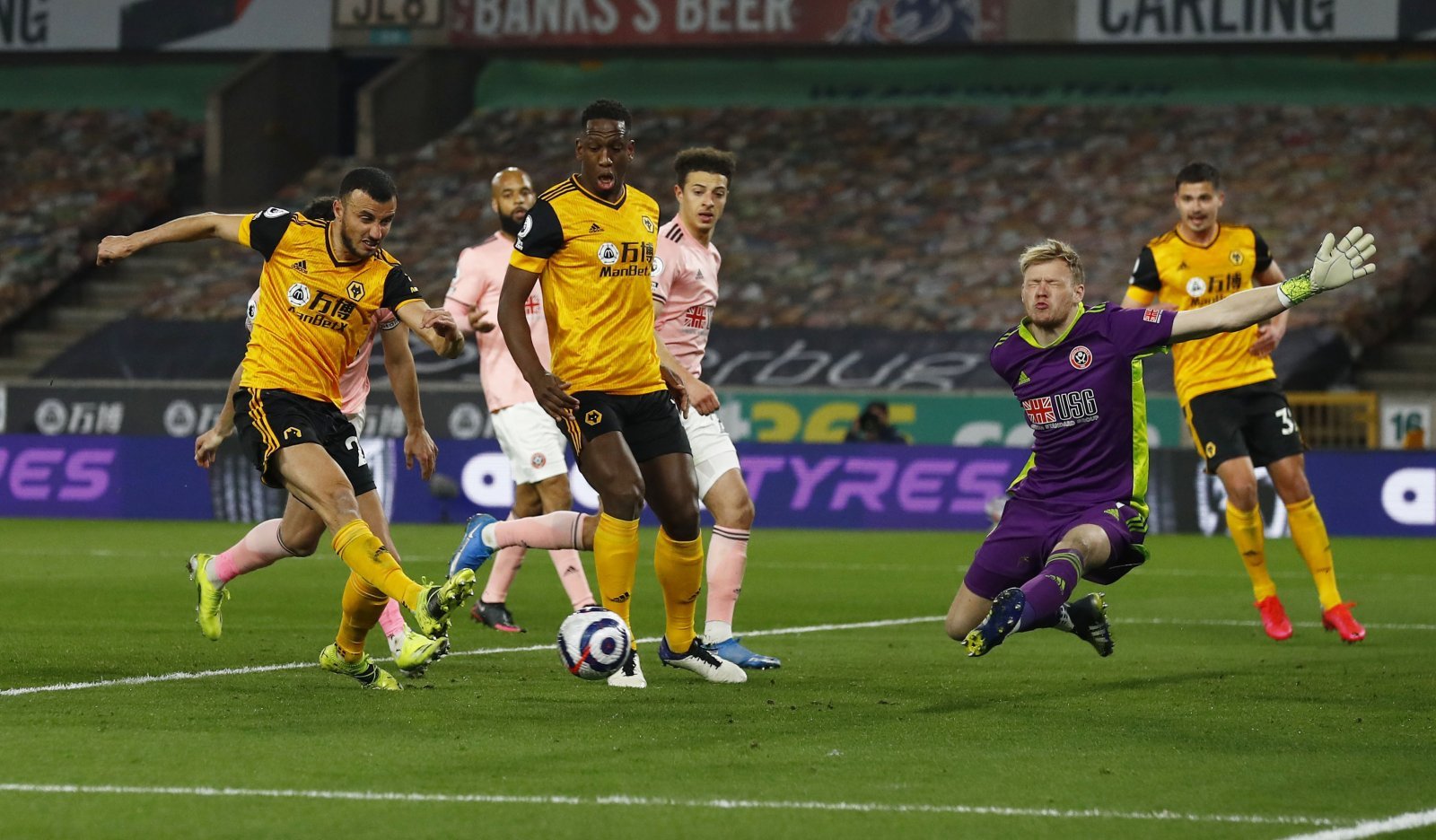 United responded well despite falling behind and the hosts’ keeper had to be on his guard on 69 minutes to flip George Baldock’s stunning drive over the top. On 73 minutes the Blades made a double change with Lys Mousset and Oliver Burke replacing Ben Osborn and Rhian Brewster as the visitors searched to salvage something from the game. United flung a free-kick into the box that was easily collected by the keeper before the hosts made their first substitution of the evening with Fabio Silva replacing the scorer Willian Jose.

With twelve minutes remaining, United came agonisingly close, only to be ruled out by an offside flag. McGoldrick’s neat ball found Mousset and his ball across the box evaded everyone with Norwood smashing the ball at goal that the stopper kept out and Burke was unable to scramble home the rebound.

Moments later Ramsdale made a big save after he kept out Saiss effort from close range following a free-kick. United then broke away but Stevens miss-timed his pass to Burke, it was heavy and easily collected by the keeper. On 82minutes the Blades made their final change as Ampadu exited for Jayden Bogle.

The remaining minutes saw the Blades fail to penetrate the hosts final third as Wolves broke away twice but couldn’t apply any further damage to the score-line. Ramsdale easily collected substitute Silva’s tame effort before Traore flashed wide his effort.

The officials added four minutes of stoppage-time before blowing the final whistle to condemn the Blades to Championship football next season.