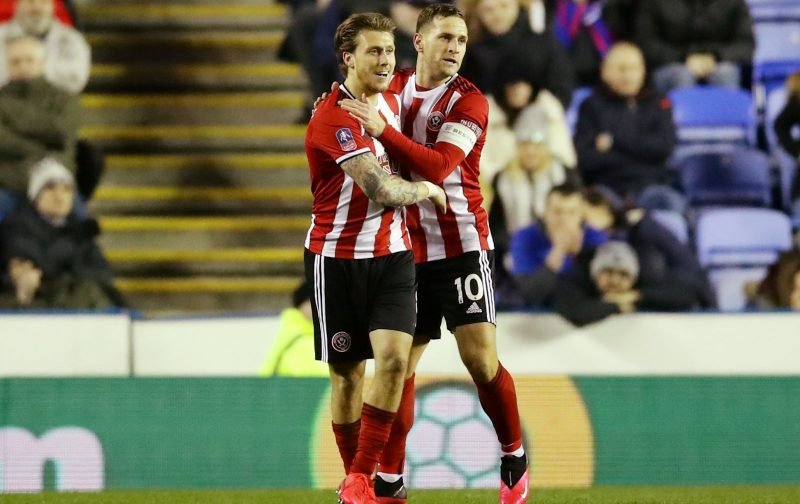 A trip to Manchester United was always going to be a difficult task, especially when playing in 30 degrees temperature and a stadium without fans, but for the second successive fixture, United succumbed to a 3-0 loss with Anthony Martial grabbing his first hat-trick for the club.

Chris Wilder opted to make five changes from the side which had lost at Newcastle fours days previously. Goalkeeper Dean Henderson, on loan from the Redd Devils, wasn’t eligible to face his parent club, therefore, Simon Moore deputised. He last played for United in the reverse fixture earlier this season which ended 3-3.

United was also without John Egan through suspension. The experienced Phil Jagielka, who signed a new contract took his place. There was also a change in midfield with Oliver Norwood replacing Sander Berge.

Also, Wilder opted to change the front two. Billy Sharp and Oli McBurnie were dropped to the bench in place of Lys Mousset and David McGoldrick.

Chances throughout the game were few and far between for United against a dominating Red Devils side. Having failed to claim a victory in these first three matches played, finishing in a European spot is becoming more of an improbability, however, the Blades supporters can rest easy knowing that they’ll, at least, be surviving their first season back in the Premier League with considerable ease.

United had started well in the earlier exchanges and despite fielding a changed side, the familiar 5-3-2 formation looked to be working, with the Blades playing close controlled football. That was until 6 minutes when the hosts took the lead. A throwing near the corner saw Marcus Rashford fire a quick ball into the near post and MARTIAL beat Jagielka to slip past Moore.

On 11 minutes it was almost 2-0 but not before Baldock advanced round two players on the box but his shot was blocked. De Gea then cleared the ball and as scorer Martial raced through one-on-one he knocked the ball square to Rashford, and with the goal at his mercy, somehow knocked the ball wide, possibly, from the distraction of Robinson’s challenge.

The Manchester side continued to have the majority of possession, and on 17 minutes Moore was forced into a save when Fernandes free-kick from the left on the angle was fired straight at goal.

When the hosts did have the ball in the back of the net, both referee and VAR ruled out the goal. This was on 20 minutes where a corner was headed home bu Harry Maguire but he was judged to have pushed Jagielka in the build-up.

The visitors continued to soak up pressure until a much-needed water break allowed the Blades to re-group. United improved in play and after Lundstram blasted over on 30 minutes, they were able to get more balls into the box but unable to apply that finishing touch.

7 minutes before the break United thought they were going forced into a change when Mousset went down injured. He was going to be replaced by McBurnie, who scored the equalising against Manchester United in October, but the French striker returned to the field with no substitution made.

On 44 minutes the hosts doubled their lead. Good play around the box by Fernandes was played out onto the right and the ball into the box was played in by Wan-Bussaka with MARTIAL applying the finish.

Moore collected Greenwood’s tame effort and in stoppage time, the hosts cleared away a United corner before the referee blew his whistle.

The last time Sheffield United were 2 goals down at half-time was at Chelsea, which they went onto draw 2-2 in an explosive second half. But, despite playing football which the supporters have become a custom to, it just wasn’t to be.

Sheffield United started the second half with Chris Wilder opting to make a double change. Oli McBurnie finally came on as did Sander Berge, they replaced the Mousset and Norwood exiting.

United started the restart well and, after 4 minutes, when the ball was played into the box McBurnie missed his header and the ball was cleared for a corner.

On 55 minutes al busy United box saw Greenwood eventually jinx and find space but his effort took a deflection and curled around the right side of the post.

The Blades struggled to get into the game, though they played well on the ball when they gained possession. Martial blasted over and, on 64 minutes, United made another change, this time McGoldrick made way for Zicovic.

Shaw was booked soon afterwards when his header was intercepted by Lundstram on the halfway line, and he was hacked down by full-back after the midfielder pealed away.

Despite United applying that dogged Yorkshire grit, and didn’t give up the ghost, on 74 minutes the game was put beyond the visitors when Rashford’s neat pass saw MARTIAL clip the ball over Moore for his first Manchester United hat-trick and put the Blades 3 goals behind.

Shortly afterwards the hosts made five changes in one substitution. Martial, Pogba, Rashford, Greenwood and Fernandes. They were replaced by Mata, Periera, McTominay, Ighaoa and James.

Moments later McBurnie’s flash effort from outside of the box was tame and failed to test the Spanish keeper.

The closing minutes saw the hosts apply further pressure, and Moore, who in contrast performed well throughout, did enough to prevent Igahlo from extending their lead at close range, with the final few minutes casually played out without excitement.