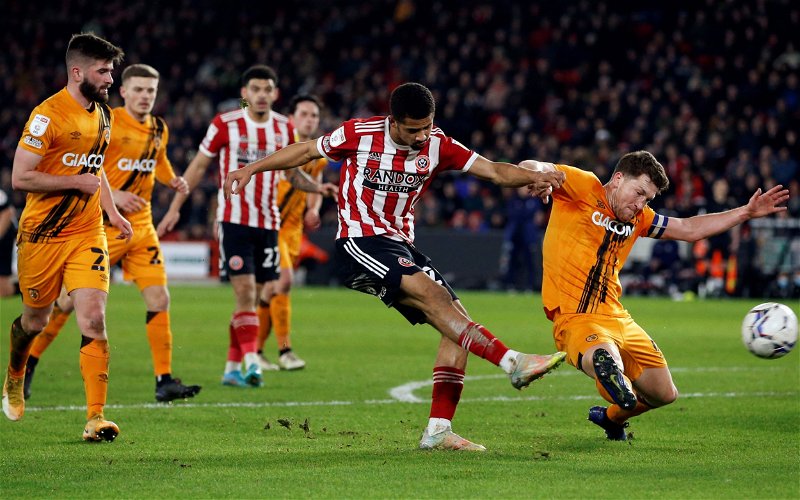 Sheffield United’s playoff hopes took an upward turn this week as they managed to eke out a 1-0 win against Cardiff at Bramall Lane. After a nervy first half where the visitors could have led before the Blades missed two good chances of their own, the home side improved after the break. Ndiaye’s excellent header from Gibbs White’s centre proved to be the difference. United could and should have gone on and scored more as they controlled most of the 2nd half but in the end, Berge’s late shot that hit the post was the closest, they came but, in the end, saw out the game with relative comfort. With other results largely going United’s way, it now seems to be a straight fight between three sides with Millwall and Middlesbrough the other two in the hunt. The Lions’ 98th-minute leveller could be vital in the long run but United now know that if they get 4 points from the final two games, they will be at the end of season dance.

Heckingbottom had to make one change with Baldock deemed not fit and Osborn went in at right-back. The Blades boss decided not to risk Sharp from the start and went with Gibbs White and Ndiaye as the most attacking players again. Cardiff with nothing to play for continued to rotate and started some young and fringe players leaving a fair bit of experience on the bench as Morison looked to next season.

The game began with the weather being overcast and with the wind swirling around as the sun was trying to emerge from the clouds. It was another big crowd in the Lane but once again the home side looked nervous and an early cross from Leeds loanee Drameh had to be fielded from Foderingham.

Denham played a ball over the top and as Hugill helped on, Watters was clear as Egan could not make it and the Cardiff man was clear but his effort was really weak as he advanced one on one with Foderingham and the keeper made a very important save. However soon after the keeper was not as assured as he kicked a ball straight out to Watters but the striker made a mess of it again and this time could not control the ball.

United could not get going and it seemed very similar to the Reading game just over a week ago where the home players looked sluggish on and off the ball. However, at the quarter of an hour mark, a good link-up saw several players involved as Gibbs White, Ndiaye and the Berge linked and the ball deflected to Osborn who hit it on the half volley but Phillips did well to get across and parry away.

United was seeing a bit more of the ball but making poor decisions and taking too long to move it and the game became scrappy for a spell but United then forged another chance as Gibbs White, who always looks the main threat, dinked a ball over for Berge who seemed to try and hit it the first time but ended up controlling it and then trying to steer it home but Phillips went down well to smother. It was a good chance and one the Norwegian should have done better with.

The game lacked any fluidity either way and was a very stop-start but Berge was starting to become more involved and his gliding run saw him get in and fire across the goal but Phillips got a slight touch and managed to palm it behind.

Cardiff cleared and threatened with a break but Norwood and then Fleck managed to get touches to stop the opportunities. The passing was very inconsistent and the game seemed to have an end-of-season feel for both teams with mistakes aplenty on the ball. Cardiff had not offered too much since the early chance but was well in the game and United had not had control of the midfield despite Gibbs White’s work rate looking toothless again up top.

The Blades tried to use Robinson’s long throw but once he threw one out and another was easily headed away. The first half petered out and United knew they would have to up the tempo in the second half to get the vital three points.

Cardiff made two changes at the break as they continued to experiment with personnel. McGuinness and Vaulks replaced Drameh and Ralls.

Immediately after the break, it was clear to see that the Blades showed a greater urgency, and Gibbs White nearly linked with Berge before the opening goal came. Patient football saw the ball played from Osborn onto Basham and then Gibbs White. The on-loan midfielder steadied himself before sending over a great cross and NDIAYE was able to power his header up and into the roof of the net as Phillips could not react. It was a big moment in a tight and relatively game and United’s players and fans knew this by the scale of the celebrations.

United had a good spell after this with Gibbs White prominent throughout and a few balls just came across the box evading an incoming player before Stevens took too long when in a good position. McGuiness and Ng were both booked for cynical fouls and Norwood the same as Ndiaye gave the ball away and City broke. United had moved it around better and was looking for the killer pass or moment that would surely seal the game?

Colwill came on for Watters at 66 minutes and then United made their first change at 70 minutes. Sharp replaced Ndiaye as both the youngster and Stevens went down but the full-back was able to continue. The skipper got a great reception as he came onto the field, after signing a new contract and having a spell on the sidelines previously.

Cardiff had not threatened too much but with only a goal in the Blades knew they could not relax. Vaulks long throw was headed on by McGuiness and Foderingham had to claw away with Hugill in close attendance. Sharp then had appeals for a penalty waved away after he turned in the box. United did start to sit back for a period and a few nervy moments meant the crowd was still concerned. Sharp did well twice to hold it up and then United had chances but made poor decisions on the break.

The game ticked over 90 minutes but there were 5 minutes to play somehow despite there not being many stoppages. The Blades broke in the first minute of this and Gibbs White intelligently rolled Berge in but the side foot finish hit the base of the post and bounced away. United had to stay solid and won a few headers before Sharp’s experience again helped see out the final moments and the three points were in the bag.