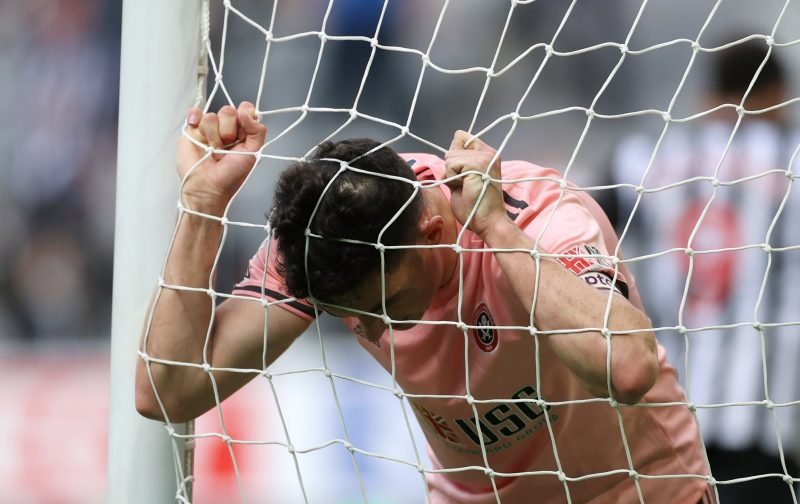 With supporters in attendance at St James Park, Newcastle was able to send their home fans away happy with a comfortable victory over the relegated Blades. After such an improved performance at the weekend, hopes were high that United could build on this as hopes turned to the new managerial appointment and next season. Sadly, the performance the visitors served up was reminiscent of much of the dross that they have displayed for most of the campaign. The Blades were timid on and off the ball with all the flair and creativity on display, coming from the home side.

Joe Willock scored just before halftime with a headed finish after good work Saint Maximim and Murphy in the lead-up. Newcastle had dominated the game and opportunities. In the second half, Newcastle had further chances before United at least were able to have more possession but other than a McGoldrick effort off the top of the bar, never really looked like mounting a comeback in a drab contest. 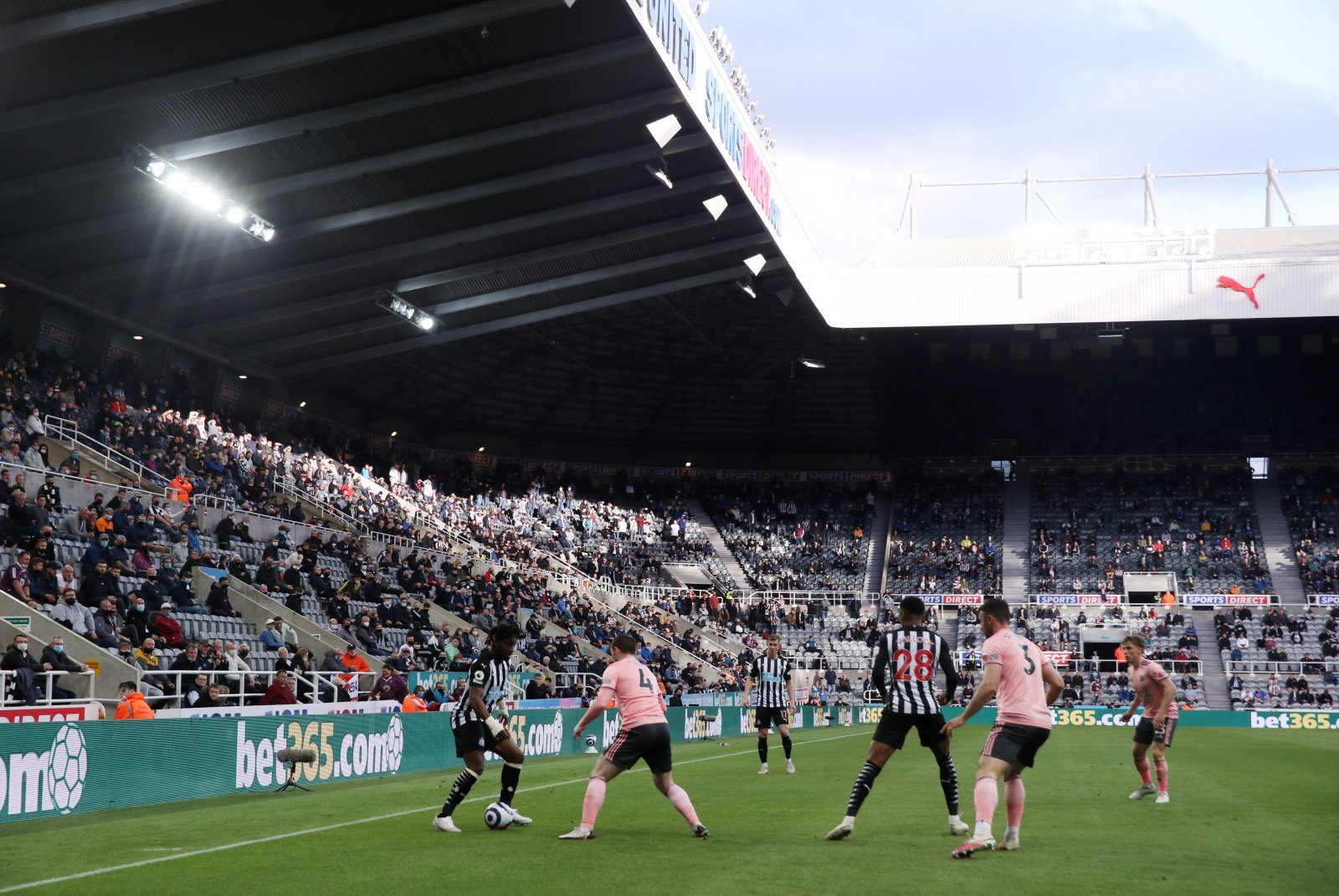 The Blades made one change from the side that won at Goodison Park with Jayden Bogle in for injured George Baldock. Goal scoring hero of the weekend, Jebbison, started again with Boyes and Seriki adding to the youthful nature of the substitutes bench.

The home side was unchanged with Arsenal loanee Joe Willock looking to score in 5 consecutive games and seemed to be matching up the Blades in a 3-5-2 formation with Ritchie and Murphy in the wing-back positions.

Newcastle started on the front foot and won a corner before Almiron had the first shot on target with an effort at Ramsdale that was comfortable.

Saint Maximin went on a meandering run skipping away from Basham and Stevens before United held him up. The Blades had struggled to put much together so far and a wayward McGoldrick pass saw Newcastle back on the attack but Egan was able to clear.

Despite the home side looking the livelier side buoyed by the returning fans, a great chance came for the Blades when Jebbison, Osborn and Stevens worked space in a great move and McGoldrick was in but his deliberate side-foot finish went the wrong side of the post. He should have at least hit the target and probably should have scored.

Another good move saw great interchange with Osborn at the heart of things and Bogle’s cross was overhit. Another ball came in and McGoldrick fired over when well placed. It had been a good response from the Blades with several good pieces of play and openings.

Newcastle came back and after two Norwood giveaways under no pressure, the home side got up the field and had men over as Joelinton had his effort blocked as the Blades defence pack pedalled.

The next phase of the game saw little action in either goalmouth but Newcastle settled down after the Blades decent spell and Norwood cynically chopped down Willock giving Newcastle a free kick 30 yards out. The effort was blocked from the Blades wall.

The best effort of the game came just before the half-hour as Newcastle worked an opening and Ritchie was allowed to send over a cross unchallenged. Shelvey met the header with no one tracking his run. The save from Ramsdale was fantastic as he sprang to his right to keep it out. He seemed to strain himself in making the save but carried on after treatment. Newcastle won two corners in quick succession and Fernandez won a header that Ramsdale made the save but was still not comfortable seemingly in some pain.

Saint Maximim got forward and made a surging run as he got away from Basham and the Stevens who chopped him down right on the edge of the box leading to an inevitable yellow card. Ritchie took it but it was a long way off target.

Egan was the next to try and stop a Newcastle player by illegal means as Joelinton was grabbed but Dummet’s header was wide. Egan then seemed to pull Almiron down but the referee felt the Newcastle man went down too easily.

Joelinton had to have some treatment but Newcastle was back on the attack with Willock showing his skill to get away from Fleck and then the same man having a curled effort blocked after Saint Maximim worked space again.

Murphy sent over a cross and Joelinton got away from Egan who wrongly tried to play him onside. The offside trap did work a moment later when the ball through sent Saint Maximim though and he slid Willock in whose shot low down was superbly saved from Ramsdale again. Robinson completed the clearance.

Newcastle continued to probe and had more opportunities with United’s players not seeming to want to tackle or engage at all. There was so much space all around the midfield and final third and there were gaps all over with the pace and power of the Newcastle players causing problems. The half ticked into 5 minutes of stoppage time but it seemed inevitable the home side would get a goal their dominance deserved.

United could not get out and Robinson’s clearance was awful leading to Saint Maximim getting on the ball and wriggling away before a lovely slide-rule ball to Murphy. No United player was close to him and the cross came in unopposed. WILLOCK met it with barely a token challenge from Bogle and headed home past Ramsdale giving him no chance. Half time came not long after and the home side deserved the late goal for their attacking play and penetration. The Blades had done little of note outside of the first 5-10 minutes when they had a few good chances but had regressed badly and been completely second best.

Dwight Gayle replaced Joelinton who had been struggling first half. Saint Maximim superb skills teased Stevens and Fleck before his no-look pullback found Almiron whose shot was well off target. Norwood was wasteful again with a cross to no one in particular. United tried to keep it but ended up just passing it backwards and out before Saint Maximim blazed over as no one got close to him at all again.

Some decent play from United saw McGoldrick and Basham combine and they won a free-kick right on the edge of the box after Shelvey tripped Basham. McGoldrick hit it but it was a long way wide with his effort. 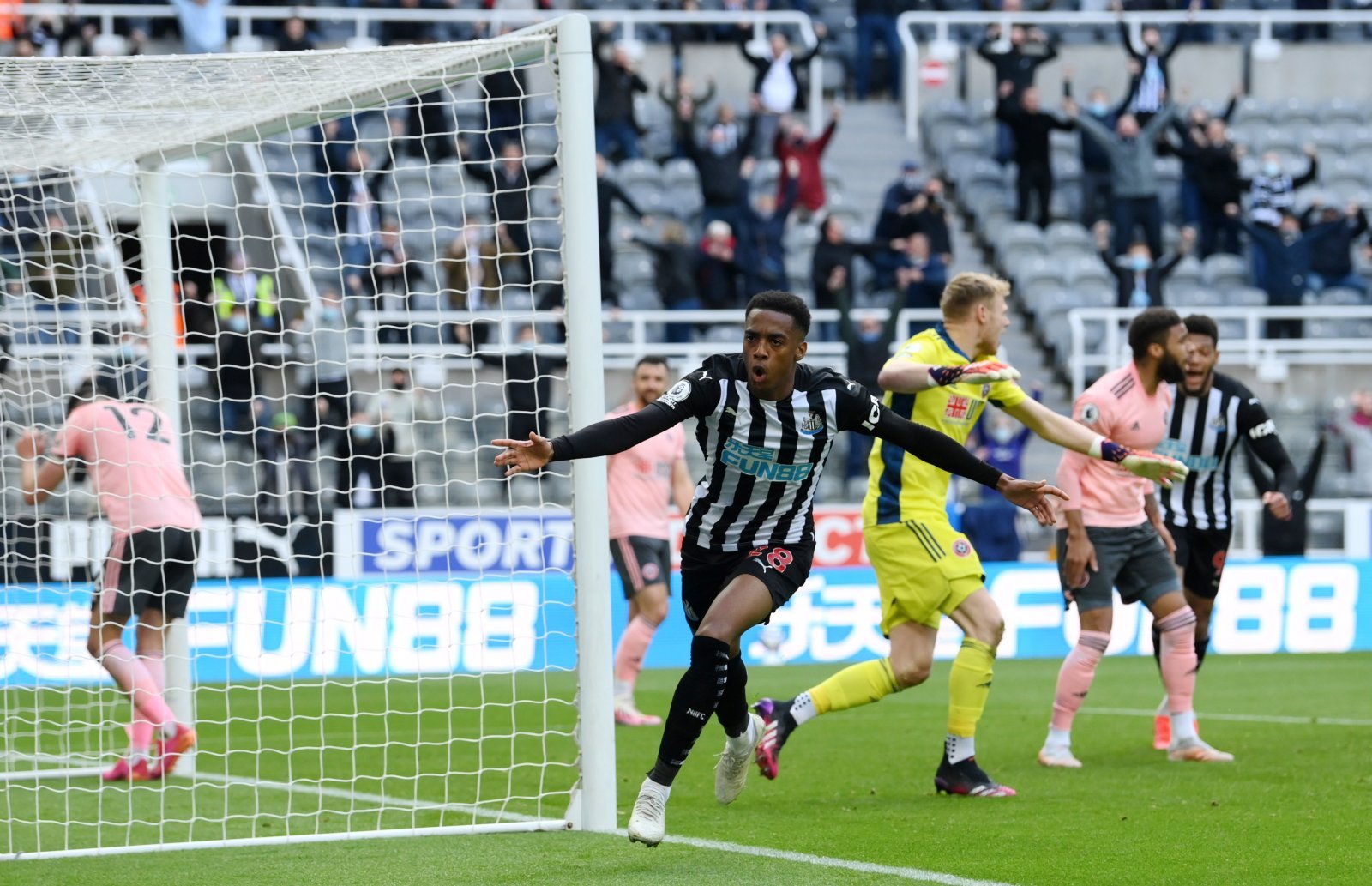 Saint Maximim continued to terrify the Blades and he got away from Egan with pace and strength and Ramsdale had to save United again as the cross-shot came over.

Basham’s sloppy play nearly saw the home side in again but Fleck intercepted before Norwood then gave it away and Newcastle broke again but for once Saint Maximim made a poor choice. United could not get going and Jebbison was looking increasingly isolated in the game. Newcastle continued to ask the questions with Gayle nearly getting in on another chance where there were big spaces in the Blades backline.

United’s players were not taking any responsibility at all and no one was trying to penetrate or play a forward ball. It was safe and easy for Newcastle who waited patiently for the turnover and then was onto the attack.

Brewster came on for Osborn on 66 minutes as the Blades tried to find something as McGoldrick dropped deeper. He managed to get a shot away that was deflected wide. Egan’s headed effort was the first time the Blades had to make the keeper work and this was a simple catch. The Blades were relieved to see the back of Saint Maximim who hurt when he slipped. Sean Longstaff came on to replace the dangerman.

Newcastle then broke again and was away down the left but as the ball came in from Willock, it was cleared at full stretch with players converging in to convert. Bogle at least got United out for a period and won a free-kick but Newcastle was back on the attack quickly. Willock ran away from Basham and opted to take a shot but it was straight at Ramsdale.

United then had their best effort of the game as McGoldrick made it with a jinking run and tried a long-range shot that beat Dubravka but it glanced off the top of the bar and over. It was a really good effort.

After this United had a good spell of possession, they managed to somehow go backwards after several minutes of sideways and backwards pass with no crosses or penetration at all. United seemed pretty clueless about how to create anything of note but at least had a spell of possession.

Carroll came on for Willock as he was unable to continue as a few players went down injured. Dubravka had to have a spell of treatment but like Ramsdale was able to carry on. United tried to find space down the right but Bogle’s final ball was poor and Basham could not find any space. Egan went upfront for a period and Newcastle nearly broke with United having so many men forward.

The game went into 5 minutes of stoppage time and McGoldrick tried to move forward for a chance but the striker probably went the wrong way but the ball was played back to Norwood but his woeful finish summed up his diabolical showing and United’s lack of intent.

Dubravka needed more treatment before United brought on Femi Seriki for Bogle for a glimpse of Premier League life but there was a little incident of note other than Ramsdale trying to dribble around Gayle. A late free-kick for United after McGoldrick’s run was whipped over but a foul was given before the ball looped up onto the top of the bar. The final whistle came after more treatment for a Newcastle man in an awful contest.