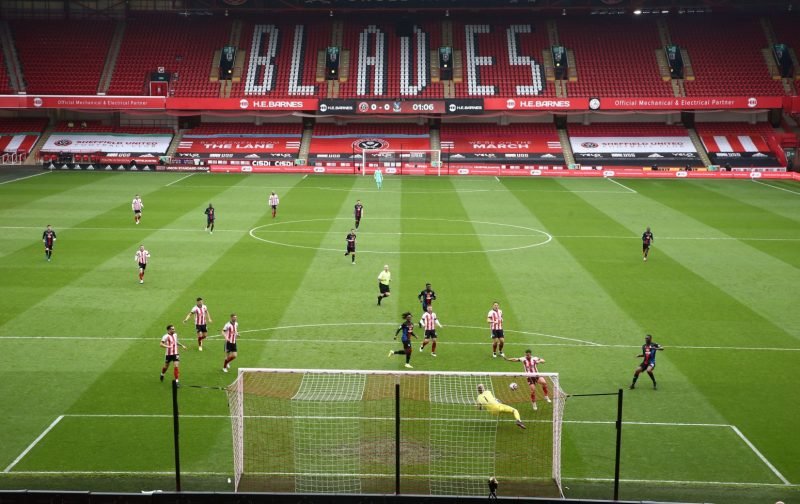 As the season meanders to a depressing end, the Blades completed their penultimate home game of the season at a saturated Bramall Lane. Crystal Palace was in town for a game that hopefully will see the last time that the ground will be empty after 14 months without spectators. Once again the Blades were second best and now have lost 28 games this season and are just one game away from having the joint-most in Premier League history. At 17 goals they are still 3 away from equalling Derby’s record for the fewest goals. Palace scored right at the start and close to the end. In between, they dominated the game and chances and the Blades just looked a sorry mess as they were not able to have a single effort on the opposition goal in another performance that was simply not good enough.

United started with Sander Berge making a start for the first time since just before Xmas after sustaining a serious injury against Manchester United. Kean Bryan was also back in after his partner gave birth a few days ago. Oli Burke also came back in. The outgoing players were Ben Osborn, Jayden Bogle and Rhian Brewster. 17-year-old striker Daniel Jebbison was given a place on the bench after impressing for the Academy and u23’s this season.

Palace made two changes from the side beaten by Manchester City last time out with Jeffrey Schlupp and Gary Cahill coming in for Scott Dann and Jairo Riedewald. Wilfried Zaha started alongside Christian Benteke. Roy Hodgson’s men knew they needed one win to keep themselves mathematically safe.

The game was only a minute old when Palace was ahead. United’s soft touch in midfield saw Eze almost walkthrough and the midfielder then drifted past a static Egan and played it across. The ball went through Baldock’s legs and found BENTEKE. The striker hit a shot that Ramsdale would probably have saved but the ball hit Baldock and deflected up and into the net. 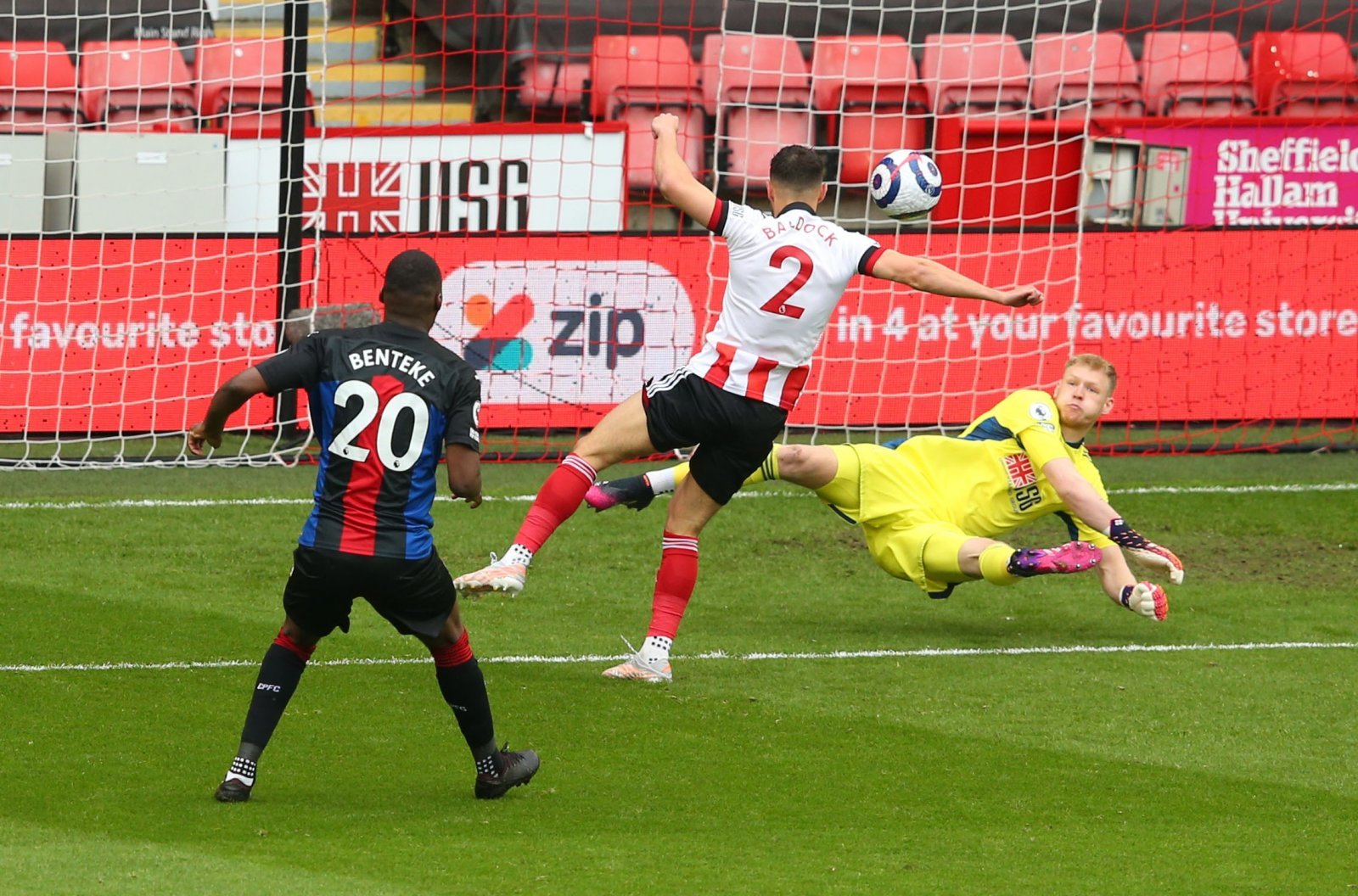 The bad start from United continued as they gave it away time after time and Palace were dominating. Eze continued to look a threat and Palace won two corners. United looked abject and a rare break saw Basham get down the right but it came to nothing.

Palace again went through the soft United midfield and Benteke had a chance but he hooked it at Ramsdale despite being given an age to pull it down and line it up.

Stevens did get a decent cross in but it was difficult for McGoldrick to divert it anywhere near goal as he was leaning back to get his head on it. Palace won a corner after a deflection wide and the ball stayed in the Blades area before Milijvojevic hit an effort that a Palace player flicked goalwards but Ramsdale did well to gather.

United had a bit of the ball down the right with Baldock doing well but his cross was headed nowhere near Burke as the Palace keeper continued to have nothing to do.

Bryan put in a meaty challenge but got the ball and then Ward did likewise on Fleck and was yellow carded. Norwood’s delivery was awful as it went miles high and wide from the free-kick. Norwood and then Bryan gave it away before Fleck was the next to waste a set piece hitting the first man in a corner.

Palace then had a flurry of chances to finish the game as Schlupp got away from Basham easily and sent a delightful cross over and Bryan lost Benteke completely and his header was saved superbly by Ramsdale as he went down to his right.

Eze then outfoxed Baldock with some lovely skill and worked a chance but shot wide when well placed before Zaha then came inside the hapless Basham but his shot was blocked by Egan. United was hanging on grimly and it was all Palace with no opportunities created or at the Palace keeper who had been completely unemployed as half time came.

The second half started with a better spell at least in terms of united having a few moments with Berge coming inside and Mitchell dangling a leg but the Norwegian stayed on his feet when if he had gone down it would have been a spot-kick you would think.

United won a corner but as the ball dropped to Egan, it was sliced wide. It was a good chance.

Berge then chopped his man down as Palace broke before a cross from the right saw Basham do well to head over his bar. From the resultant corner, the away side had a chance as Ramsdale did not gather but was fouled. Palace then had a good chance on 55 minutes as Fleck dithered yet again and Benteke robbed him and shot goalwards at the near post but Ramsdale touched it onto the post. It was another good chance for Palace to finish the game.

Osborn came on for Berge before Palace broke from another giveaway after McGoldrick went down desperately looking for a penalty and Eze fed Benteke but Bryan blocked well. United was trying to find something but it was now a game where Palace just had control and still looked the more likely with Eze and Zaha looking dangerous on the break. Zaha was crowded out before United made a change with young Jebbison coming on for Burke. United won a corner but as it dropped Basham sliced badly wide.

The game moved into the final 20 minutes and united had still not tested Guaita with two sliced efforts wide from defenders the sum of their efforts. Osborn then sent over a cross after good work from Baldock but Jebbison on the stretch headed well over.

Zaha was still causing issues and got away on the break but he was crowded out before Townsend had a shot narrowly wide. Palace was still the most threatening side by a long way and Zaha then came inside and turned away from two men before the ball came across and Ayew seemed set to score but hit Stevens and it went behind.

United players were flailing about halfway with two hitting the deck as Zaha ran away again but he could not find the final moment. Lundstram came on for Bryan but United were still not looking threatening at all. Norwood’s ball through was too hard for McGoldrick before Ramsdale had to bail out his side again as Ayew shot was pushed away.

Jebbison showed some nice skill with a drag back and won a free-kick. Norwood’s effort was decent but just over but at least had the Palace keeper worried. 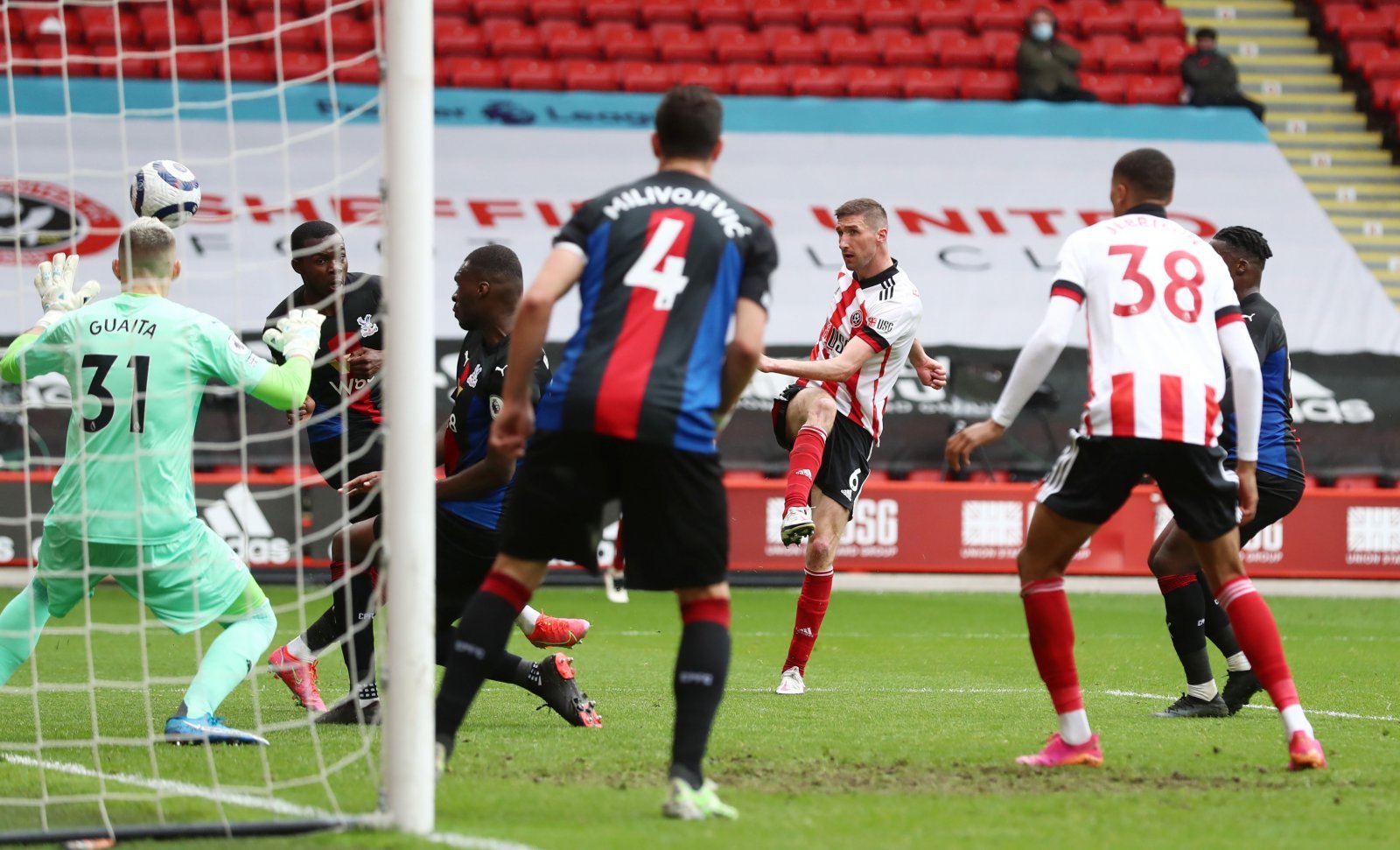 Palace won another corner before Benteke and Zaha worked space again and United could not hold up their pace and running power as the defence was constantly at full stretch.

On 88 minutes the game which had probably been over since minute one was properly confirmed. Lundstram was completely embarrassed by Eze with a sublime piece of skill and the sub for the Blades made a hopeless attempt to get back before EZE ran away. The midfielder cut inside and beat several men, sitting at least two on the deck before hitting a shot that hit Fleck and deflected beyond Ramsdale.

There were three minutes stoppage time and although Baldock kept probing United created nothing of note and once again had failed to have a single shot on target in another thoroughly appalling display.

One Reply to “Palace Bestow Dreary Defeat On Blades”