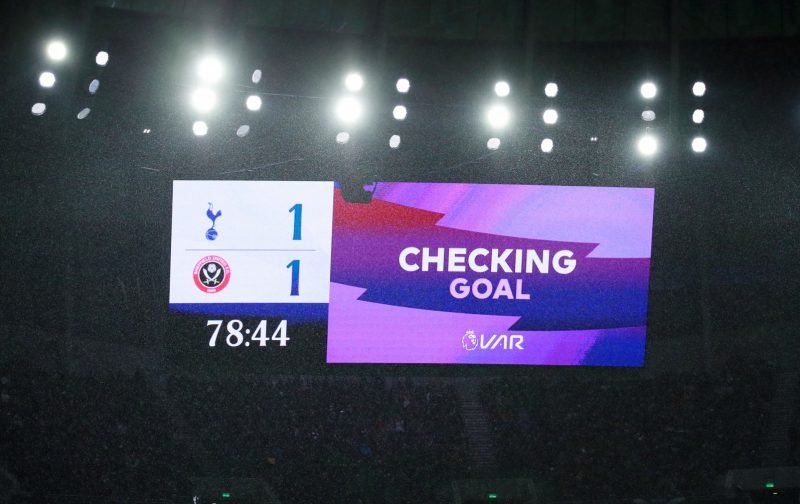 The 2019/20 Premier League season is just a dozen games into the new season. This season has seen the introduction of Video Assisted Referee (aka VAR), and whilst its introduction was designed to make the game easier for the referee, for the supporter, it has caused nothing but controversy.

Video Assisted Referee (VAR) is controlled by a neutral panel of qualified adjudicators who watch the game live on television screens, (not necessarily in the stadium), and report back to the on field referee and report back any infringements made in a lead up to a goal when scored. Alternatively, the referee can also ask VAR to look at any other decisions such as possible penalty, when an alleged foul is committed in the box.

Last Saturday, Sheffield United, with the score locked in Tottenham Hotspur’s favour (1-0), the Blades scored an equaliser through David McGoldrick’s first goal of the season, and cancelling out Son’s opener in the process – or so they thought as the Irish International wheeled away in celebration in front of the travelling supporters. The referee had stopped play and took VAR just over three minutes to decide that in the build up, John Lundstram’s big toe was offside. Furthermore, he was next to the Assistant Referee when the ball was played to him, and no offside flag was waved.

Not true. No one would have blinked an eye. https://t.co/Wu9TpvAvGQ

This isn’t the first time that the Blades have been denied a goal this season due to VAR. On 14 September, Oli McBurnie was denied an opening goal for offside before Southampton netted the winner.

I don’t believe that supporters can complain that certain teams are being targeted after Liverpool were denied a goal in their match at Aston Villa, and second game into the season, Manchester City were also denied a last gasp winner in their 2-2 drawn match with Tottenham.

But if an article published on the BBC Sports website is anything to go by, there may be hope that the correct decisions may be given, but may take longer time for the referee to make that decision. Referee’s chief Mike Riley has informed Premier League referee’s that they should revert to the pitch side TV in order to make a final decision. It is believed that referee’s have opted not to use this in order to eliminate any further delays in the game.

In the German Bundesliga, VAR officials take just one minute to make a decision, and if they take longer than 60 seconds, they give the original decision regardless, in order to prevent further delays in the match.

Many supporters, including myself, would like to see VAR disappear from the game, but we fear that it is here to stay and that we should look at ways of making it work, and the German way might be the best way forward to getting the right results!