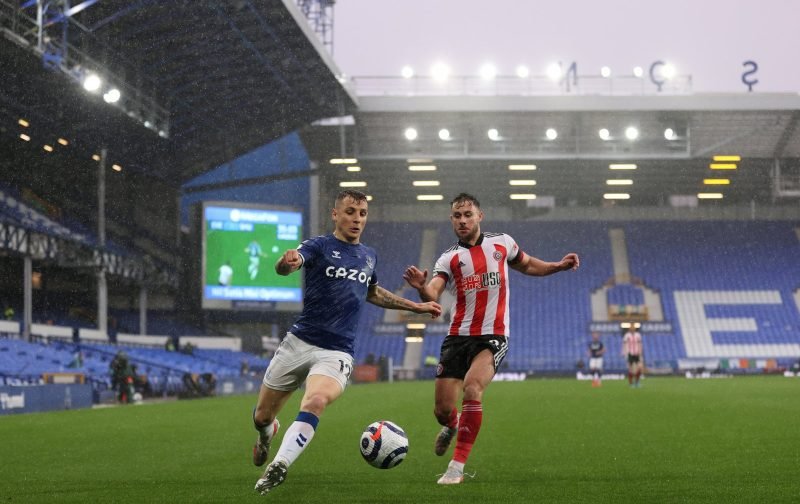 The Blades turned in one of their best performances of the season as they shocked the home side Everton with a 1-0 victory severely damaging the European chasing hopes of the Toffeemen. United were excellent from start to finish and deserved the three points given to them by the youngster Daniel Jebbison’s early strike.

United still without a manager and missing more players through injury put up a remarkable performance against the odds in a rain sodden Goodison Park. Not one player performed badly and the Blades showed determination and skill to win for only the second time on the road.

The Blades gave a start to young Jebbison with the 17-year-old being preferred to record signing Rhian Brewster in attack. Kean Bryan dropped to the bench with Jack Robinson coming back for a rare start after a long time out with injury. The latest missing through injury was Oliver Burke and Sander Berge with both unlikely to feature again this season. There was no place in the squad for Lys Mousett but both Brunt and Gordon were on the bench.

Digne put over an early deep cross which United cleared before Jebbison let Holgate know he was there as he put in an early marker. Everton spent more time on the ball in the early proceedings with Everton’s midfielders moving across the field and making United work.

United took the lead though with their first attack on 7 minutes. The ball was played to the left and Robinson did superbly to jink inside Godfrey, dropping his shoulder and finding space with a driving run. His cross was perfect for JEBBISON who on the move was able to meet it to turn it into the net. His first full start and a goal for the youngster! He was the youngster Premier League player to score on his first start.

Calvert Lewin then tried to respond with a shot that was deflected wide off Egan. From the corner, Allan hit it with the outside of his foot and Ramsdale made a great save springing to his left to push it away. He then took the resultant corner despite the difficult conditions.

United then came again in an open game but Osborn could not quite find Baldock. The rain continued unabated but United were giving things a real go and it had been decent 15 opening minutes from them. Norwood switched a lovely ball before the ball was recycled inside and Osborn found McGoldrick hit a curling effort a long way off target.

Everton tried to get in but Egan was able to make a sliding tackle to deny any chance of an effort before Basham cleared a chipped effort. Everton had a chance when Digne’s cross split Robinson and Egan but Calvert Lewin’s header was straight at Ramsdale.

Basham caught Richarlison as United were at least getting closer to opponents than they had for a number of games. Appeals for a penalty were waved away as the ball struck his hand but in a natural position so no chance of any award. 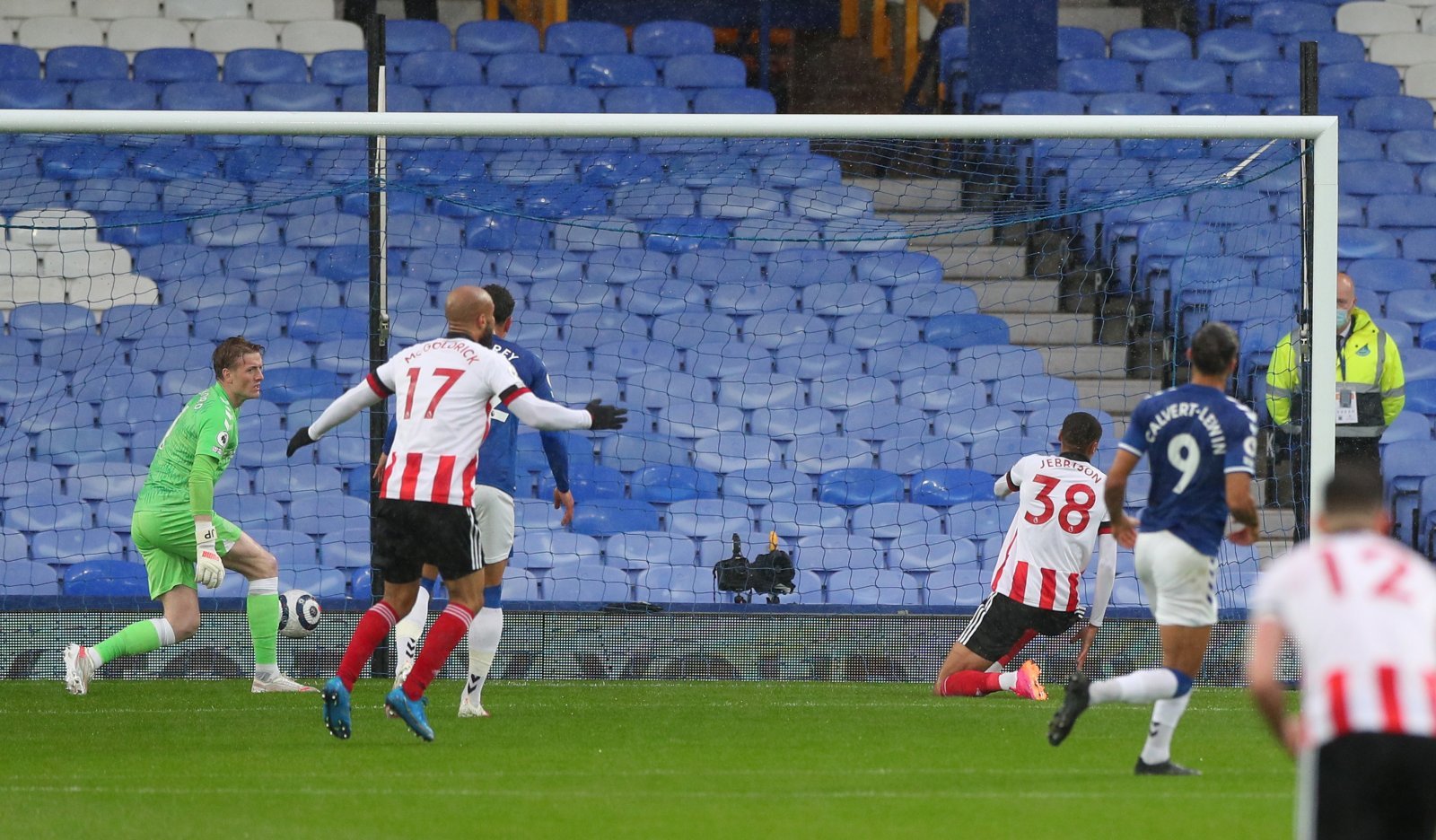 United the nearly got in again with good work from Osborn down the left but Jebbison could not quite get on the end of it. Basham was then booked for going in dangerously on Digne under treacherous conditions. Digne sprinted back on soon after despite seemingly being in seemingly in some pain!

Good work from McGoldrick and Jebbison saw them exchange passes and McGoldrick’s shot was blocked but Fleck’s effort was hit firmly and Pickford had to make a save pushing it out. The corner was cleared and Everton were able to build some momentum following this but Basham and Egan both stood firm.

United nearly made it 2-0 when a bad back pass from Holgate saw Jebbison use his pace to intercept and was in on goal and one on one and chance for more glory but his chipped effort was saved from Pickford as he raced out. The rebound fell to Osborn and he managed to retrieve the ball and Jebbison turned but saw his second effort blocked. Everton had been all over the place at the back and the youngster probably should have doubled his and United’s lead.

Fleck then made a good interception but Osborn dithered when United had men over. The performance from the Blades had been like night and day from much of what we had seen this season.

Everton finally had an opening and Rodriguez who found too much space but Basham made a great block to deflect it over the bar. Norwood sliced the corner over his own bar leading to another on the other side but he cleared again. Jebbison then won a free kick on half way in a really promising game for the youngster.

Everton should have levelled when a cross from the right from Rodriguez saw Richarlison completely get away from Egan and headed goalward but Ramsdale made a super low save. The rebound seemed set to be converted by Calvert Lewin but somehow Ramsdale made a superb point blank save although probably knew little about it! A superb double save though.

McGoldrick then showed some delightful skill down the left to come away from two Everton players as the confidence of the Blades players seemed to belie their position. However, right on half-time Everton should have levelled when a ball over the top saw Basham sleeping and Richarlison was in but somehow badly skewed his first-time volley and it went well over. The half time whistle came soon after this. United had competed, had opportunities and it had been a far better performance than for the majority of the season but still had to be indebted to Ramsdale for a string of fine saves.

Everton made a change with Sigurdsson on for Holgate and Everton changed their formation in an attempt to get back in the game. Everton won an early corner but Ramsdale made a good catch. Calvert Lewin threatened to get in but Egan came across with a really good block as he looked to get his shot away.

A great run from Basham saw Allan bring him down as he ran all the way down the right flank but Fleck’s cross was a waste from the free kick. Everton had a spell of play but did not really threaten and Baldock did well to intercept. United had a chance after Fleck was fouled. Norwood’s free kick was sent over and Egan headed over. Maybe should have done better on this chance.

Basham was felled clumsily from Rodriguez who was booked for the challenge. Fleck took it from wide on the right and Egan headed across but Calvert Lewin did well to defend with McGoldrick threatening to finish the header back.

Everton then had a spell of play and Richarlison had an effort that Ramsdale saved at this near post. They then nearly found another opening as the ball ricocheted around. Godfrey fizzed a shot wide as the home side tried to find some sustained pressure. 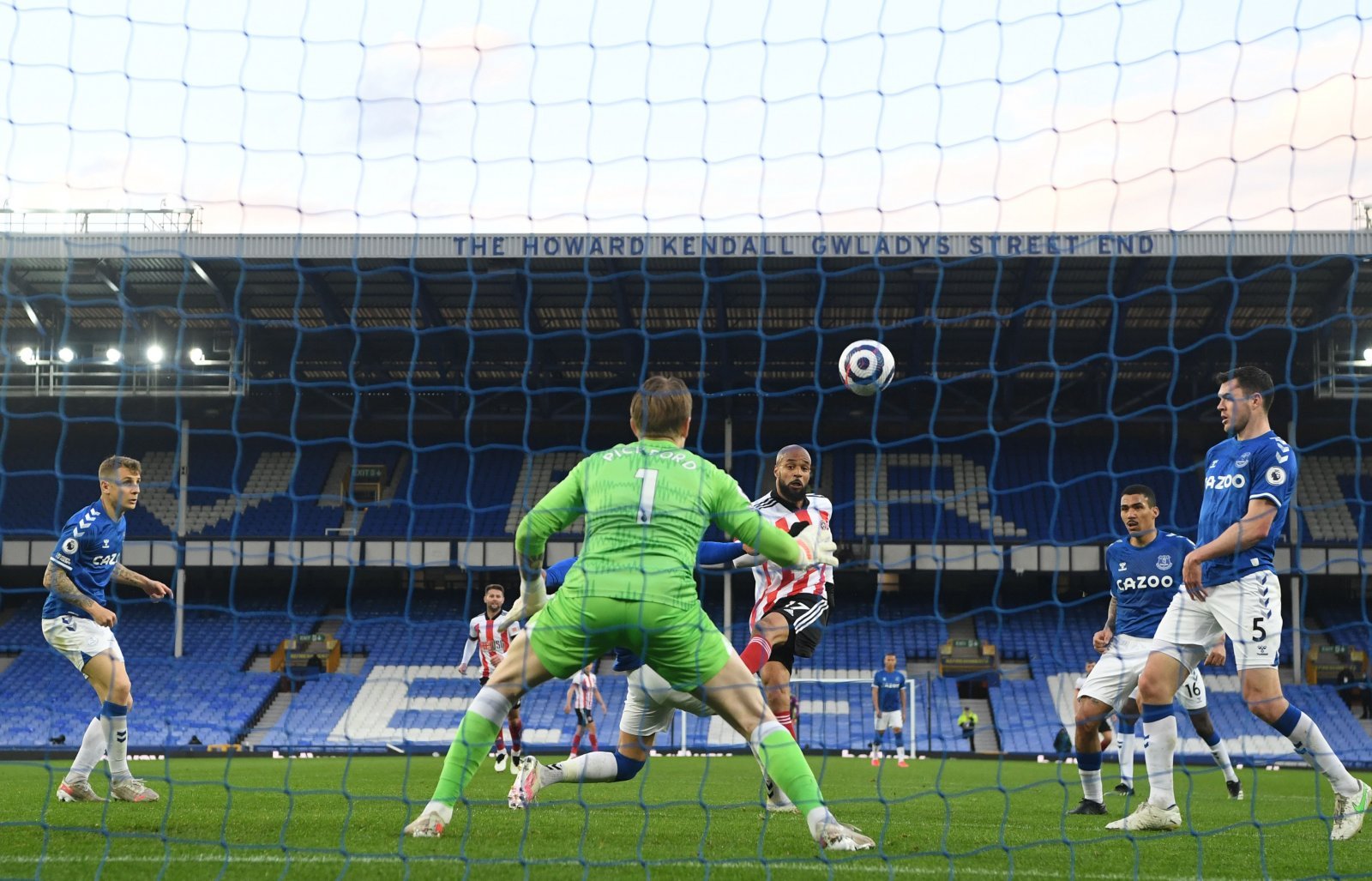 United then won a corner and got out for a period before they then had a good chance when Stevens got down the left and put a good cross over but as McGoldrick turned and hit it goalward but the ball was deflected over. The corner saw Egan cause issues again and peeled off and headed off an Everton player and Pickford was fortunate to get a foul given for him as the ball dropped.

Bernard and Gomes came on for Doucoure and Rodriguez in Everton’s final changes. More great work from McGoldrick saw him find Jebbison who ran down the wing and won a corner. Osborn’s shot was wayward as the ball dropped.

Baldock was booked for dissent after a needless foul when United had men back. The free kick on the angle saw Digne sent it over but Basham headed away twice. McGoldrick then headed away as United continued to keep firm. Everton then had a chance as the ball came over from Coleman but Baldock was brave to head away and Bernard ran it out of play.

The game entered the final 5 minutes of the game but McGoldrick twice was superb with a block and tackle. Everton struggled to make much headway at all and United were defending superbly. Robinson was booked for taking too long over a throw in before Egan blocked another chance as Everton won a corner as the game entered three minutes stoppage time. The corner came in but Godfrey headed over. That was effectively it and the final whistle came soon after to confirm the excellent win for the Blades and only their 2nd on the road all season.