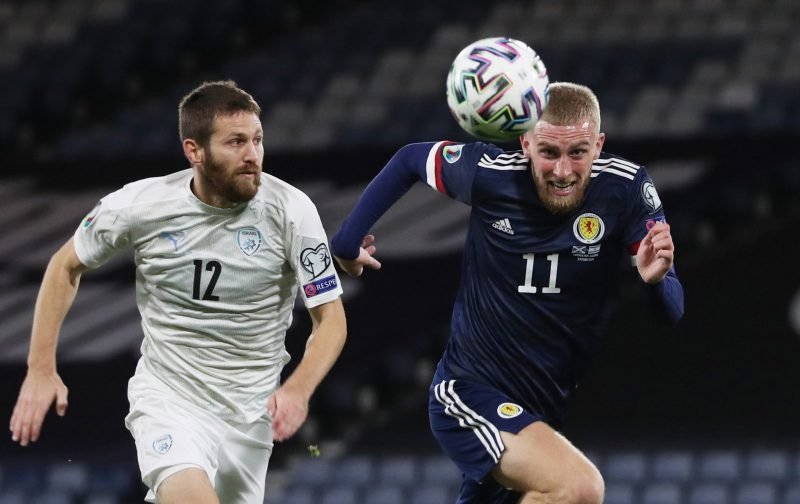 Life might be tough for Sheffield United and its players, but not for ten of its squad members who have all been called up for their respective countries at various senior levels.

Scotland has recalled duo Oli McBurnie and John Fleck to the Tartan Army for three World Cup Qualifiers later this month, as they aim to qualify for their first World Cup competition since France ’98. The 2022 FIFA World Cup will be held in Qatar.

Steve Clarke’s side will face Austria at Hampden Park on 25th March before travelling to Isreal three days later. They return to Glasgow at the end of the month to host the Faroe Islands. They have also called up former Blades striker Che Adams, and Sheffield Wednesday defender Liam Palmer.

Enda Stevens, along with former Blade Callum Robinson (now at West Brom), has been called up to the Republic of Ireland squad to face Serbia, and Luxemburg in qualifying matches before facing Qatar in a friendly in Debrecen, Hungary.

Enda Stevens has been called up to the Ireland squad for their upcoming games.

Keeper Aaron Ramsdale and striker Rhian Brewster have also been called up to the England U21 squad for the U21 Euros, which will be joint-hosted by Hungary and Slovenia respectively. The Three Lions will face Group D matches against Switzerland, Portugal, and Croatia between 25th-31st March, all to be played in Slovenia. Should Aidy Boothroyd’s side qualify for the knockout stages they will return to the competition between 31st May to 6th June, to complete the competition.

Midfielder Sander Berge, who has had a long lay-off through injury, has also been called up to represent Norway when they face Gibraltar and Montenegro away from home. They also host Turkey on 27th March but due to Covid restrictions will play the match in Malaga, Spain.

Meanwhile, a trio of the Blades Academy starlets has also been called up at the international level. Striker Daniel Jebbison, who scored in the recent 5-0 thrashing of Birmingham City U23’s, and Antwoine Hackford, have both been called up to represent England Under-18’s.

Ryan Viggars has also been called up to the Wales U-18’s squad and will face England at Cardiff’s municipal Leckwith Stadium on Monday, 29th March.

“This international recognition is testament to the fantastic work going on right through the Academy, from a passionate and talented group of staff. It is an exciting time for the club as there is some brilliant talent progressing through various age groups.”