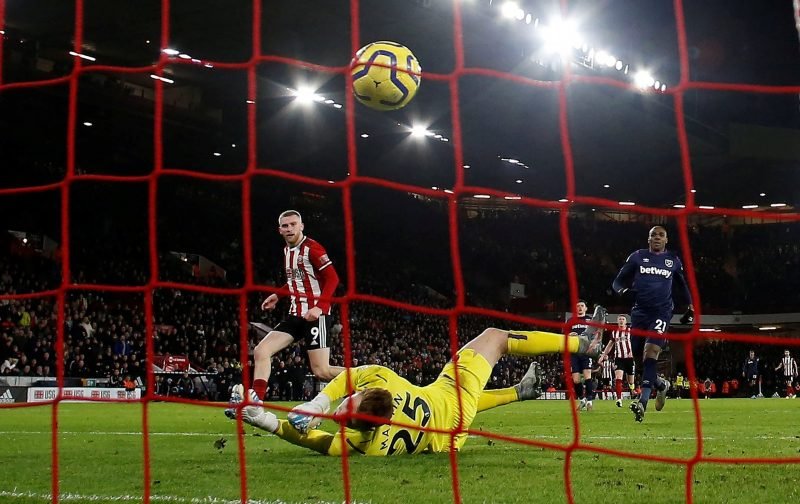 Sheffield United got back to winning ways after they saw off relegation-threatened West Ham at the Lane thanks to Oli McBurnie’s second-half strike. There was late drama as Robert Snodgrass’ goal was ruled out due to handball against Declan Rice in the build-up after everyone thought the injury-time goal had denied the Blades all three points. It was a huge win for United in a game that was far from a classic and one that saw the visitors maybe shade the first half but the Blades certainly the more dominant force in the second half.

Big games under the lights at the Lane are always special nights and Wilder, fresh from having signed a new contract, opted to tweak things with McBurnie in for Mousset. With Moore and Verrips not fit, Jake Eastwood had been recalled and was on the bench after being recalled from Scunthorpe. There was no place on the bench for Man of the Match from the FA Cup game, Luke Freeman.

The game began with few chances of note and was mired in a midfield battle. Rice and Noble looked to get on the ball with Fleck and Norwood trying to do likewise for the Blades. United won an early corner but Fabianski punched clear. Egan then had a headed chance from another corner but was high on his effort. The Hammers did see a lot of the ball and were neat and tidy after they forced United to cough it up a few times but they had not created much themselves despite pushing United back.

On 14 minutes, the visitors had a blow as Fabianski went down injured and was in real trouble with potentially a re occurrence of the hip injury that had kept him out much of the season. He had to go off and was replaced by Martin. The first effort came when Haller outfoxed Basham but was well off target. United then had a chance but Lundstram’s effort was blocked. United had struggled to get their football going though and it had become a scrappy contest. Anderson was looking to get on the ball and cause problems with his pace and trickery but he missed a good chance on the half-hour. Egan failed to clear and the ball ran on but the winger shot badly wide when he should have scored.

West Ham continued to look the better side in terms of possession and winning ball and territory but did not work Henderson. Manager Wilder would have been glad to see the half time whistle come so he could talk to his troops.

United began the second half in hungrier mode. They started to win tackles and move up the field quicker. Basham and Baldock were more involved and Fleck started to cause problems. The midfielder was close to breaking the deadlock when Baldock centred and the ball fell to him but his first shot was blocked and then his second effort was just wide with Martin out of the mix.

United were well on top now and McBurnie who had worked hard all game headed over a Norwood cross. Basham then linked well with Baldock and United were well ensconced in Hammers territory.

On 53 minutes, United made the breakthrough. It came from an error from the sub keeper Martin, whose pass out was wide of the centre back Balbuena, and Fleck read it and nipped in. He rounded the defender and then squared for MCBURNIE who side-footed home under the body of the keeper. The finish was not the most convincing but they all count!

Mousset came on for McGoldrick and was immediately involved with two powerful runs forcing West Ham back. United continued to attack and a good move saw Stevens and Mousset combine before Lundstram was in but he opted to pass rather than shoot and Baldock was just blocked off at the last moment from Cresswell.

Snodgrass came on for Masuaku and Besic replaced Lundstram with 20 minutes to go. Nemesis of the Blades, Snodgrass showed his quality from a free-kick and the ball was in the net but Haller was in a clear offside position.

West Ham had a chance to get back in the game from a set play. The first was a free-kick when Henderson did well to get down to save from Lanzini and then react to gather before Haller could react.

Going the other way, Mousset fired over after beating Cresswell showing his quick feet and skill but the game was still in the balance and Egan slipped under no pressure, seeing Lanzini in on the angle but Henderson stood up well to save.

Fornals was the next change for West Ham for Lanzini whilst Sharp replaced the goalscorer McBurnie with just over 5 minutes to play.

Besic took one for the team hauling down Anderson to rightly get the first booking off the game but Haller headed over the free-kick as Snodgrass whipped another one in.

The game went into three minutes of stoppage time but there was still time for late drama. West Ham attacked and Rice broke through and slipped in Snodgrass who shot home via Henderson and a post to spark wild celebrations in the away end and David Moyes ran down the touchline. There seemed the usual checks but there seemed nothing amiss but then the screen showed a check for handball. It took an age again but the decision unbelievably went for United! The goal was overruled and it was the home fans who now went berserk! The final moments saw United play out the time and spark wild celebrations at full time as the Blades went up to 5th place, at least temporarily. The United players came to the Kop with McBurnie and Fleck being interviewed by Gary Neville amidst the din of the crowd!