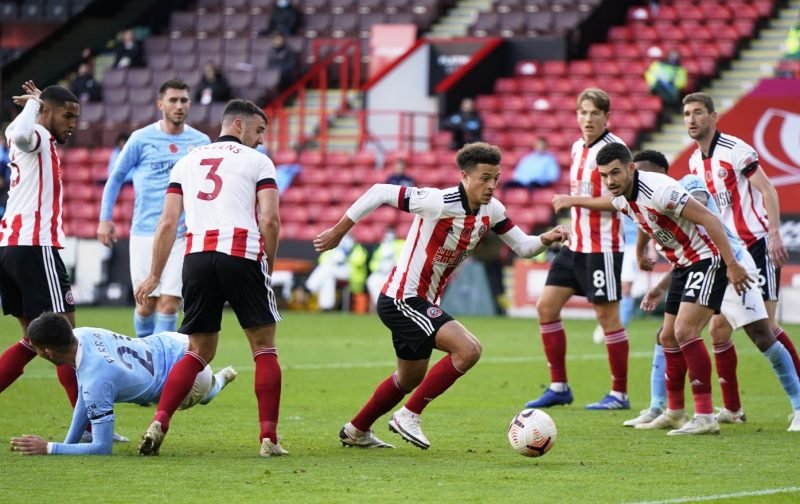 It may seem rather harsh considering there last game was against the current Premier League Champions Liverpool in a slender 2-1 defeat but the fact remains that Chris Wilder’s side has now gone seven games without a victory in the league this season. The single point came three games ago to relegation rivals Fulham.

Whilst games against Liverpool, Manchester City, and next week’s opposition Chelsea (at Stamford Bridge) are usually seen as ‘dead rubber’ games. Fixtures which the pundits expect to gain zero points from, it is beginning to becoming somewhat concerning owing to the lack of points on the table.

That said, United once again put up a spirited performance despite a narrow loss. These performances are great to see and read about but United need to start putting the ball in the back of the net where it matters.

Chris Wilder opted to field almost the same side which lost at Anfield with only one noticeable change as the fit-again Max Lowe replaced contract rebel John Lundstram who dropped to the bench.

One change for the Bladesmen. 🔁

Max Lowe returns after missing the trip to Anfield with concussion, replacing John Lundstram who drops to the bench. pic.twitter.com/WBwcl8HF79

As expected, it was the visitors, shooting towards the Kop end, who had the better of the early exchanges whilst they held 65% possession for the entire match. United had a nervy start the previous week at Liverpool and almost gave away two goals inside the first five minutes. Against the Citizens, the Blades held firm with eight minutes on the clock gone by before City had their first attempt on goal as Torres connected with Cancelo’s cross with Ramsdale keeping out his header before Ethan Ampadu blocked Raheem Sterling’s follow up effort.

United continued to make life difficult for Pep Guardiola’s side despite the visitors enjoying the majority of the play, the Blades back-line were still standing firm. John Egan was alert to cut-out Sterling’s run, conceding a corner in the process which Laporte hit wide at the far post.

Lowe seized on a misplaced pass as United went forward on a rare occasion but nothing came of the move. Egan then made a good challenge to divert De Bruyne’s intended pass to Sterling back to Ramsdale. The keeper was called into action when he tipped over Rodri’s dipping effort.

On 23 minutes the stopper produced his best save of the match to keep out Torres from close range following Sterling’s low cross before Mahrez fired over the top.

The city found their breakthrough on the half-hour mark when De Bruyne found WALKER on the edge of the area. His low drive evaded Ramsdale and flew into the bottom corner and was followed by a muted celebration on his 100th Premier League appearance for City.

United won two corners in quick succession ten minutes before the break. Basham almost headed home on the first from Berge’s delivery, with Walker deflected his goal-bound effort wide. Brewster then failed to connect cleanly with a header, again from the Norwegian’s delivery.

At the other end, a breakaway saw Stevens swiftly retreating to make a crucial block to deny Torres.

The second half saw United began with a positive attitude despite behind, whilst the visitors remained dangerous in attack. Torres was again denied by Ramsdale, but the assistant-referee waved an offside flag after the save was made. City then came close to extending their lead as Walker burst free onto the byline and his cut-back to De Bruyne saw the Belgian fire across the box and wide of goal.

Ramsdale again was called into action on the hour mark after he kept out Mahrez low drive from a free-kick after Stevens had conceded the foul following his tussle with De Bruyne. United managed to get forward but a combination of Walker and Rodri helped clear the lines from Burge’s looping cross.

On 65 minutes, United made their second change with Oliver Norwood replacing Ampadu. The hosts created a chance with City having luck on their side as Dias sliced his clearance into the hands of Ederson after Berge had got the better of Cancelo. The Blades then created their best opportunity of the match. Again, Berge was instrumental in the build-up, powering down the right flank and again beating Cancelo, with Lundstram firing his effort over the top.

Rhian Brewster got himself into a good position in the box but was denied firstly by keeper Ederson before the assistant-referee waved an off-side flag. The Blues then carved out two more opportunities through De Bruyne and Sterling, though both Egan and Ramsdale kept out the danger.

On 81 minutes David McGoldrick replaced Lowe as Wilder added extra metal in the attack. Again Ramsdale was forced to earn his money when he kept out Silva before he headed clear after Sterling looking to profit from Ederson’s long clearance.

There were three minutes of stoppage time added at the end of 90 minutes but despite committing numbers forward, United couldn’t find that penetrating ball in the final third.