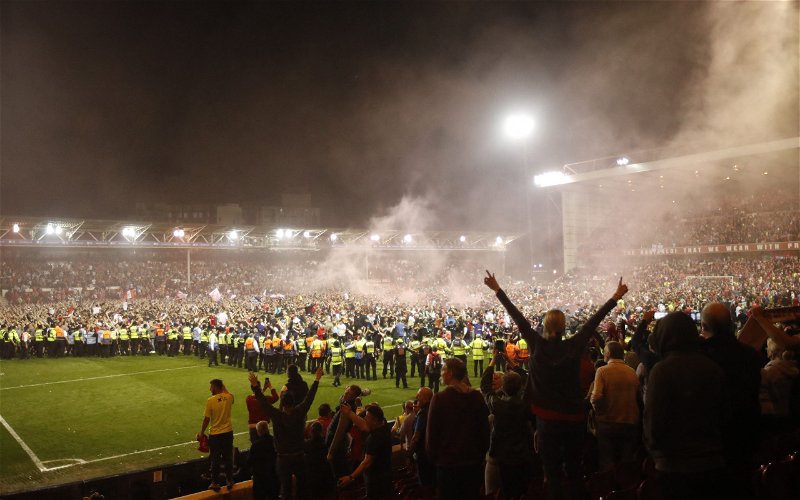 Sheffield United’s season ended at the City Ground tonight as Nottingham Forest advanced to face Huddersfield Town at Wembley a week on Sunday for a place in the Premier League. United recovered from a poor first leg defeat and going a further goal behind to Johnson again to mount a remarkable second-half comeback to turn the tie around. Gibbs White and Fleck scored the goals after excellent work from Berge and Baldock respectively. United then looked the more likely for spells and Forest looked shell-shocked but the game went into extra time. It went back and forth after this and either side could have won it with Ndiaye’s late chance seeing Samba deny him again – as he did earlier in the game. The game then went to penalties and for United they could never recover from missing their first two as Samba was the hero saving three out of five penalties taken from United. Forest go into the Wembley final but the Blades can be proud of their efforts and will rue a poor first leg performance. They showed tonight they could cause Forest a whole manner of problems and in the end could easily have gone through, after such a poor showing at the Lane, United tonight were the far better side in a role reversal of the previous game.

Heckingbottom made two changes from the first leg with Stevens out injured and Osborn also dropping out. In came Baldock and Norrington Davies in the wing back positions. There was still no place for skipper Sharp in the side or on the bench. Forest named an unchanged side from the victory at Bramall Lane. 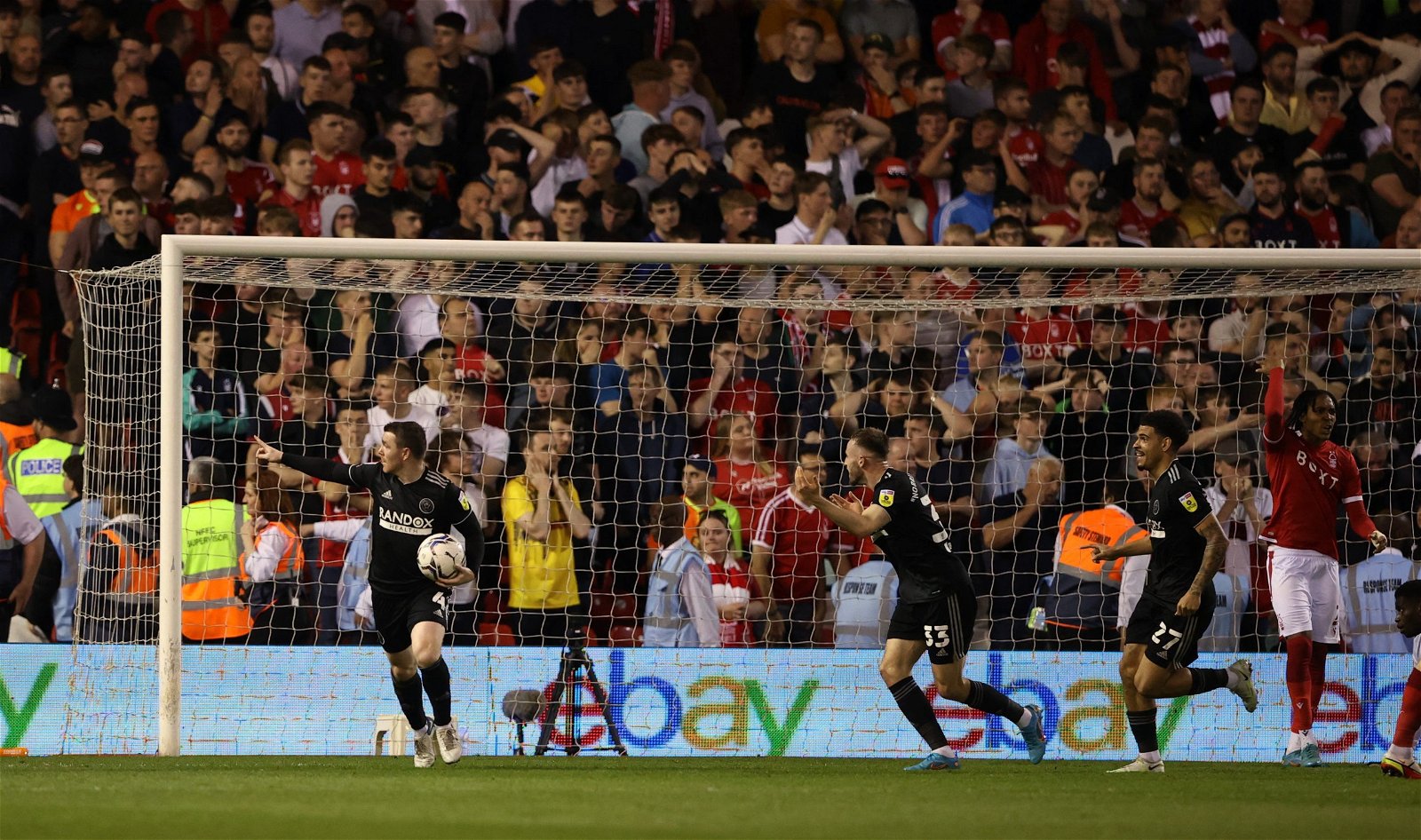 The Blades started well and got stuck in with Berge and Norrington Davies committed before Robinson hurled a long throw in that was cleared away. United were the dominant force and seemed determined to force Forest back and get closer to the opposition. They won another long throw and this one saw Egan unmarked power it not far wide in the first chance.

However, soon after the Blades had a golden chance to lead when Gibbs White played in Ndiaye who beat the offside trap but he hit it early and Samba’s outstretched arm pushed the ball away. It was a big save and a big opportunity missed.

Forest had not been in the game but Fleck nicked the ball off Johnson leading to a corner that United dealt with. The Blades were moving it about confidently and the Forest fans were getting frustrated but as they did on Saturday, they scored with their first break. It was the same type of move that led to the chances at the Lane as the ball was played down the channel and Surridge ran off Basham and was down the side. He sent over the cross to the completely unmarked JOHNSON who once again finished well but the defending was appalling with Basham and then Robinson not tracking their men. A simple break and cross led to another easily converted goal.

Forest fans celebrated Surridge had a break and was blocked before Garner had an opportunity that was curled wide and United had to stay in the game.

The next spell was poor as the sting was taken out of the game before Ndiaye came onto a ball and curled a ball straight at the keeper. A few niggly moments with Johnson going to ground under minimal contact twice frustrated United as did the time Spence was taking over throws but Heckingbottom was foolish to thrust the ball into his chest and this led to a melee with even McBurnie getting involved with his cast on!

Forest had a break down the left but Johnson’s ball was poor and overhit before Norrington Davies had to be alert to cut out danger down the left. Norwood tried a long ranger that whizzed not too far over before the half time whistle went and United knew they had a mountain to climb. They had performed better than Saturday but out of the two big chances, Forest had taken theirs and United missed theirs.

The second half saw the Blades come flying out of the blocks and within two minutes they were level on the night. Ndiaye got in initially but the ball was not cleared and Berge sent over the cross and GIBBS WHITE was able to poke the ball home and the Blades fans had new hope!

After this United won a corner and Robinson got a header across but it hit Ndiaye before United won two more consecutive corners and the comeback was most certainly on. Forest seemed shell shocked and the Blades penned the home side back. Norwood nearly played in Baldock before Ndiaye and Gibbs White nearly linked up again.

Robinson was booked for a late foul on Johnson but this was a brief foray into the Blades half as the momentum was all with the team in black. United continued to move the ball forward and Gibbs White was again driving forward and causing problems for a worried Forest rear-guard.

The game did go quiet for a spell around the hour mark but Forest did win a corner and had half-hearted appeals for a penalty for a handball on Basham when it clearly hit his midriff. Lolley came on for Zinckernagel and Davis for Surridge but the Blades took the lead and levelled it on aggregate on 75 minutes. Ndiaye was caught as he turned his man and the ball round the corner but the advantage was played and Baldock was in down the right. The wing-back came inside but went back down the outside outfoxing Colback before sending over a driven cross that FLECK diverted home from close range. The turnaround was complete and the Blades fans behind the goal were going ballistic!

United sensed they had Forest on the racks and Gibbs White then nearly fed Ndiaye before McKenna’s back pass was terrible and had Samba worried as it went out for a corner.

Davis’ pace and power caused problems for United and he saw off Basham and Norwood before his cross was sliced wide by Norrington Davies before Egan miskicked leading to a chance for Davis again but United got a block in. Gibbs White then whipped in a cross that saw Ndiaye shin the ball over when well placed – whether he would have been flagged offside was debatable.

It was end-to-end stuff with United trying to attack and then Forest and with fatigue now clearly a factor. At the death Garner had a shot deflected wide before the corner was cleared and the full-time whistle went.

The first period of extra time saw Ndiaye break the offside trap but his shot was hit at the keeper at the near post before Johnson worked some space and found a cross that Davis poked towards goal but Foderingham gathered in a rare save for the keeper. Baldock then won a corner but Robinson could not quite angle his header.

Forest won a free-kick that was cleared before Ndiaye sent a dangerous ball in that Samba claimed. Gibbs White took a knock right on halftime, in extra time, but was able to carry on.

The second period of extra rime began with a Robinson error and Johnson sat a Blades player down before finding Lolley who made a mess of the shot and it squirmed into Foderingham’s hands. United made changes for the first time in the game as Osborn came on for Baldock and then Hourihane for Fleck. Cook then brought down Gibbs White for a yellow card before Berge had a shot deflected wide. With 7 minutes to go, United had the big chance as Gibbs White flicked the header on and Ndiaye was in but his shot from close range was once again smothered from Samba. It was a great chance to win the tie.

Forest came out of this and Lolley had a shot that drifted wide before Hourihane’s cross was just away from Gibbs White. Forest then came again and Davis’ power was once again a bit threat as he slalomed through the field but was finally crowded out. The additional two minutes was played out and the contest was to be decided on penalties.

After United won the toss and decided to go first, Norwood went forward very early as the ref was still talking to the keepers and after a long delay, added to be Samba’s gamesmanship, Norwood’s first kick was well struck but too close to the keeper and saved. Johnson scored sending Foderingham the wrong way. Hourihane was next up but opted to go down the middle and Samba deflected it up and onto the bar and away. Cafu hit his kick hard but Foderingham got a hand on it but it went into the net. Forest were 2 up after 2 each and almost there. Berge took the next and scored easily before Lolley then blazed awful kick miles over the bar and United were back in it but Gibbs White still had to score and his effort after a delayed run up was poor and Samba saved easily.

Forest were through 3-2 on penalties. The Blades had given it a really good go but ultimately came up short after a superb effort in the second leg. The fans swarmed onto the pitch to celebrate (with a disgraceful assault on Billy Sharp by one fan sadly) and Forest could look forward to a date against Huddersfield a week on Sunday for a place in the Premier League. For the Blades they have to regroup and look to go again next season.