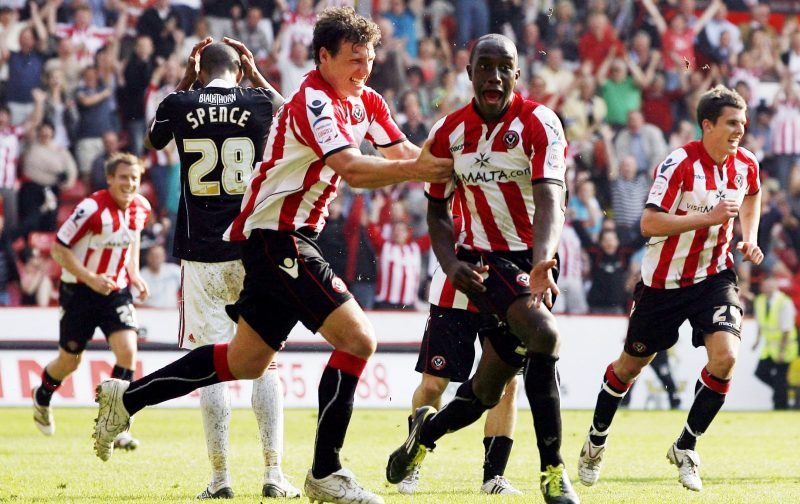 Relegation from the Championship looked almost certain in April 2011after five straight defeat but a surprise victory over Bristol City at Bramall Lane gave the Blades a reprieve and hope that survival was a real possibility.

United snatch victory which gave Micky Adams side hope of avoiding a relegation slide. The story goes, as we know, United would claim points in their next two games as they beat Reading 3-2 but a 2-2 draw at home to Barnsley in the South Yorkshire Derby, and results elsewhere condemned the Blades to life in League One (which would last six seasons), with their final day 4-0 defeat at Swansea meaningless.

Sheffield United’s teenage striker Jordan Slew slammed home a superb late winner to keep alive his side’s faint hopes of clinging on to their Npower Championship status as they beat Bristol City 3-2. Slew, 18, fired his first senior goal on his debut at Preston last week and followed up with a fine winner at Bramall Lane to lift the rock-bottom Blades to within six points of safety with three games remaining. City striker Brett Pitman scored directly from a corner in the ninth minute thanks to Blades goalkeeper Steve Simonsen’s clanger before Lee Williamson and David McAllister – with a fine strike on his full debut – gave the home side a half-time lead. 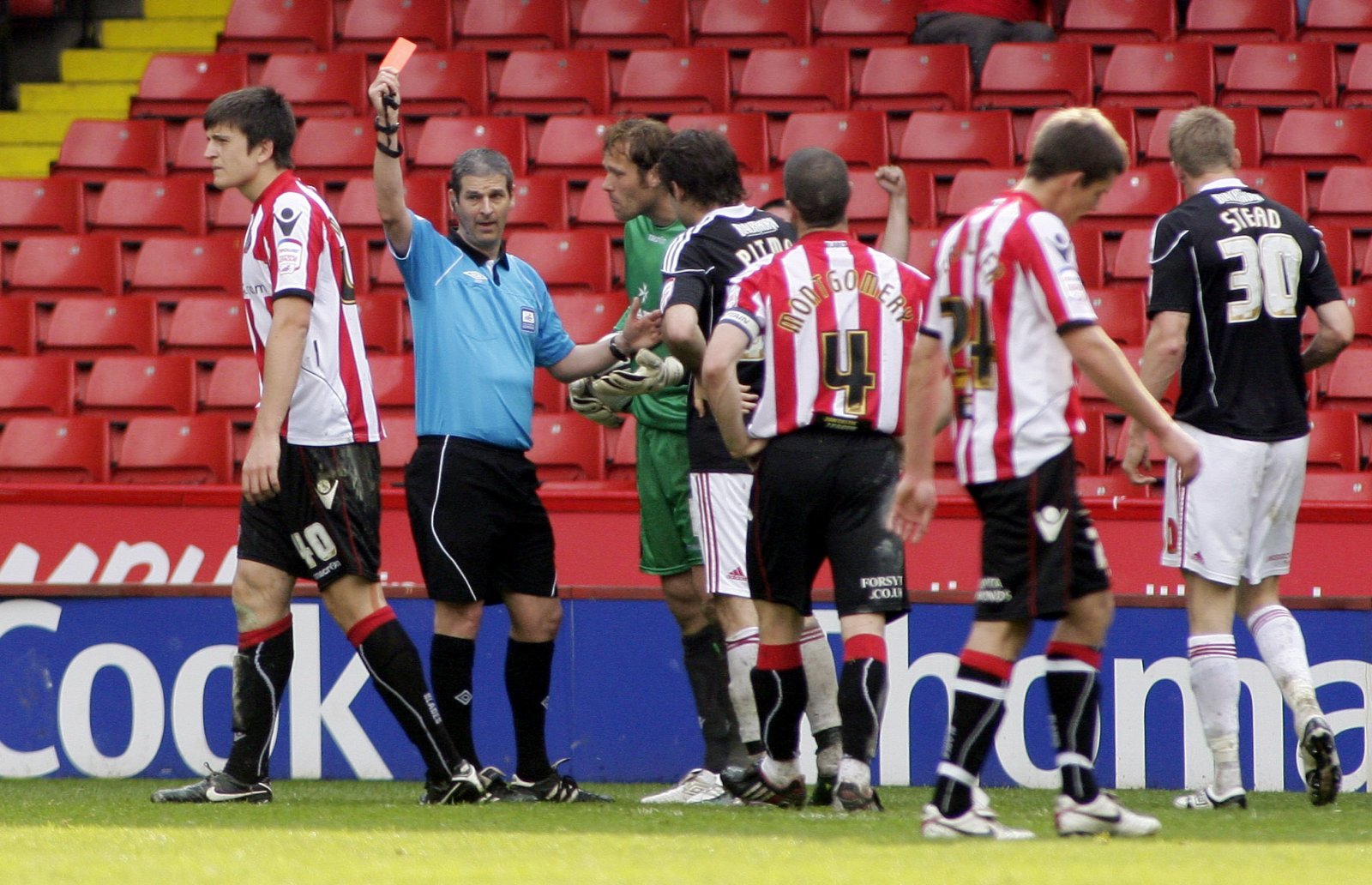 OFF: Harry Maguire is shown the red card

Pitman struck an equaliser from the penalty spot in the 60th minute, but Slew struck to help extend the Blades’ battle for safety. Both sides ended the game with 10 men as first City striker Nicky Maynard and then teenage Blades defender Harry Maguire were shown straight red cards. The Blades began full of purpose but were undone by Simonsen’s howler in the ninth minute. The Blades goalkeeper had turned away Maynard’s fierce shot for a corner and when Pitman delivered a right-footed in-swinger to the far post, Simonsen flapped at the ball and contrived to deflect it over the goal line.

Conditions became increasingly difficult as the first half progressed due to a prolonged torrential downpour, but still the Blades, somewhat laboriously, pressed. Williamson’s low shot fizzed past City goalkeeper David James’ right-hand post and then the game turned on its head in the space of three minutes just before the break. United deservedly equalised in the 40th minute, bizarrely. The ball pinball around the City penalty area and visiting defender Jamie McAllister’s attempted clearance rebounded off Williamson and into the net.

Two minutes later the visitors were reduced to 10 men, Maynard’s scything, two-footed tackle prompting a straight red card from referee Andy D’Urso. And a minute later David McAllister rifled home a brilliant first-time shot from the edge of the penalty area into the top corner following Lewin Nyatanga’s miskick. David McAllister then curled another fine effort towards the same corner, only this time James turned the ball away at full stretch. City’s 10 men were almost back on level terms in the 52nd minute when Pitman’s 25-yard free-kick came back off the post.

The Blades were reduced to 10 men themselves in the 59th minute. Home midfielder Nick Montgomery’s short back pass was pounced on by City substitute and former Blade Jon Stead. Stead was brought down inside the penalty area by Maguire and after D’Urso showed the youngster a straight red card, Pitman placed the subsequent spot-kick into Simonsen’s bottom left-hand corner. 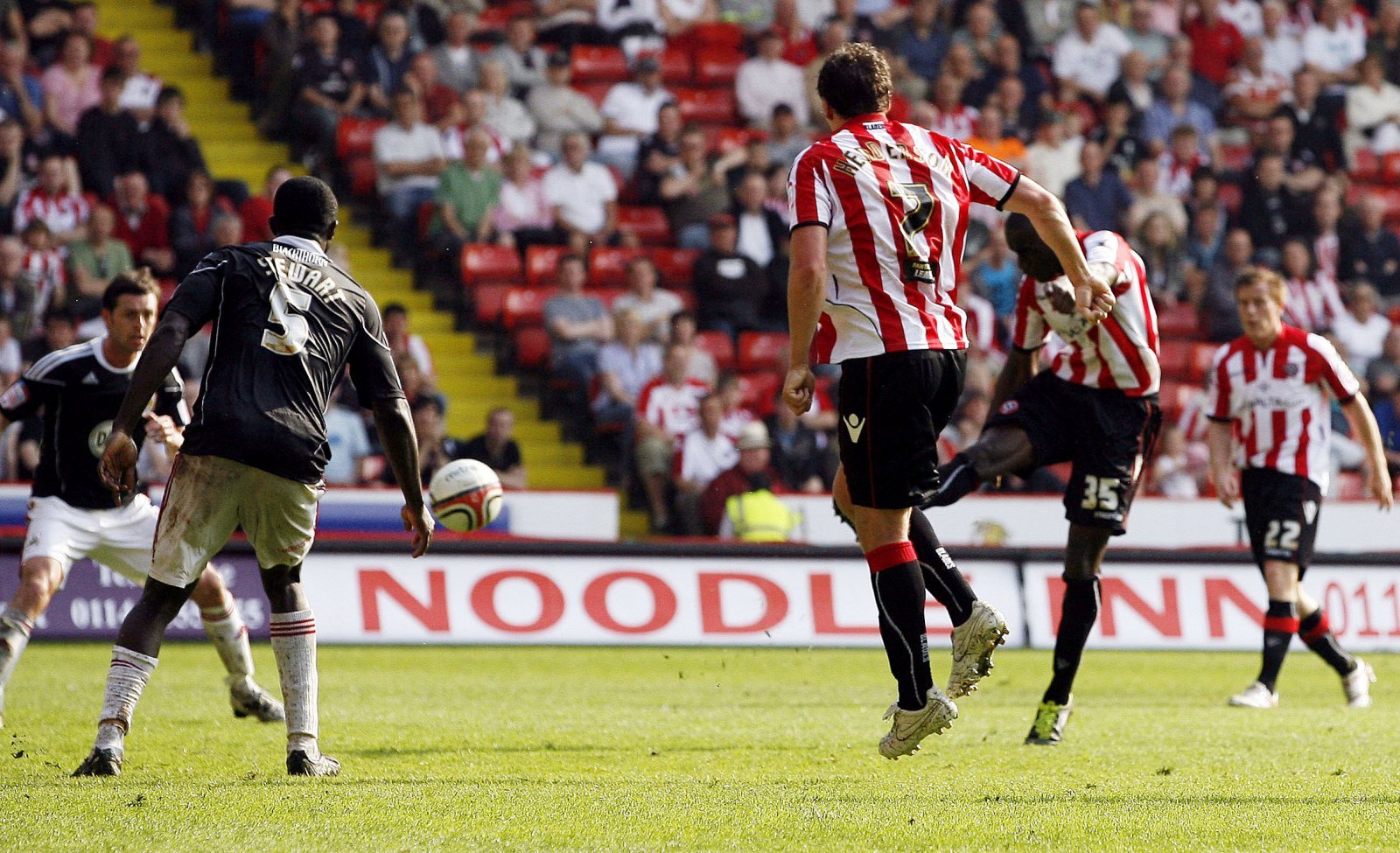 Stead was superbly denied by Simonsen with 15 minutes left and Adams replaced Stephen Quinn with Bjorn Helge Riise soon after to chants of ‘You don’t know what you’re doing’. But with four minutes left Henderson’s knockdown from Matthew Lowton’s cross was rifled home from 12 yards by Slew to hand Adams his third win in 20 league games as Blades boss.