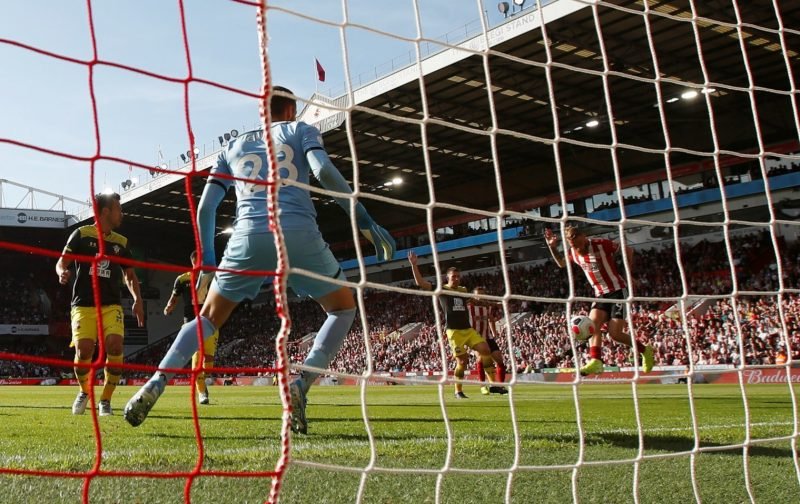 The Blades suffered back to back home defeats (only the second time in their Premier League history) as they lost by a single goal to Southampton at Bramall Lane. It was a game where decisions went against United with a goal ruled out for offside on the VAR system and club captain Billy Sharp sent off for a late tackle at the end of the game to compound a bad day.

United did have chances in the game but also gave opportunities away in an end to end contest. It could have gone either way but the away side was ruthless to score an excellent individual goal after an error and then United missed opportunities at the death to take home a point.

United made changes with Fleck and McGoldrick in for Freeman and Robinson. Southampton started the game without Nathan Redmond but former Blade Che Adams started.

The game began with the visitors seeing more of the ball and they forced an early corner but they did not create much other than a tame header Henderson fielded. United came out and won a corner of their own but this came to nothing. The game was quite even but the away side were looking more controlled with the ball and Romeu was key to many of their moves.

From a swift attack, the ball fell for Adams who hit a crunching shot that hit the post. United cleared and moments later had an even better chance as McBurnie played in McGoldrick but one on one he hit Gunn when he should have scored. Fleck had two chances with a header wide and then an angled shot off target before Hojberg shot wide at the other end. United had struggled to keep the ball and the Saints then went down the right and the deep cross was headed down and seemingly goalwards by Adams but Henderson made a great save with the ball possibly coming off the post as he saved. It was a real let-off for United.

The next spell saw United keep it better but they could not create any clear chances despite Norwood’s superb diagonal balls nearly putting Baldock in twice. The half time whistle came after O’Connell headed over from a corner.

United needed to play higher up the field and did this in the second half with McGoldrick coming deeper and linking well with Fleck twice. Vestergaard smashed into Baldock and United had a free-kick. Norwood put it over, Egan seemed to miss it or just help it on and McBurnie put the ball in. The goal was given but eventually, after a delay, the VAR system adjudged that McBurnie was offside and for the first time this season a significant moment went against the Blades with the new system.

After this United lost their shape somewhat and Adams shot at Henderson and Boufal went on a run before shooting over. Sharp came on for McBurnie but only moments later the deadlock was broken. Norwood telegraphed a ball to Lundstram and DJENPO seized on it and broke away. Norwood and O’Connell tried to bring him down but he went past both of them and the final man Egan before slotting expertly in the corner. A great goal but really poor defending from the initial pass and the inability to stop the player either by fair or legal means.

Fleck shot wide as United tried to get back in the game but Mousset came on for Lundstram. He instantly got involved having a shot blocked for a corner before Fleck had a great chance blocked and then Gunn saved from McGoldrick. Robinson then came on for Basham as United really went for it. Sharp chased down a Southampton player but his tackle was late and high and he was given a straight red by Mason. This disrupted United and Southampton controlled the final stages. Six minutes of stoppage time were put up and even though Henderson went forward on two set plays, United did not create a further chance and slipped to the disappointing loss.