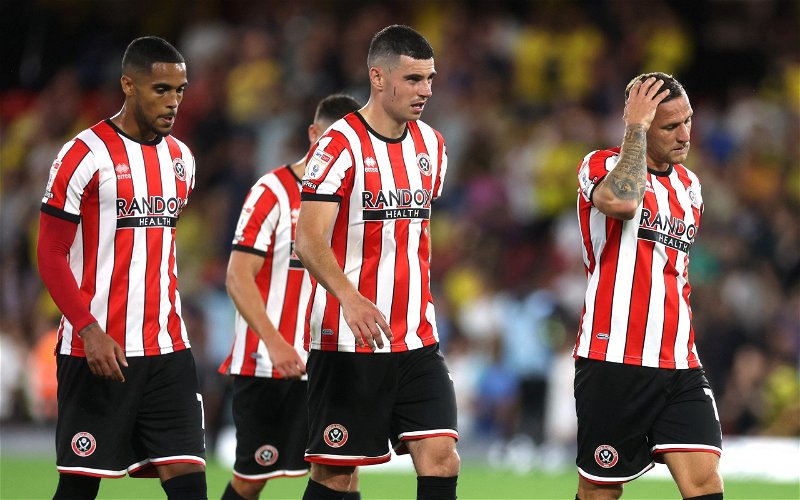 The Blades season started in defeat last night at Vicarage Road as they narrowly lost 1-0 to promotion rivals Watford.

It was a first chance to take a look at Ciaran Clark in a Blades shirt in a competitive match. Promising teenage forward Daniel Jebbison started up top for United, which meant Rhian Brewster and Billy Sharp were on the bench, along with the newest addition to the squad Reda Khadra. Ahmedhodzic missed out due to suspension, Basham had a hamstring injury, Robinson is having a scan on his knee and Doyle is still recovering from his thigh strain.

It was Watford that started on the front foot with Dennis looking really sharp, but after the lively forward got the better of Clark, his strike partner Sarr saw his shot go wide after getting in front of Norrington-Davies. On 15 minutes, Clark was given a yellow for tripping up the off the ball run from Dennis. Meanwhile at the other end Berge registered United’s intent with the first shot on target from distance, taking a deflection which saw the keeper gather the ball comfortably.

The Blades looked dangerous on the break in the first half as Ndiaye latched onto Jebbison’s flick-on only to be denied by Bachmann. United had another good chance at the end of the half when Jebbison whipped a first time right-footed curling effort towards the top right-hand corner, which the keeper tipped over the bar.

The deadlock was broken early in the second half as United played a short corner routine that didn’t work as planned and Watford broke at pace which ended with Sarr teeing up Joao Pedro who fired between the legs of Foderingham. Though United had the right to be furious with the referee as he got in the way of John Fleck for the short corner routine. However, United did have two chances to stop the goal when Fleck and Norrington-Davies both failed to clear the ball before it got to Sarr.

Heckingbottom responded to the goal by bringing on Khadra, Brewster and Osborn, and later followed by Sharp as United searched for an equaliser. They nearly found the equaliser when a freekick was clipped in by Fleck, Egan peeled off to the back post, but couldn’t direct the header on target.

That was the last chance for the Blades, and they ended the first match of the season with a 1-0 defeat. They have a chance to get their first win on the board on Saturday against Millwall, at Bramall Lane.