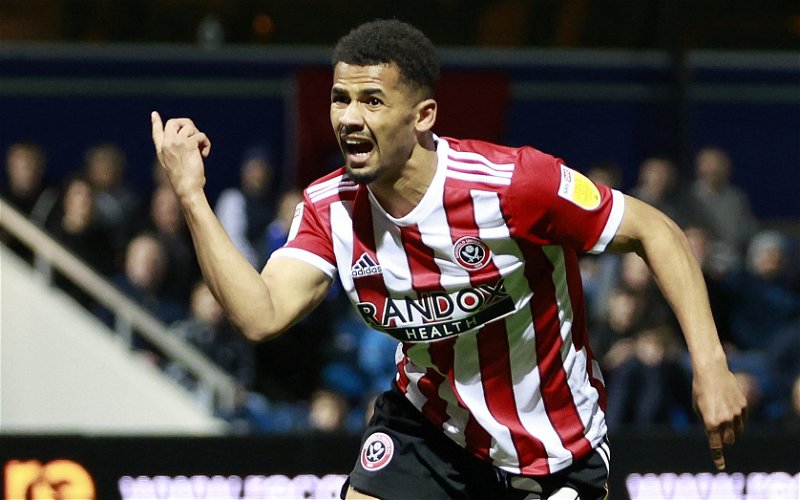 Sheffield United’s hopes of securing a ticket into the end of season dance took a huge step forward after a rampant 2nd half comeback in the capital saw them deservedly beat Queens Park Rangers. The home side who effectively had nothing to play for, had announced their manager Mark Warburton was moving on prior to the game, but led 1-0 at half time with pretty much their first attack. The Blades had dominated the ball but again had struggled to forge any clear chances and it was a timid performance in the attacking areas from the side that needed the result. After Austin’s header, United had a sticky spell before the break and it needed a significant change for them to avoid a disastrous result. Credit to Heckingbottom and the coaching staff, as the visitors came out and completely dominated the home side in the second half. Effectively camped in the QPR side, it seemed only a matter of time before the goals came and Ndiaye and then Robinson turned the match around. There was still a late scare when from another rare attack, Dunne struck the bar but in stoppage time, Hourihane’s delicious volley sealed the three points in front of the jubilant Blades fans. 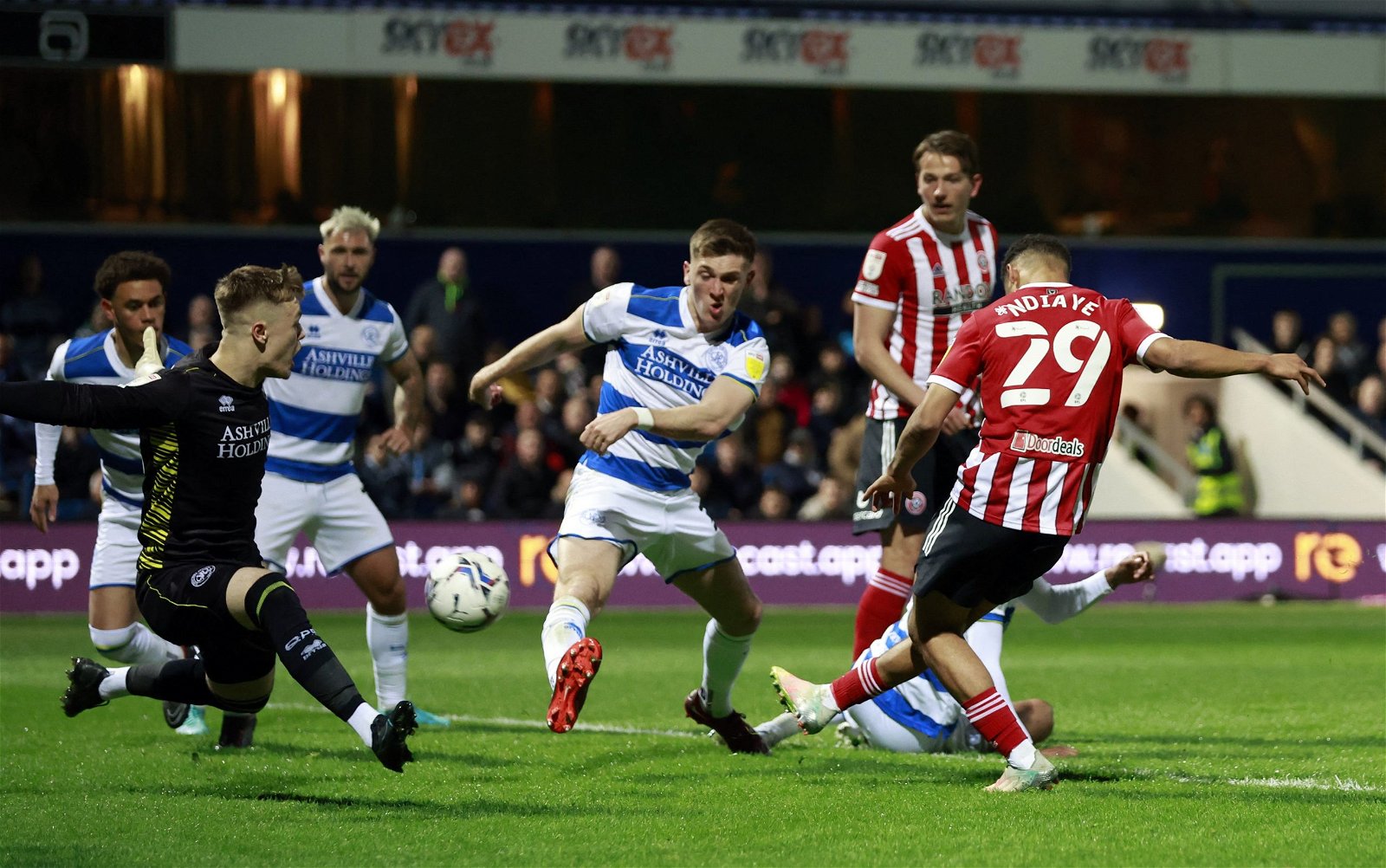 Before the game United were given a blow when it was revealed Sharp had picked up a calf injury and was not in the matchday squad so it was an unchanged starting line up but it was a very inexperienced bench in terms of striking options. Warburton, in his final home game as manager, changed things round with veteran Austin starting and a start for young keeper Mahoney in place of ex Wednesday keeper Westwood.

The game started with United in the ascendancy and they moved the ball around nicely with Norwood having an effort blocked and then an early corner seeing Basham nod wide on the stretch at the far post. The Blades were moving the ball about and dominating the possession and Gibbs White’s ball was just overplayed for Sharp but Norwood was controlling the midfield and Rangers were being forced back.

Berge had a surging run where he came across and after his pass then fell to Stevens, he could not quite angle his shot and it was blocked away for a corner. Soon after Gibbs White and Ndiaye exchanged flicks but it was maybe one back heel too many and the home defence smuggled it away. Adomah tried a ‘Blanco’ style flick which was oddly not penalised but it did at least allow Robinson change to hurl over a throw which caused problems before Rangers managed to finally clear.

Fleck then broke with a run but took too long before a defender nicked the ball away before Ndiaye then also had a run but he too, took too many touches and the ball was poked clear. United were seeing all of the ball and looking to probe but the final moments lacked quality and a Basham shank wide from a corner was as close as they got as they had still not tested the young keeper.

As often happens, United’s lack of potency and penetration was made to pay when Rangers with pretty much their first attack of any significance, moved it over to Adomah who was given too much time to come inside and put over a cross with no pressure on the ball. Still United should have dealt with it but Basham was ball watching and AUSTIN stole in with a downward header into the corner past the motionless Foderingham. It was a really poor goal to concede and completely against the run of play.

The next spell saw United give the ball away and Osborn running it out summed up the frustration that the Blades had in going behind when they had not been troubled prior to this. A few loose passes and moments of indecision and you worried that the game was starting to get away from the Blades.

United tried to respond but Stevens and Berge’s link up did not quite see the finish from Gibbs White, whose finish lacked power and was easily saved. Berge then came inside and fed the ball to Ndiaye but his finish was rushed and well over. Osborn then got in down the right but his cross was cleared at the near post.

The final minutes of the half saw Rangers have another effort on goal as Austin tested Foderingham and after the keeper pushed away, the Blades got lucky as the ball did not quite sit for the incoming forward. The half time whistle came and Heckingbottom darted into the tunnel, Klopp like, as he clearly wanted to prepare his team talk that he needed to affect some much-needed changes in urgency and forward play that may yield more chances at much needed goals.

After the break, the Blades came at Rangers from the outset. They won an early long throw that Mahoney made a mess of and Gibbs White poked it goal wards but McCallum cleared near the goal line. Soon after from the other side another ball was swung in and the ball was finally cleared. The Blades had Rangers completely penned in for a period. The next effort saw Norwood send a cross over and Robinson cleverly flicked his header goal wards but Mahoney made an excellent flying save to push away.

Gibbs White and Berge linked feeding Osborn but the ball was not quite accurate as Gibbs White waited to pounce but led to another corner. The ball came over and Gibbs White met this and flicked his header onto the post and it bounced across the line and eventually cleared as no United player could react to turn it home.

The pressure was incessant and it was wave after wave of attack with set plays and long throws causing real issues as much as open play at this stage but United seemed like they would surely get back into it and sure enough the leveller came. On 54 minutes, another ball over from Norwood saw Egan head across goal and as Berge turned to shoot, the ball bounced off a defender and fell for NDIAYE who scored from close range amongst a sea of bodies around him. It was a vital leveller but United were quickly back to half way sensing they needed another goal and the win they needed.

United won a series of corners and then Gibbs White had another header at goal that was saved before Berge fired wide after more good build up. The Blades were absolutely dominating the game and kept powering forward and looking for opportunities. The home side replaced Austin with Dykes but it did not change things and another good flowing move saw Robinson’s shot was deflected wide for a corner. The delivery came over and Egan headed across but Berge could not quite react. Another corner was headed over by Egan who was dominating in the box but just could not quite execute the opportunities despite his aerial domination.

Gibbs White did well down the right-hand side with superb skill to come out of a tight spot and come inside but Ndiaye’s shot was blocked. The young striker went down with cramp soon after and he had to come off for Osula. This was just after a double home change when Kakay and Thomas came on for Amos and Dozzell.

The vital second goal came when a clever free kick routine as Fleck played in Norwood who sent over a high floated ball that Basham met and headed across and ROBINSON came in and absolutely powered the ball into the net. It was a goal reminiscent of the Bob Booker goal at Loftus Road back in 1991 in another vital end of season goal! The celebrations were as jubilant with a few fans coming onto the pitch to join the now popular Scouse defender!

United carried on attacking rather than sitting back and Berge and Stevens linked to lead to an opportunity to Gibbs White but his shot deflected wide. The loan man was chopped down in the corner before Osborn was then also taken out as the free kick was finally give. Egan got the run on his man as another ball came across but his header from point blank range was blocked as the Irish centre back will have wondered again how he has not scored a goal in the game!

Fleck then found a way through and fed Berge but his shot lacked power and was straight at the keeper. United looked like they wanted to kill the game and were going for the jugular but after such domination for 40 minutes, the home side finally mounted an attack! They got it forward, and Robinson had to clear, but then out of nothing ball to the back post and Kakay bounced a volley across, and Dunne instinctively hit it, and it bounced off the bar and eventually away after a bout of pinball in the Blades box. It was a let off after such a dominating performance from Heckingbottom’s side. Soon after this Foderingham could not quite gather a cross and Rangers sensed they could maybe get an unlikely point. This feeling was strengthened when the referee adjudged there would be 8 minutes of stoppage time, which was ironic as it was the home side that had time wasted for long periods of the game.

Fleck, McCallum, Robinson and Johansen all got yellow cards late in with a skirmish involving the latter two seeing Robinson almost ‘WWE slam’ his man in an attempt to shake him off! Hourihane replaced Fleck as the midfielder seemed to tire at the end.

In the first minute of additional time, Osborn got down the right and set over a cross which Osula poked wide on the stretch. The next attack saw the game sealed as Norwood found Berge and the Norwegian sent over a lovely deep cross which HOURIHANE hit first time on the volley to smash home into the roof of the net and spark wild celebrations behind the goal.

The Blades saw out the final minutes with ease and even had opportunities to break and maybe score more goals. In the end the verdict probably flattered the home side who had been well beaten and given a real going over in the second half. A massive win for United who turn up the heat on their playoff rivals playing later this weekend.