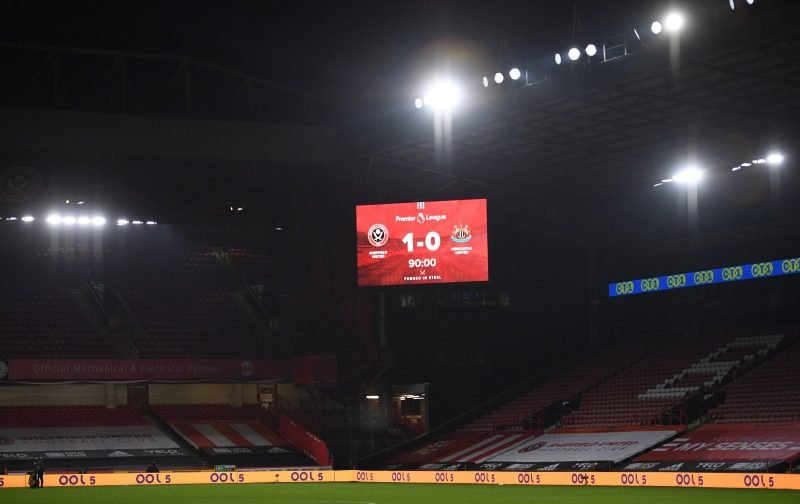 Finally, at the 17th time of asking this season and after 20 games without a win in the league, the Blades can finally celebrate a win again! A 1-0 victory over Steve Bruce’s Newcastle at the Lane was in the end well deserved. It took a VAR decision and a Billy Sharp penalty to settle the game but the home side was the much better side and dominated the first half when it was eleven v eleven. Oddly, the visitors improved after Ryan Fraser was sent off and the game became scrappy but a handball decision saw United get another decision in their favour and Sharp did the rest. A late scare when Jayden Bogle nearly put the ball into his own net jangled the nerves but the Blades held on and they had a win when it seemed like it might never some!

Wilder only made one change from the side that won in the FA Cup at the weekend with Oli Burke in from the start for Lys Mousset who dropped to the bench. Newcastle began with just Callum Wilson up top with Andy Carroll employed from the bench after starting at the weekend. There was still no place for Allan Saint Maxim who was still recovering from COVID-19.

The game started with Ramsdale earning a free kick as Wilson tried to stop his kick out but the Blades won an early corner that was cleared. Newcastle’s first attack saw an excellent Fraser cross but Bogle headed away.

United started by playing some good football and Burke had a cross cleared by Fernandez and then McGoldrick played a neat ball into Burke but it was blocked out. It was all possession stuff and very patient and Lundstram hit a shot on the turn after more good work from the two strikers but it was always curling away.

On 12 minutes lovely football saw Fleck, Burke and Lundstram move it about quickly all one touch and McGoldrick opted to have a first time shot and Darlow saved. It may have been offside but it was enterprising stuff.

The next attack Lundstram headed across and Bogle tried to flick on but it came back to Lundstram who fired badly over when well placed.

Fraser tried to go through on the break but Basham got back to defend well and outmuscle him. Newcastle had 10 men behind the ball and was clearly playing on the break. United remained patient and it was the most football Norwood and Fleck had seen all season.

27 minutes Basham’s mistake saw Ramsdale have to scurry out and boot away and from the resulting throw Fernandez whipped a super cross over which Wilson met getting away from Basham, but the striker’s header bulleted just wide with Ramsdale motionless.

United were back on the attack and created a similarly good chance when Ampadu sent over a superb deep cross but McGoldrick’s header caromed off target as he was challenged by a defender.

More good work saw the ball moved around and Fleck had a shot blocked before they worked it across and Osborn’s cross was cleared. Fleck then played it down the line for Burke who drifted inside but his shot was blocked before at the other end a timely reminder came for the Blades to stay alive. Newcastle broke and were 3 on 2 and had men over but as the ball was set up for Hayden, Osborn made a superb block. The visitors won a corner that saw another free header, this time Hayden and the ball struck Egan with a delay as VAR had a look at it for a possible handball but deemed the contact accidental.

The Blades went back on the attack and Burke again used his searing pace to get in but Fernandez made a last-ditch block as he drew his foot back.

The next attack came down the other side and McGoldrick put over a superb cross that seemed like it just needed turning over the line but somehow Lundstram missed it as it appeared to go through his and a defender’s legs. Bogle then got in and cut inside and forced Darlow into his second save of the half but it was straight at him as he beat the ball away.

It was excellent stuff from United and the momentum was all with the home side but they had not got the crucial opening goal or tested the keeper enough. Fraser was late in on Fleck and was booked and then incredibly only a few minutes later he went in late on McGoldrick and the tackle earnt him a second yellow and an early departure. It was a stupid challenge to make when already booked and so soon after the first one.

The second half saw United create an early chance when Osborn sent over a cross and the ball fell for Bogle and from close range, Darlow made the save. Two of United’s three attempts on goal had come from the former Derby man.

Wilder made a move early as he took Basham off and Brewster went up top as the Blades went to 4 at the back and McGoldrick dropped into the hole. The next stage of the game saw United have a lot of the ball but Newcastle was now sitting deep and as a result, the Blades put on Sharp for Burke in an attempt to find the breakthrough.

The Blades has struggled to create much and ironically had looked less threatening with a man advantage but then Bogle again came inside but thrashed his shot wide. Brewster then put over a dangerous cross but no one was at the end of it.

Newcastle had not threatened but Schar’s attempted free-kick from halfway to catch Ramsdale out did not have the desired effect and the keeper got back easily.

It had been a frustrating second half though and Bogle slipped to let Wilson in but United got bodies back but the chances were not coming freely. United got down the left and tried to work an opening and Bogle pirouetted but the ball spun away and was cleared. McGoldrick’s cross was then headed well wide by Brewster on the stretch as the clock ticked into the last 20 minutes.

On 73 minutes another decision in United’s favour changed the game. The ball over the top saw Sharp and Fernandez tussling for the ball and as Sharp wrestled for it, the defender seemed to use a hand to knock it away. The Blades players went up straight away. After it went out, VAR was called and Andy Madley was told to go and have a look at the monitor. A sure sign that it may be overturned and sure enough he quickly pointed to the spot. SHARP took it and drilled it low into the right-hand corner of Darlow’s goal who went the wrong way. It was his 100th goal for the club. 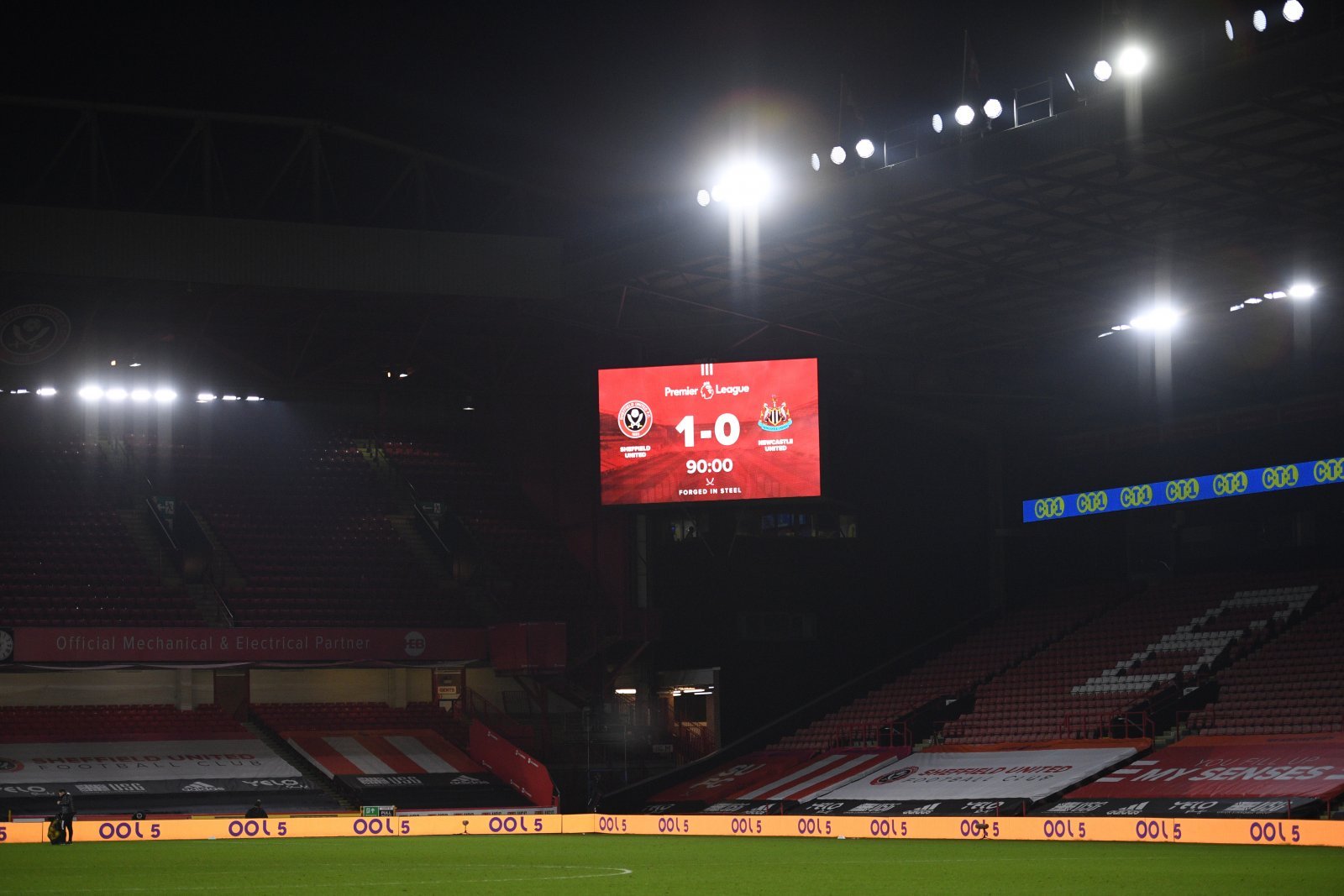 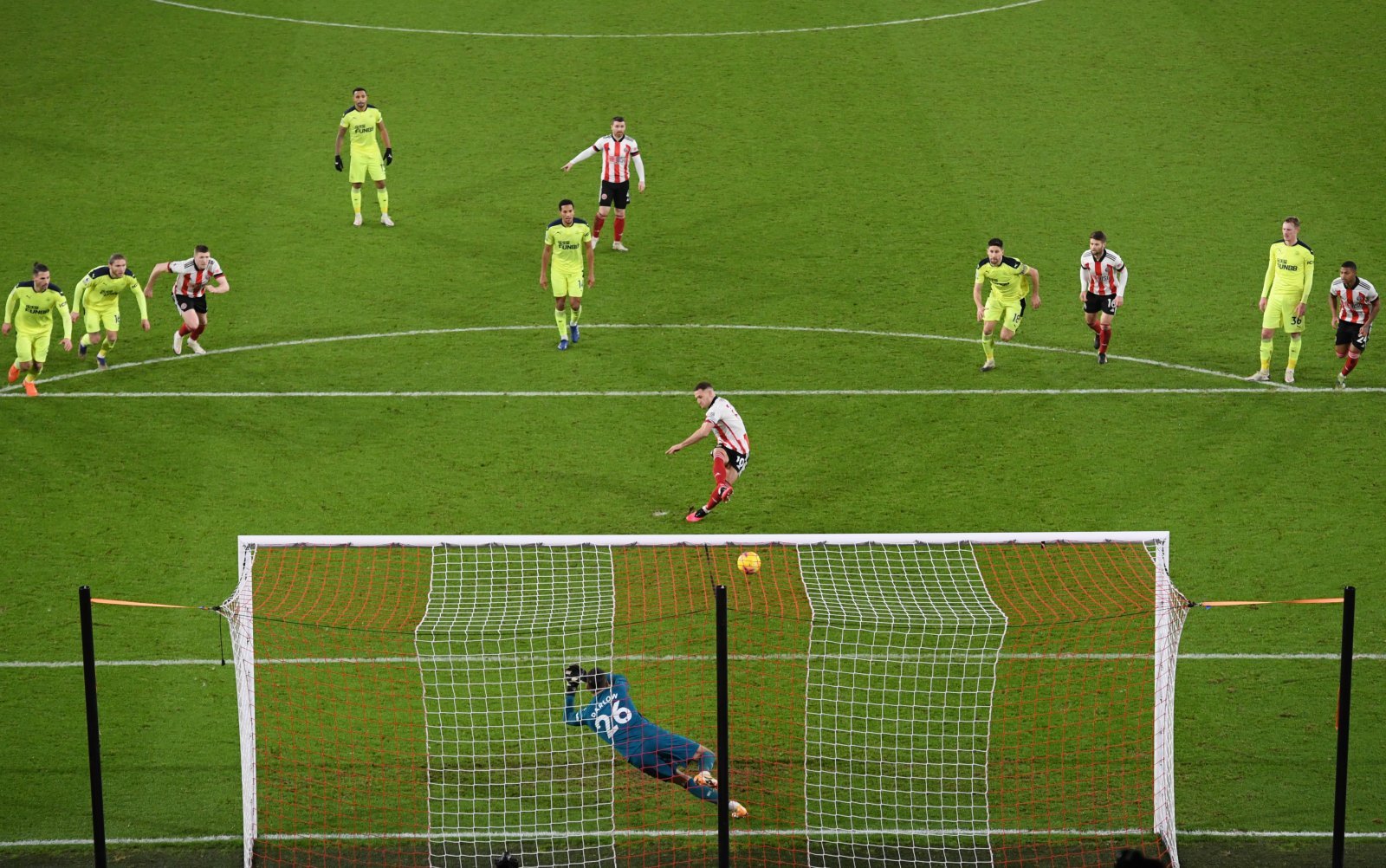 Ritchie came on for Dummett for Newcastle and then Brewster was away but his shot was just wide after a powerful run. Carroll was then sent on for Fernandez as Steve Bruce know they had to go for it with just over 10 minutes to play. Sharp was then booked for a bad foul on Schar and on another day could have seen red for a late and high challenge but VAR seemed happy with the original decision.

Norwood gave it away on halfway and Newcastle were away but Hayden’s cross was flicked at Ramsdale by Wilson with his head. At the other end, Brewster then worked space and his shot deflected onto the post off a defender, with Darlow beaten. It was so close to sealing the game.

Schar was clearly still wound up after the Sharp tackle and body checked McGoldrick cynically to earn a yellow card himself before at the other end two silly fouls from Egan and then maybe even more so, from McGoldrick, saw a free-kick right on the edge of the box. Sub Murphy took it but it was straight at Ramsdale.

The game entered 6 minutes of stoppage time after all the subs and the VAR incident for the penalty and United saw the first part out well although Brewster ran offside from Sharp’s pass and chipped wide anyway. Jagielka came on for McGoldrick as United were nearly there but Ampadu’s throw out of play saw one last chance as the goal kick was boomed upfield. It dropped for Bogle who heard a shout from Ramsdale but breasted it back to where he thought he was but the ball went agonisingly towards the goal but fortunately the right side of the post. The corner came in and a shot was hit wide before the final whistle went and United had finally won a game!