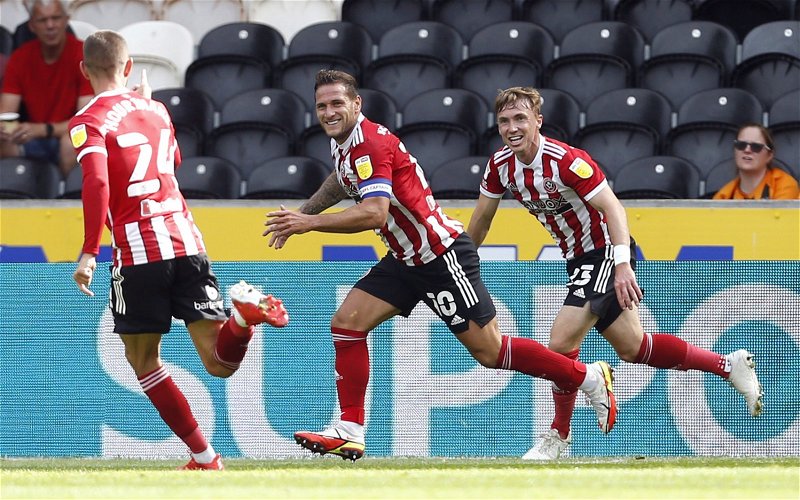 United’s travelling 4,000+ support went away happy as United got their first away win of the season as they saw off Hull City at the MKM Stadium. The Blades took the lead thanks to a Billy Sharp header from Morgan Gibbs White superb cross and could have made it two-nil but Matt Ingram denied Sharp from the spot after the skipper had been hauled down. After the break, two John Egan headers from Conor Hourihane corners effectively sealed the three points. Lewis-Potter’s goal was a mere consolation for struggling City who in the end were well beaten.

The Blades starting lineup had four changes as in came Conor Hourihane for his league debut and returning were Sander Berge, Ben Osborn and Ben Davies. Iliman Ndiaye was rested after playing twice in a week and was joined on the bench by Norwood but there was no place in the matchday squad for either Jack Robinson or Luke Freeman. However, a late change came when Rhian Brewster was brought in for Berge after the warm-up. 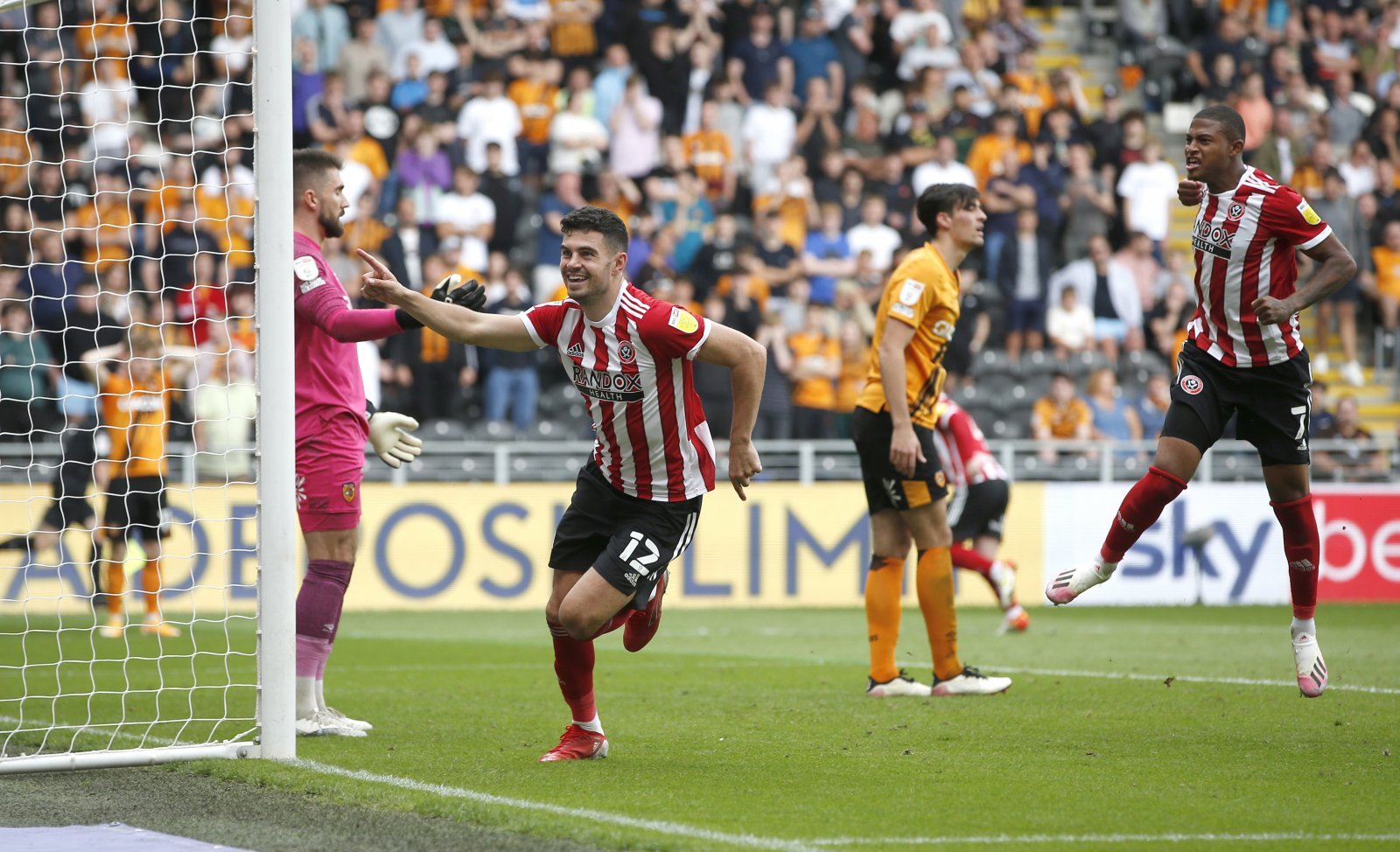 The game started with both Osborn and Norrington Davies giving the ball away under no pressure and Hull won the first corner of the game but it came to nothing. Sharp failed to hold it up and Hull came forward forcing another chance after Baldock failed to score but Smith fired well over. Norrington Davies was well forward but could not deliver the cross before the first decent United move saw Brewster and Hourihane nearly link up.

Hull had a brief spell again further up the field and a cross came over but was cleared before good football saw Egan step out and find Gibbs White. His ball put Brewster in on the angle but Greaves got back to make the block.

Hull had half-hearted appeals for a penalty on the angle of the box but Fleck had got the ball before Gibbs White’s cross was overhit. However, on the next attack, the Wolves loanee got the ball on the right and sent over a delightful cross that was meat and drink for SHARP who headed down and in.

Hourihane gave the ball away before Wilks got the better of Norrington Davies and sent over a great cross but Baldock did well to get his foot in and deny Lewis Potter.

Fleck’s excellent run saw him carry it through the thirds and he found Gibbs White whose powerful shot was pushed away by Ingram.

It was a strange game with little quality on show and it being of a very slow pace. Both teams were very sloppy in possession and one giveaway by Osborn saw Smallwood take a long ranger that Olsen palmed out unconvincingly before gathering.

United had not built on the goal but Hull had offered minimal danger the other way before patient build-up saw Brewster try a long-range shot that Ingram held. At the other end, a diagonal ball saw Elder in lots of space and Hourihane brought him down. A flurry of corners came for the home side and their best chance as Olsen stayed at home and Bernard nodded wide at the back post in a crowd of bodies.

Coyle then blazed horribly over after Hull had won a corner, they never should have been given with the ball going out clearly in the build-up.

On 42 minutes, United had a great chance to double their lead. The ball over the top sent Sharp clear with a man on the far side playing him on, albeit in a tight call. Greaves got back but was the wrong side of the striker and his clumsy challenge saw him get his man before any play on the ball and the penalty was an easy decision. The Hull man was booked in the double jeopardy rule even though he was the last man.

Sharp took it but it was not right in the corner and Ingram made a smart save down to his right. You felt this might be a pivotal moment in the game. From the corner, Sharp got a bang on the head compounding a poor few minutes for the United captain. After treatment, the skipper was fit to carry on and little happened in the additional time added on.

The second half saw Honeyman and Cannon come on in a double change for Magennis and Smith but one incomer, Honeyman was booked for a late challenge on Fleck, maybe in retribution for a challenge not long before! The Blades managed to move it well down the right with Gibbs White involved and Ingram could not prevent the corner

United had not scored from a set play this season but after winning a corner, the ball came in from Hourihane and after Sharp blocked his man off ‘intelligently,’ EGAN headed span off and powered his head into the net, albeit with a slight flick off Greaves. Finally, the Blades score from a corner!

Norrington Davies was hardly booked and wrongly penalised for an alleged foul on Honeyman and this saw a free-kick headed behind. The corner came out and the shot from range was straight at Olsen.

The game ticked over towards the hour mark and Brewster then was chopped down leading to a booking for Smallwood before Gibbs White jinked inside superbly but his shot was flicked over by Ingram. We then saw a series of set plays for the Blades. The feature of many of these seemed to be incessant tussling between both sets of players with Sharp a feature again! From a corner from the same side as the second goal, Hourihane put it over and with Gibbs White thrown down and Sharp also going to the deck, EGAN managed to get across his man and nod home at the near post beyond Ingram and he had his second, and United’s third!

United looked in cruise control and opted to take Hourihane off and put on Guedioura. His first contribution was to scythe down his man but the referee played advantage and a neat move saw the ball come across from the right and was cushioned back for a clear chance but Davies made a smart block to loop it into the grateful hands of Olsen. Guedioura was booked after play stopped right down at the other end.

There was a series of niggle fouls after this before Smith came on for Moncur. Appeals for a Hull penalty were waved away as Norrington Davies got enough of the ball to recover his earlier error. Brewster took another potshot but this was miles over.

Hull did finally get a goal after 6 without one when Davies’ sloppy clearance was loose and former Blade Smith put over a great cross and with Baldock sleeping, LEWIS-POTTER was able to react quickly to side foot home.

Sharp came off for McBurnie but not before another tussle with a Hull player as he left the field! Smith had the ball in the net for Hull but the tight offside went for United this time.

Osborn had a break and put over a cross but Brewster could not quite get there first before McBurnie linked well with Osborn but the ball was just beyond Gibbs White.

Davies came on for Basham before Brewster had another shot that was straight at Ingram again before Coyle had a run at the other end but his effort was well over the bar.

The game entered 5 minutes stoppage time and United looked as likely to score again as Gibbs White was again involved and a lovely switch of play saw McBurnie in on the angle and his shot was tipped wide by Ingram but oddly a goal kick was given as the officials missed the touch.

Honeyman bought another foul after he kicked through Fleck but the free-kick was cleared by Basham and the game petered out with the Blades in possession as the full-time whistle went. United had picked up 7 points out of 9 and moving in the right direction.