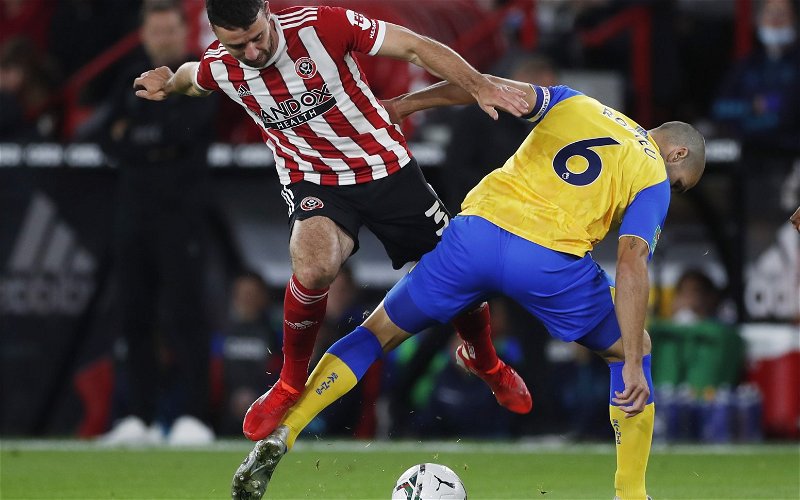 The Blades Carabao Cup campaign ended after a penalty shoot-out defeat to Southampton at Bramall Lane. In an entertaining and very open contest, United led early on thanks to the returning Enda Stevens but was pegged back before the break and after Ndiaye and Osborn missed clear chances, the Blades then trailed. Oli McBurnie’s strike saw parity restored before a late Wes Foderingham wonder save took the game to penalties. In the shootout, Brewster and McBurnie missed and United was out.

United made eleven changes whereas Southampton made nine from the weekend games showing that the game was maybe not a priority for either manager.

It began in a very open style with both teams attacking. Southampton could have been ahead in the first minute bit Foderingham made a smart reaction save from Broja before United then were on the attack but the ball across evaded McBurnie. On 8 minutes, the Blades took the lead. Bogle did well down the right and beat his man before pulling back an intelligent cross for STEVENS to calmly steer into the corner giving Forster no chance.

Soon after Burke sprinted away and was in on the angle but his finish was wayward not knowing whether to go for goal or cross the ball. His pace was causing problems and he nearly got in again after Norwood’s ball was over the top.

Diallo has a shot over the bar before, at the other end, good work from Ndiaye saw the ball worked to Guedioura but his effort was curled over. The game was end to end and Tella was the next man to have a chance but was narrowly off target after good work down the right-hand side saw the opportunity created. Lyanco headed over after Southampton won a flurry of corners in quick succession and it was not long after they were level. United failed to clear and Romeu had lots of time to send over a deep cross which DIALLO nodded down and in. It was a simple goal in its creating and execution and a disappointing one to concede for the home side.

United tried to respond and the talented Ndiaye twice showed his quick feet and nimble skills and on the second chance, he came inside and beat his defender before curling his effort narrowly wide. It was a great chance to restore the lead.

McBurnie and Lyanco were booked for squaring up to each other as the ball came forward as referee Brooks started to frustrate both sets of players and fans with his inconsistent approach to contact. Burke and Freeman both seemed to be struggling and needed treatment as the game became a stop-start.

Southampton won another corner but the Blades cleared with Guedioura showing his experience to help the Blades see out the half without a further concession.

The second half began with the two aforementioned Blades players who had gone down coming off with Osborn and Brewster on for Freeman and Burke. Ward Prowse came on for Redmond for the visitors. The home side had a great chance to lead as McBurnie and Brewster linked to feeding Osborn with a clear one on one chance but his first-time effort hit the legs off Forster and went behind somehow.

Buoyed from this let off, the Saints sprang forward and won two more corners. Both were taken as short ones and both times, United did not react and on the second one, they had two on one and the cross came over and was converted from close range from SALISU.

Southampton looked to turn the screw and Tella and Romeu had shots blocked as United were now at full stretch but still looked a threat themselves and twice Brewster got down the right but could not quite find the cross.

On 68 minutes, United was level. Osborn found space down the left and sent over an inviting cross and MCBURNIE met it and despatched it into the net taking advantage of gaps all over the Saints’ backline.

Southampton tried to take advantage of a high line but three times they were caught offside. Basham had an effort from a corner but United was now having to defend and throw bodies in the way as Southampton looked to regain the lead in this topsy turvy contest.

Bednarek replaced Lyanco and Fleck then came on for Ndiaye, as the youngster seemed to cramp up again. The game entered the final 10 minutes and McBurnie had a headed effort just wide from an Osborn cross before Adams came on for Tella in the final change for both sides.

Perraud sent over a delightful cross that Adams seemed certain to score but somehow Foderingham got back to tip the ball onto the post in a fantastic save. Southampton won another series of corners but United held firm and then right at the end more good work from Norwood and then Osborn saw the ball come over but Brewster could not finish and the game went to penalties.

Brewster – Sheff Utd. MISS 1-2. Stutter run up. Hit it hard but Forster guessed right and nowhere near the corner.

Broja – Southampton – MISS 1-2. Foderingham gets across to push it onto the bar I think. Fantastic save!

Diallo – Southampton – SCORE 2-3. Low to the corner but not smashed. Foderingham went the right way but could not quite get it.

Romeu – Southampton – SCORE 2-4. Rolled into the corner and Southampton win the shootout 4-2