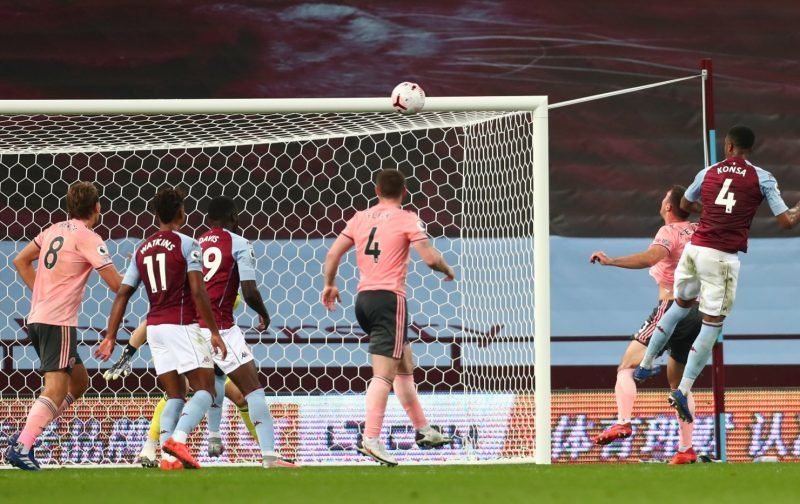 It was another defeat for the Blades whose poor start to the season continued after they were beaten by Aston Villa on Monday evening. It is now 5 straight league defeats going back to the end of last season for Chris Wilder’s men. United gave a committed performance and kept a solid shape after losing John Egan to a red card on eleven minutes but lack of concentration on a set play again saw Konsa lose Stevens to score and United had no way back.

United sprang a few surprises by dropping Ollie Norwood in place of Sander Berge and also starting with McGoldrick and Oliver Burke upfront with no place for McBurnie or Sharp. All three of those left out were on the bench. There was no place for any of the new wing-backs who had done well at Burnley with manager Wilder naming a more conservative defence with both Ampadu and Robinson named.

Villa gave debuts to big-money signings Martinez, Watkins and Cash; with the latter two players who had been linked with the Blades in the summer but were boosted by skipper Jack Grealish committing his future to Villa for the foreseeable future after having signed a new contract.

United played their first league game in the new pink away strip as they returned to the scene of the first game after lockdown had ended in June with the controversy over the goal that never was.

Villa was on the attack early and Cash was all alone with Stevens nowhere near him and his deep cross was just too far for the stretching McGinn who had not been picked up either. On 3 minutes, another move was worked with Luiz’s dangerous cross headed just over his bar from Basham leading to a corner. Hourihane took it but Mings could not get enough on it. It was nearly 5 minutes in before United had any possession and McGoldrick won a free-kick but Lundstram did not beat the first man. A better cross from Lundstram nearly got McGoldrick in but Konsa got there first to clear. United made it to 6 minutes this week without conceding. Lundstram was then booked for a stupid challenge as he scythed down Grealish. He had not learnt his lesson from last week.

Disaster struck United on 11 minutes when Egan hauled back Watkins and was sent off. VAR looked at the award but went with the original decision citing him as the last man which he was and Ramsdale was not going to get the ball. It was a distance from goal but as soon as he grabbed his man he was in trouble. It was similar to the one where Christensen was sent off for Chelsea yesterday so at least the decisions have been consistent. United had nearly 80 minutes to play with ten men and as had happened at Newcastle, Egan had left his teammates with a mountain to climb.

United was struggling to get any kind of foothold in the game and more fouls from Baldock and Fleck saw Villa continue to threaten. They won a free-kick which O’Connell flicked just past his post. Villa was dominating the game and United now with a man disadvantage could not get going at all. Villa won another corner as Cash continued to cause problems down the right-hand side. The corner came in but the header by Luiz was straight at Ramsdale.

Villa continued to probe and have all of the possession as United could not get any kind of momentum at all. Baldock did draw a foul on his man to at least relieve some of the pressure in terms of Villa dominating the ball; even though they had not had many chances.

The game entered the half-hour mark and Hourihane’s cross was cleared by O’Connell after Grealish had found an opening.

Villa did start to struggle to find openings though and United kept a solid shape. Ampadu came on for McGoldrick as United went back to a 5 at the back and just left Burke upfront.

United had offered little as an attacking force but a good move saw neat play and Burke ran across the box and played in a delightful through ball and Basham was in on goal and was clipped as he got there ahead of Targett. The referee Scott pointed to the spot and after the VAR checks; the decision was confirmed. Targett was booked and not sent off due to the double jeopardy rule so the decision in this instance was correct.

With no Norwood and Sharp, Lundstram took responsibility but his delivery was telegraphed and a great height for a keeper, Martinez sprang to his right to make the save. The disastrous start for the Blades had continued with the failure to convert this golden chance. There was no chance of it being retaken as the keeper had waited before making the save. Lundstram compounded his error with an appalling corner straight after.

Basham was now playing in a more midfield role as United changed things again with a 4-4-1 formation as United tried to ensure they were nice and compact. Basham was close to Grealish when he picked up the ball.

Villa moved it about on the left and it was knocked inside for Hourihane whose shot was blazed over when well placed. Grealish then won a corner in the next attack but United stood firm and was able to clear. United had defended well after the initial spell and was keeping a solid shape.

There was an extra four minutes of stoppage time to be played for the different stoppages. Villa continued to ask questions. A silly foul from Basham on McGinn led to a free-kick right on half time. Grealish whipped it in but as Ramsdale stayed at home the ball evaded everyone.

The second half began with Konsu limping after he seemingly got injured as he came out but he carried on. Villa began with the ball and moved it about wide to create space and try and draw United from side to side.

Berge gave the ball away and Lundstram brought his man down leading to more possession for Villa for a period. Targett’s cross was held by Ramsdale though who took an inadvertent knock. Villa tried to find a chance through McGinn and Grealish but good work from Baldock saw United win the goal kick.

As the game approached the hour mark, Villa had struggled to fashion many chances but Watkins header was well over the bar. United had a bit of rest bite with Baldock in and then Berge had a chance but got the ball stuck under his foot when well-placed after running into the box. From the subsequent clearance, Villa broke up the other end and had another spell of play and continued to probe but United had held firm well so far. Basham conceded a corner before Davis came on for Hourihane.

For all the good work, poor defending undid United when the corner came across. Mings beat O’Connell to the ball who was blocked off again for the second week running and KONSA headed into the far corner of the goal with Ramsdale extremely slow to get down to the ball as it crept into the corner.

Osborn came on for Fleck as United tried to find new legs and impetus. The goal meant United had to come out and they made a chance when McBurnie came on for Basham.

Grealish had a shot wide after he ran into the last third. United tried to make headway with 20 minutes to play. United could not get much going and Grealish was pulling the strings and his ball led to Trezeguet clipping wide. United did not look like coming back into the game with 15 minutes to go despite the changes to personnel and the formation.

Watkins came inside and curled an effort over the bar after nice, patient build-up. The side most likely to get another goal were Villa as for all United’s hard work and organisation had been for nothing due to the poor goal they gave away.

A rare attack saw Burke do well and pull it back but it was cleared away from McBurnie and then Berge had a shot blocked. The next 10 minutes saw Villa have a lot of the ball and move it around but seemed content to just hold what they had. United could not make any headway and it kind of petered out with a lot of tired legs. United forced a late corner but Berge hooked well over. The additional three minutes of stoppage time saw little happen apart from Grealish’s shot being blocked by Lundstram and United’s shocking away form going back into last season continued despite a determined effort from the ten men.