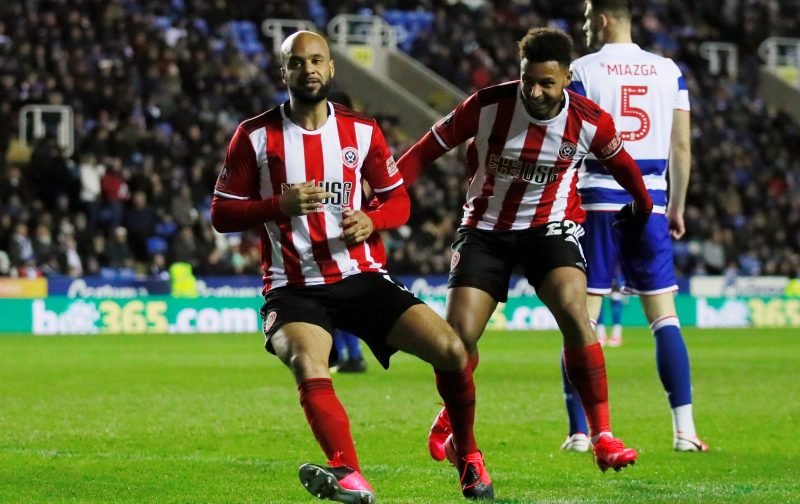 The Blades advanced to the quarter-final of the FA Cup after a less than impressive performance but ultimately a winning one in a game they led early on but needed a late goal from the old stager Sharp to win the game after a disappointing second-half showing.

United started with the backline that ended the game against Brighton 10 days ago but changed the rest of the line up with Berge in the axis of a three-man midfield alongside Lundstram and Luke Freeman. Up top was David McGoldrick and Lys Mousset. Reading started with the same line up as the previous league game; a victory against Barnsley.

The Blades began in confident mood knocking the ball about and were ahead in two minutes. Patient build-up saw the ball switched to the left-hand side and Osborn’s whipped cross was perfect for MCGOLDRICK to flick his header down and into the net. It was the first goal for the Irish frontman since last April at the KC Stadium.

The next 10 minutes, the Blades moves the ball around with fluidity and Berge was neat and tidy. McGoldrick came off the ball and was able to playmaker and the wing-backs were getting high up the field. Reading were struggling to get the ball off the away side and it was looking comfortable. However, Reading who had been second best by some distance had a chance when Meite hit a fierce drive when there looked no danger and Henderson had to make a superb save to beat the ball away. This gave Reading some new hope and they had a decent spell of possession forcing United back.

Normal service was resumed inside the twenty-minute mark and the Blades took back control. They won a corner which was whipped in by Freeman and Egan should have scored but headed over from close range.

United then had another chance when McGoldrick hit a shot from range but the keeper, Rafael made a comfortable save pushing it away. The next period of the game saw few chances and became mired in midfield with a number of petty free kicks given both ways. The game was drifting towards half time when a deep ball saw Rinomhota challenge with Basham and Baldock nearby and a push was penalised with the awareness of a penalty by Kevin Friend. There is no VAR in the FA Cup of course but it is doubtful it would have been overturned as it was a clear push from Baldock. Albeit soft but the Blades player did not need to give the referee a decision.

PUSKAS took the kick and hit it hard and low into the corner giving Henderson no chance and out of nowhere Reading were level. Baldock then committed a silly foul and started to lose his discipline just before half time as the home side sensed a completely different game. The whistle went and it was clear which side was going in the happier from a half which for most of it, the Blades had controlled but naive defending had cost them, dear.

The second half saw little happen in the early stages although Olise fired over. Rinomhota was booked for hauling Freeman down who looked dangerous with some slaloming runs early on in the second half. The game saw little quality and both teams were giving the ball away. Reading looked more confident on the ball than the first half and United were sloppy for a spell and could not get any head of steam up at all.

McBurnie came on for Mousset on the hour mark but Reading now maybe were looking the more likely with a through ball collected by Henderson and Meite nearly getting on Swift’s through ball. A dangerous Osborn cross saw McGoldrick flick a header just over as United finally found an opening.

Reading then had a spell on the ball and Egan and O’Connell had to make key blocks before United had another rare opening but Freeman’s long-range shot was saved by Rafael with the shot straight at him but needed dealing with.

Sharp came on for McGoldrick as the game then entered the final 10 minutes. Reading won a corner that came to nothing before United did likewise at the other end. The game had really lacked any quality in the second half and both sides seemed to be sleepwalking to extra time with Reading pleased to be holding a Premier League side and United struggling to find energy and quality to cause the Championship strugglers much of a headache. The final whistle went after two minutes of stoppage time.

The extra period saw a plethora of chances for both sides – Reading made two changes and Berge came off for Robinson with Osborn moving further forward. Rinomhota had a decent chance but toe-poked wide after Reading had knocked the ball deep into United territory. As the first period came to an end, Robinson found himself forward and after his cross was cleared, Freeman got on it and stood up a perfect cross for SHARP who peeled off and headed home in textbook fashion. United had the vital second goal and was now in pole position to advance to the next round.

After the turnaround, Retsos made his debut but gave it away as Reading looked to force penalties. McCleary sent a cross over that Baldock had to clear. Sharp and McBurnie took time out off the game in the corner area but Reading did have a final flurry. Pele’s shot was not hit hard but on target and Henderson had to push away for a corner. After the ball came back from the next attack, Pele then went even closer with a curling shot that went narrowly wide with Henderson was beaten to the wide. The final whistle went after two minutes stoppage time and despite a subpar performance, the Blades were in the quarter-final draw continuing a fantastic season so far.