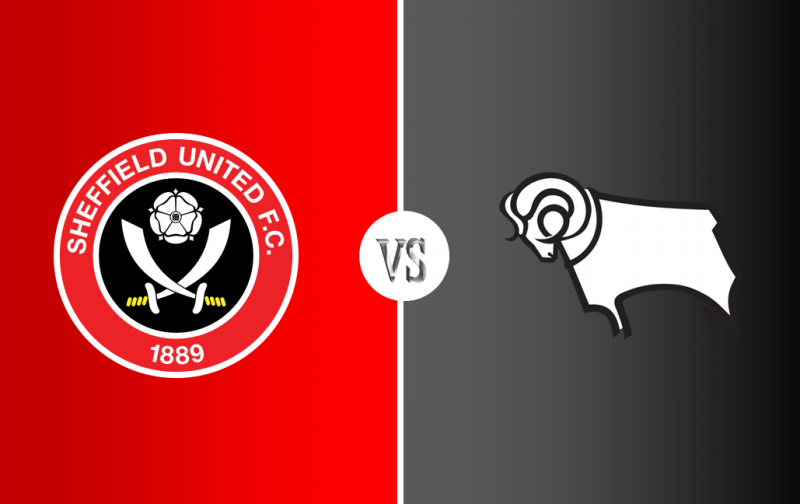 The Blades saw off fellow Championship side Derby in the 2nd round of the League Cup thanks to that man Billy Sharp again. Both sides fielded largely inexperienced and fringe players but Derby led through Dominic Sibley’s first-half strike. Luke Freeman headed level after a goalkeeping mistake after good work from Kyron Gordon before Sharp latched onto a poor back pass to win it.

Both sides made several changes from games at the weekend. The home side made eleven changes with starts for several young players with Daniel Jebbison starting upfront. Fellow youngster Illiman Ndiaye was back in the matchday squad after not featuring for any Blades side for some time due to his contract situation.

Derby had a very young side out with only the experienced defenders of former Blade Stearman and Forsyth standing out as seasoned campaigners. Another ex-Blade Ravel Morrison was on the bench.

The game started with Verrips called into early action after Lopata’s error and the Dutch keeper was not convincing as the ball spilt out of his grasp. At the other end Burke’s pace nearly got him in after Jebbison played him in but Allsop was out quickly. Sibley then had a shot wide of the post after the decent build-up. Derby then worked an opening but Stretton made a mess of a clear chance on the penalty spot.

The Blades struggled to create much but slowly started to move forward more as an attacking force and Burke and McGoldrick linked but Jebbison somehow screwed badly off target after the cross came over. Osborn’s cross was then headed over from McGoldrick. Stretton then had another decent opportunity but Gordon made a good block before Watson shot over.

Derby had shaded things and was rewarded with the opening goal on the stroke of halftime. Osborn’s foul was late and he was rightly booked and from the subsequent free-kick was played down the left and McDonald was able to send a cross over with no pressure on the ball. Brunt should have cleared but made a mess of it and SIBLEY swivelled and fired low past Verrips.

Robinson headed just wide from a corner before the halftime whistle as once again United trailed at home.

Jokanovic made a change at halftime as Fleck came on for Jebbison and United seemed to move McGoldrick further forward.

United was level on 53 minutes after they finally got a decent ball into the box and had someone on the end of it. McGoldrick played it out wide and Gordon sent over an inviting cross which FREEMAN met with a firm header but Allsop made a right mess of it and it spooned up and over the line.

As on Saturday, the away side nearly went straight up and regained the lead. United was cut open and Stretton was one on one but Verrips made a save with his legs and then after Robinson errored soon after United were able to scramble clear.

Ndiaye came on for McGoldrick on the hour mark but Buchanan then got away from Bogle and the full-back deflected the ball onto his post. At the other end, Freeman fired over after the keeper failed to gather before Sharp came on for Burke.

He immediately wrestled back possession and then nearly got in down the side and this was a precursor for the winning goal on 77 minutes.

McDonald did not look up and his back pass was short. SHARP was quick as a flash to seize on it and rounded the keeper and coolly slotted home. It was classic Sharp.

After this Derby tried to find something but United had more of the ball and had further chances on the break but both Ndiaye and Freeman could not quite link with Sharp after enterprising runs. 5 minutes of stoppage time were somehow found but United saw it out comfortably to advance to the next round.

United – I am not sure it was great at all and more of the same really in terms of laboured build-up, lack of end product and few chances but oddly it was still more entertaining than other games in that we saw some different players I suppose? We were very fortunate to win the game in that Derby maybe had more possession (not that this matter as we have seen) but did have some good chances too and had 2 clear ones first half before they scored and 2 after we made it 1-1.

Defensively we never looked secure but neither did Derby as both sides lacked experience and thus made mistakes. This made it a relatively open game. I felt both sides had half-chances early and Lopata got away with an early error. United came into it a bit more with Freeman getting involved and Burke nearly used his pace to decent use but was denied by last-ditch keeping/defending. Jebbison missed a sitter for us somehow putting it nowhere near when right in front of goal. Derby then had a good spell and played some decent stuff moving us around but Verrips was not convincing from a few moments. They had a few scuffed finishes and then the goal came from a daft Osborn foul and then Brunt could not clear and Sibley finished well. United had created little again and looked like they had mistakes in them the other way.

The second half saw us play further up the field and I thought we improved after the break but Derby had as many if not more chances than us. Freeman started to have more licence to get forward with Fleck alongside Brunt in the middle and had more space. The goal came from Gordon being well forward and a decent cross. The header should have been saved and a real howler but at least Freeman got into the box. After this, it was even and I felt they had as much of the game as us and we did not push on. They had a few half chances and started to look more likely so the Sharp change was needed. He gave us fresh impetus at the top of the field and got on the error to score the winner. He held it up and brought others into play and just looked a class above any of the other forwards on the pitch. Nearly had a few more and ran the channels well.

We saw it out in the end and got through. Just nice to see a few goals and a win after such a torrid time. I did not see the last round so my first win in person since the Norwich game of March 2020! Derby will feel they had more chances than us over the game and indeed first half had 2 or 3 and the same in the second half. Not sure there were tons of really clear opportunities for either side really which was odd as mistakes and the open nature should have seen more, especially with two very dodgy keepers. A draw and penalties may have been the right result but Sharp was able to get the goal and send us through. We certainly did not do enough to win the game and Rooney was right that Derby was hard done by but mistakes change games as we have seen.

Overall we were quite poor again to say we had many more senior players with basic mistakes in passing, control and crossing. It was all very once paced and static with little movement all game. I am not sure too many staked a claim. Freeman did ok but also was frustrating at times too. Not sure he was quite the brilliant performer I saw some claim but did one or two decent things. He does get in the box though. I thought Brunt was ineffective most of the night and at fault for the first goal and not sure he offers anything we have not already got. The two young lads made some mistakes at the back but kept plugging away and by the end had started to impose themselves more and did some decent stuff and showed good commitment and aggression. I am not sure Bogle did much right at all and was a bit of a struggle both attacking defensively. As much as Burke will get the usual criticism and he is poor, I don’t think he was any worse than McGoldrick (too slow to do things) and Jebbison who other than one decent ball was anonymous and was replaced at the break. Osborn and Freeman maybe stood out as the liveliest players but even they were only ok-decent. Sharp in 20 minutes looked maybe better than any other player in terms of desire and ability!

United had more first-team experience and players who have played this season than Derby but still made heavy weather of it and Derby actually at times played more incisive football. However, with fragile confidence, the win is probably as important as a performance at this point. Still no real grasp of the style we are trying to play – we tried to come out the back but often it did not work (Verrips as bad with his feet as hands) and the midfield did not move it quickly enough again. The forwards again were not a goal threat and the reliance on Sharp again is worrying.

One Reply to “Billy Blade Blasts Blades Into Round Three”