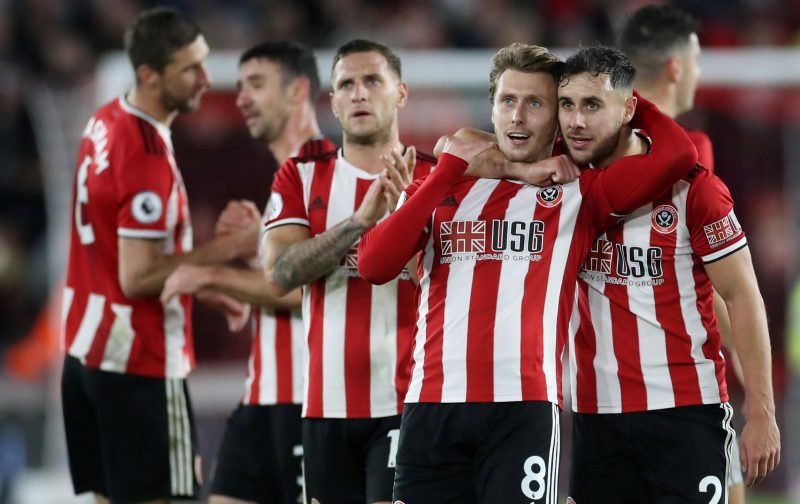 The Blades difficult start to the return of football continued when they were knocked out of the FA Cup by Arsenal. Its is now 3 defeats in a row for Wilder’s Blades who now find that they the hopes of European qualification in two competitions is now clinging by a thread. It was late heartbreak for United who got back into the game late on but then as they looked to a winner, got done on the counter as Ceballos broke and fired in at Henderson’s near post. It was harsh on United who had done enough to extend the contest.

The first game back at the Lane saw McBurnie, Egan and Henderson back for Mousset, Jagielka and Moore. There was still no place for Jack O’Connell. Arsenal opted not to start Aubamayang with Laczaette getting the start. Youngster Willock also was in from the off with David Luiz back in a three-man defence. There was no place in the squad for Ozil.

After the final strains of the Greasy Chip Butty anthem, United began well and attacking the Bramall Lane End; McBurnie won a free-kick which Norwood floated behind. It was a much better tempo from United with Norwood on the ball early and McBurnie a handful. Stevens fed McGoldrick whose cross dropped for Robinson but his shot deflected wide. The subsequent corner was cleared for another on the other side and Fleck’s delivery was headed back by McBurnie and nodded in by Lundstram at the back post. It was a similar goal to the one the Blades scored against the Gunners earlier in the season but this time VAR saved Arsenal as replays showed the United man was offside.

Undeterred, United came again and a long throw was flicked on and McGoldrick just missed on the stretch. The first 10 minutes had been much better from United as they forced the visitors back. Arsenal finally had an attack but Pepe got crowded out before he could get towards Dean Henderson’s goal. The United custodian had now disposed of his baseball cap he adorned to start the game as the wind was the prevailing weather condition rather than the sun. United tried to come again but good work from McBurnie fed McGoldrick but he dithered and the Arsenal defence cleared.

After the quarter-hour mark, Arsenal started to come more and Basham had to clear as Pepe got away from Stevens. Arsenal then moved the ball around well and was easing back into the game. They had not had any clear chances but took the lead on 22 minutes. McGoldrick gave it away too easily and it was moved up the other end and Arsenal played a ball into Lacazette who had his back to goal but Basham caught him on the angle. The reaction of the striker was theatrical (and he held his shin which was odd) but ref Tierney pointed straight to the spot. The VAR review saw the original decision upheld. Basham’s reaction said it all and as Wilder said after the game; it was ‘Rash from Bash.’

PEPE took the kick and converted easily into Henderson’s left-hand corner. It was a harsh scoreline after United had been the better side for the first part of the game.

After the drinks break Arsenal started to take some semblance of control and Robinson lost a header to Pepe and as the ball came back Laczaette had shot pushed away from Henderson. Arsenal had a half chance soon after but it drifted wide as United now were struggling for a period. Lundstram could not win the ball and in his attempt to recover things he fouled the Arsenal man but somehow injured himself, hurting his shoulder. As Arsenal broke, Fleck wildly lunged at his man and rightly got booked. Lundstram tried to carry on but he could not and was in some pain and he came off for Berge.

United tried to find a foothold back into the game but Norwood’s ball put Fleck in but he ran into his man before McBurnie and Willock smashed into each other after the ball ran loose. Not sure either player committed a foul but it was unfortunate as United were on the attack but the game had to stop for two head injuries. Both players were deemed fit enough to carry on.

Arsenal then got down the left again and Maitland Niles fired in a cross that Henderson had to get away and as the rebound fell it was fired wide by Tierney. Arsenal now was the better side but nice work from Berge led to a Norwood shot but it was comfortable but at least it was an effort on goal. Arsenal then had another chance when Pepe fired wide when well placed before Berge headed over right on 45 minutes. There was 7 minutes of stoppage time after the penalty substitution and a few stoppages but little happened of note.

United started the second half well and Stevens was well forward leading to a throw but the long one from Robinson was flicked on by McBurnie but straight at Martinez. Norwood then hit a cross that the keeper palmed away before Fleck pulled his shot badly wide.

United was driving forward well but it was a stop-start game with several players going to ground. On 55 minutes, United thought they were level when Norwood’s delightful free-kick was knocked forward by McGoldrick after Egan reacted to head home but the flag was up and VAR confirmed United had been rightly penalised again. It seemed like United would never score and this feeling increased when Robinson’s superb cross was met by Basham but he inexplicably headed wide with the goal at his mercy. His chance to make amends for his first-half indiscretion had done awry.

Arsenal showed a threat on the break and Egan and Norwood had to be alert to stop them threatening whilst at the other end and Stevens ball to McBurnie’s was overweighted.

On the hour Kieran Freeman replaced Baldock who looked to be tiring and for the visitors, they made a double change on 64 minutes, with Ceballos and Nketiah on for Lacazette and Willock.

Soon after, Berge got in and had his shot blocked. He played a nice ball soon after in a much-improved performance before Xhaka had a shot blocked at the other end. Robinson was booked for taking out his man as Arsenal tried to break.

The next spell saw several fouls as referee Tierney was determined everyone would notice him with much of the contact minimal for both teams. Sharp came on for Basham as United went to 4-4-2.

The game entered the final 15 and Robinson headed well over from a corner the game became scrappy for another spell. The final 5 minutes came McBurnie could not get it under control with a half-chance before United forced a bit of pressure and another long throw the goal finally came.

Robinson’s long throw as not cleared and bounced off two Arsenal defender and fell nicely form MCGOLDRICK who hooked home. There was no way this one would be disallowed and he celebrated in front of an empty Kop!

United now scented blood as the game entered stoppage time and won a corner after half chance and then the ball dropped for Sharp after an earlier shot was blocked, the striker’s effort was hard and true but well saved by Martinez. The corner was cleared but United was still on the attack as the game entered the final few minutes but Fleck’s poor ball saw Arsenal break. It was suddenly two on two. Stevens held up the first effort but then he did not get across to CEBALLOS, and Norwood and several others stood and watched. Henderson made the decision to go out and this maybe was the wrong one and he compounded it by leaving his near post and the ball was cleverly drilled home by the substitute. It was tough on United and after another odd foul given against Fleck, when he was the man fouled, the final whistle went soon after.

One Reply to “Better Performance But Result Still Ends in Defeat”