40 Years On… The Unwanted Anniversary 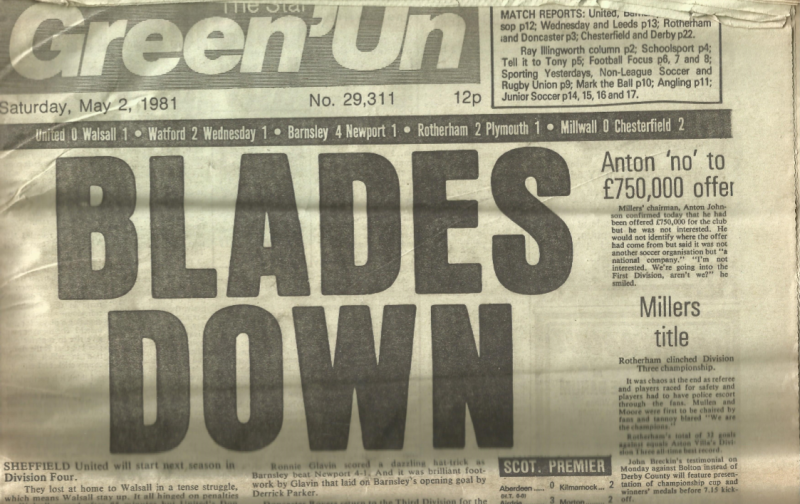 Tomorrow will see Sheffield United reminded of an unwanted anniversary. It will be 40 years to the day since the Blades were relegated to the old Fourth Division, ironically, in a year which has also seen relegation bestowed upon the from the Premier League.

2nd May 1981 is, perhaps, United’s darkest moment as a football club in club history. A defeat at home to Walsall marked a miserable period that had seen the Blades fall from the First Division (now Premier League) to the bottom tier, all in space of five seasons. United had finished bottom of the old First Division in 1976.

Promotion, and indeed relegation, isn’t decided by just one fixture but throughout the season but has struggled all season long, though they had started the campaign in high spirits having won their first three league games of the season. But seven points from their following ten fixtures saw a decline in form, and whilst they won several games in spits and spats, it wasn’t enough. 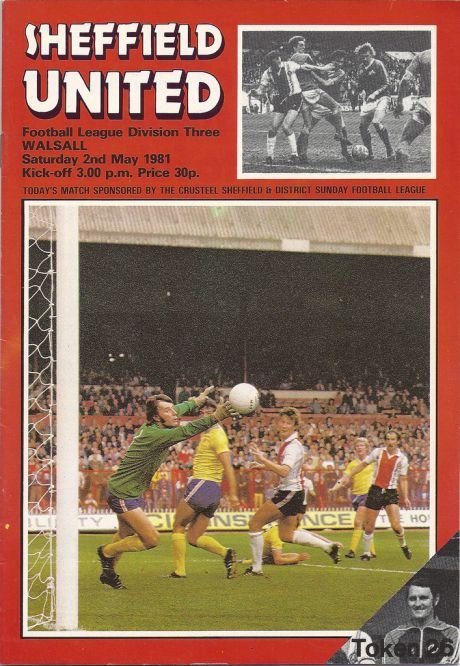 During the season, the poor run of form saw the Blades depart with manager Harry Haslam, who famously tried to sign Diego Maradona, and replaced with 1966 World Cup winner, Martin Peters, which turned out to be his only managerial position.

Sheffield United failed to win their final five league fixtures, but the decisive blow came on the final day, at home to fellow relegation strugglers Walsall, on 2nd May. The pair had previously drawn 4-4, and the Blades required just a point against the Saddlers on the final day at Bramall Lane. A draw or better against their relegation rivals would have seen the Blades retain their Third Division status with Walsall being relegated in their place.

The game itself was even and as the 90 minutes was drawing to a close, and with the game locked at 0-0, it would have proved a satisfactory result. That was until, on 86 minutes, Alan Buckley was fouled by John MacPhail in the penalty area, which was duly converted by the happily named Don Penn, to hand the opposition the lead.

At this point, relegation to the Fourth Division loomed, until they were handed a lifeline after substitute John Horne handled in the area, and thus gifting United an opportunity to score from the penalty spot. Don Givens was handed the responsibility of taking the said spot-kick. The rest, as they say, is history, with the Sheffield Morning Telegraph reporting; “Givens, apparently gripped by nerves with the Club’s future depending on his kick, fired in a weak shot which goalkeeper Ron Green saved easily.” Though, it is believed that Givens wasn’t the first choice but stepped up to the plate in the 89th minute after the mysterious player shirked his responsibility.

It is considered one of Sheffield United’s less finest moments in football history, one that we’d gladly like to see go away, but will never be able to erase from the history books, and proving that not all history is good history.

United responded well, winning the Fourth Division at a cantor at the first attempt and despite yo-yoing through the ’80s between the Second and Third Division, the Blades finally were promoted to the First Division in 1990.